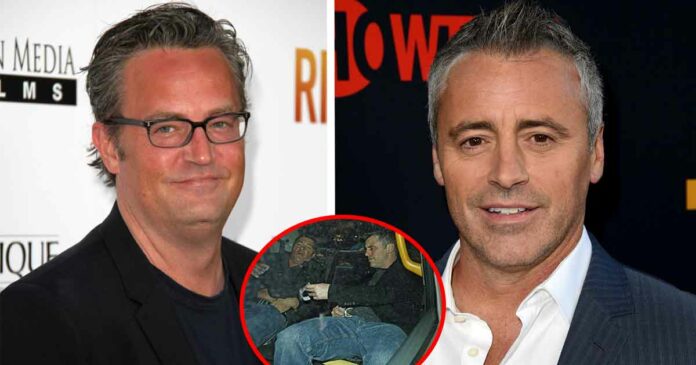 When FRIENDS first aired in 1994, it was just another sitcom. But as time passed, it became the biggest sitcom of the 90s that is still attracting new fans. The crazy lives of Monica Geller, Rachel Green, Phoebe Buffay, Chandler Bing, Ross Geller, and Joey Tribbianni were a huge hit. It showed them the heights of fame.

FRIENDS fans might think that they know everything about the show and the characters by now. But, do you know the secrets behind the scenes? or the real-life problems of the cast? You might know a few of them that has been revealed in the years. Let’s find out how many secrets do you actually know:

Many cast members of FRIENDS struggled with newfound fame. And, this struggle led Matthew Perry towards addiction. He didn’t even share his problems with Matt LeBlanc, his best friend. When he came to know about his problems, by that time Matthew was addicted to both boozing and some medicines prescribed by his doctor. Although, he was never created any scene on the set, but was always painfully hungover. However, after getting into rehab and getting clean, he is now okay and became passionate about helping others. And, in all this phase, Matt LeBlanc and the rest cast always stood by him and tried to be there for him.

No offense, but Phoebe actually is quite a terrible guitar player. She didn’t even know the names of the basic chords. Originally, she was going to be a good musician but because Lisa hated guitar, and because she refused to learn it enough, Phoebe too couldn’t be a good musician. She even suggested that her character play some other instrument that’s comparatively easier like bongos, but luckily that didn’t happen. Fortunately, Phoebe being a weird musician turned out to be one strong thing we loved about Pheebs.

In the episode “The One Where No-One’s Ready”, Chandler and Joey get into a fight over a spot on one of Monica’s chairs. At the moment, when they both were rushing towards the chair at the same time, Matt LeBlanc hit himself real bad. He revealed on Jimmy Kimmel’s show about the incident and said, “So we both race to the chair, and I have to step over the coffee table and land on this big, huge comfortable chair. I ended up completely upside down.” He further explained, “I was going to land on my head between the table and the chair, so I put my arm up to break my fall and exploded my shoulder.” You might remember the episode after that where Joey breaks his arm while jumping on his bed. Well, in reality, Matt had a broken arm in real, and to cover that up the writers introduced the ‘Jump on bed’ storyline.

4. Matt LeBlanc Was Arrested For Driving After A Booz

Matt LeBlanc was getting used to the party lifestyle after becoming a celebrity. But, he got arrested for driving after boozing twice and all this happened after the FRIENDS show ended. He admitted that when he was young and stupid, he never drove fast, just crooked. However, Matt refuses all these incidents now maybe as the product of his age.

While Matthew Perry was dealing with his addiction in rehab, Matt was dealing with his own demons in the form of newfound fame. The star had a nervous breakdown when the show came to an end. He barely left the house and wanted to stay away from any schedule. He was completely burned out and bummed. But, later he pulled himself together and did amazing shows such as Man With A Plan, Episodes, and many more. And you surely would have seen him in Top Gear.

In 2010, David Schwimmer bought a property in the East Village. He decided to tear the whole thing down instead of renovating it to keep the facade. Because of that, an anonymous neighbor left a message for him. On the construction site fence, “Ross Is Not Cool” was written in huge letters. This resulted in a feud with his neighbors. The true FRIENDS fans will remember that this also happened in the show when Ross denies chipping in for the maintenance man’s retirement gift.

7. Chandler’s Awkwardness Is Based On Matthew Perry

Each FRIENDS character somehow resembles their own personality such as Rachel’s style, Joey’s womanizing, Monica’s freakiness. And Chandler’s character was really based on Matthew Perry. His awkwardness with women comes from his real-life characteristics. It came from a conversation with the producers that Matthew had about his own life. In real life too he emphasizes the word “be” but not exactly like Chandler. However, both traits were amped up for the show.

8. The Rest Of The Cast Was Afraid Of Matt LeBlanc

It is hard to believe that someone can be afraid of Joey aka Matt LeBlanc. But, this is true, and because of his background, other cast members were afraid of him. They Knew that Matt had done a stint as a male model and was raised by a mechanic. Although when they met him, they understood how wrong they were. Jennifer said, “I was scared of that type of guy. He thinks it’s very funny now. And actually, he can sit down and comfort me just like Courtney or Lisa could.” Later, he turned out to be the most fun guy to be around.

Someone who lived through the 90s knows that how famous Rachel’s short layered hairstyle was. It was the iconic hairstyle that needed a name because women immediately asked their hairstylists to recreate the iconic hairstyle for them. But, the one person who hated it the most was Rachel aka Jennifer herself. She said that the hairstyle was kind of cringy for her. According to her, it was the ugliest haircut she has ever seen. It appears that she just wore that hairstyle for the shot. However, her style became so famous that even supermodels and celebrities were getting that iconic short layered hairstyle.

David Schwimmer also struggled with fame and has shied away from the limelight most. Although he did work after the show ended, most of them were voice work, producing, or directing. Being in such a hit show at such a young age messed him up. Later he opened up about his situation and said, “It made me want to hide under a baseball cap, not be seen.”

Read more: Counting Down The Uproarious Scenes From FRIENDS