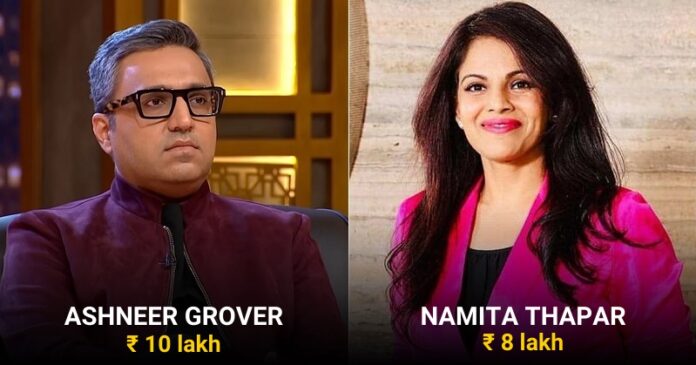 The television reality shows Shark Tank India has become the talk of the town from the beginning. The Indian version of the popular American business reality show is loved by all the viewers. In this reality show, entrepreneurs pitch their ideas to the sharks. The sharks take a stake in the company in exchange for investment if they like the idea. If you don’t know, the show has 7 sharks – Aman Gupta, Vineeta Singh, Ashneer Grover, Peyush Bansal, Anupam Mittal, Namita Thapar, and Ghazal Alagh.

With its interesting business presentations, the show has managed to capture the attention of viewers. Besides that, it also got popular over social media with hilarious memes. The reaction of the 7 sharks has been turned into memes by the netizens and they are all over social media. The 7 judges have now become so popular that they recently were guests on Kapil Sharma’s show. Undoubtedly, it was a treat for their fans to see a different side of their personality.

We are sure you too are in love with the jury members if you have been following the show regularly. However, have you ever wondered how much money these Shark Tank India judges make per episode? Well, continue reading to know the truth.

Aman Gupta is the Co-Founder and CMO of the famous brand boAt. We all know, boAt is the leading headphone and earphones brand. The net worth of the shark is estimated to be 100 million dollars. Besides that, if we talk about his personal life, he is married to Priya Dagar, a senior policy advisor at the Embassy of the Netherlands. Reportedly, he charges a salary of INR 9 Lakh per episode.

Vineeta Singh is the founder of one of the leading cosmetic brands in the country, Sugar Cosmetics. She was also a new mom when she started her brand and juggled between work and motherhood. Besides that, she is married to Kaushik Mukherjee. As per the sources, Vineeta Singhcharges INR 5 Lakh per episode on Shark Tank India.

Ashneer Grover has quite a different reputation in Shark Tank India. He is the MD and Co-Founder of BharatPe. He doesn’t really mince his words while sharing his opinion and is quite blunt when it comes to his opinion on business pitches. As a result, he has been trolled for being rude on the show many times. Regardless of that, this shark charges INR 10 Lakh per show.

We all know that Lenskart is an optical prescription eyewear retail chain that is very famous. And, Peyush Bansal is the Founder and CEO of Lenskart. His net worth is INR 600 Crores and he reportedly charges INR 7 Lakh per episode for the show. Peyush Bansal will be recreating the pitch in the last week of the show that he gave for his company in the year 2010.

Anupam Mittal is one of the most loved sharks on the show. He is the CEO and Co-Founder of Shaadi.com. Ever since the show began, his social media fan following has been growing. Interestingly, Anupam Mittal is now quite active on social media. He often shares his reactions to all the memes flooding the internet. Besides that, he is married to model Aanchal Kumar. Interestingly, this shark charges INR 7 Lakh per episode on Shark Tank India.

Namita Thapar is one of the most talked-about sharks on the show. She is the Executive Director of Emcure Pharmaceuticals Ltd. The turnover of the entrepreneur is around $870 million. On the personal front, she married a businessman, Vikas Thapar. Reportedly, she charges INR 8 Lakh per episode in the show.

Gazal Alagh is the Co-Founder and Chief Innovation Officer at Mamaearth. With her husband Varun Alagh, she founded this company. If you don’t know, it is a leading natural and toxin-free skincare products brand. Reportedly, Ghazal Alagh charges INR 8 Lakh per episode on Shark Tank India.

We will soon witness the finale week of Shark Tank India and are surely going to miss the show. However, the good news is that the second season of the show is likely to come back soon. So, tell us who is your favorite judge on the show.