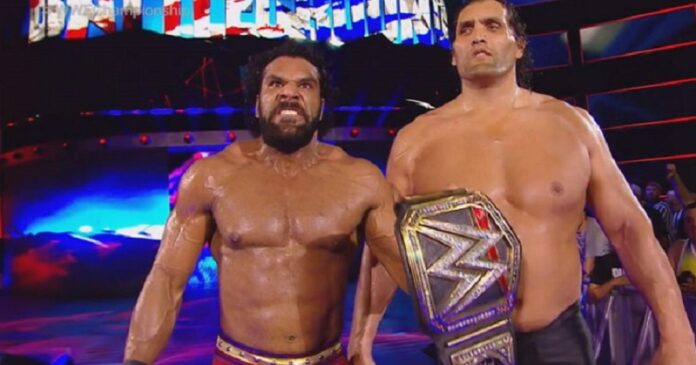 Indian sports enthusiasts have grown up watching The Rock, The Undertaker, and Stone Cold Steve Austin. Steve Austin, John Cena, and a slew of other hard-hitting superstars compete in the ring, outside the ring, and everywhere in between. Given the popularity of entertainment sports in the nation, WWE has made a concerted attempt to integrate Indian wrestlers in WWE or of Indian heritage into its fold. India is one of WWE’s most significant untapped markets. And today, these desi artists have made a name for themselves in the realm of sports entertainment. While WWE continues to expand its roster, we look at 15 Indian wrestlers that have made it big in WWE.

Here is the list of 15 WWE wrestlers from India who made India proud.

She is the first Indian lady wrestler to represent our country in WWE. She is also an international powerlifting athlete from India who won a gold medal at the South Asian Games. Devi acquired a deal with WWE in 2017, and she began training in January 2018. Devi has a son named Abhijeet and is married to basketball player Gaurav Tomar. Kavita cites ‘Great Khali’ as her primary source of inspiration. She has featured in several WWE special events, most notably the Women’s Royal Rumble.

Even among WWE fans, we recognize that this moniker may not be as well-known. However, the Indian wrestler was a part of the organization. While Mahabali Shera is no longer with WWE, he was one of the most promising wrestlers of all time. He appeared to be the face of Indian wrestlers in WWE in the future, but that was not to be. According to rumors, he was let go by WWE.

Lovepreet Sangha, an Indian wrestler, was formerly a well-known WWE star. He is currently out of the game. In the rings, Lovepreet Sangha was known as Kishan Raftar. He was a member of WWE’s NXT brand. Sangha was the only Indian pro-wrestler to join WWE after The Great Khali. He made his WWE debut on September 26, 2015, in the battle of the royals match, after joining the company. Baron Corbin and Samoa Joe won the bout. He beat Jason Jordan on January 15th, 2016. Raftar continued his winning streak by defeating Chad Gable, Jason Jordan’s partner in the tag team bout. Raftar’s contract with WWE expired on May 13, 2015.

Sunny Dhinsa, better known as Akam, is an Indian-origin wrestler. In April 2015, he made his WWE debut on NXT. His lethal maneuvers, such as the Pumphandle Death Valley Bomb, quickly earned him a fan favorite. He won the Canadian national freestyle wrestling title in 2011, 2012, and 2013. Razar and Akam won the WWE Raw Tag Team Championship as well as the WWE NXT Tag Team Championship. In 2016, the tandem also won the Dusty Rhodes Tag Team Classic tournament.

Gurvinder Singh Malhotra, sometimes known as Shanky Singh, is a well-known Indian wrestler in WWE. Gurvinder is a former CWE World Heavyweight Champion. He joined Continental Wrestling Entertainment in 2015 when he was only 24 years old (CWE). He won CWE’s inaugural royal rumble bout on February 28, 2016, in Dehradun, India, versus super Khalsa. Later, in the year 2020, he was chosen by WWE. Shanky won the Battle Royal on September 5, 2016.

Ring Debut of The Singh Brothers: 2017

Rinku Singh Rajput rose to prominence after winning the reality television show Million Dollar Arm in 2008. He was later signed by the Pittsburgh Pirates and spent many years in minor league baseball. Million Dollar Arm is a film based on Rinku Singh Rajput. Later, after signing with NXT in 2018, he transitioned to professional wrestling. He made his WWE debut against Kassius Ohno in a single bout. Soon after, he was placed in a tag team bout alongside Sourav Gurjar. The pair made their television debut earlier this year.

Giant Zanjeer, who is 7 feet 2 inches tall, is the tallest Indian athlete to perform in WWE since The Great Khali. Sukhwinder Singh Grewal is the true name of Giant Zanjeer. Jargaon, Punjab, is his birthplace. After competing in the WWE India Tryout in Mumbai, Sukhwinder was chosen for a WWE Developmental Contract in 2019. He was trained by another Giant Great Khali to compete in the big event.

Guru Raaj is WWE’s first high-flying Indian wrestler. Laxmikant Rajpoot is his given name. Guru is from the Uttar Pradesh district of Banda. Guru Raaj put on a brave performance in his first-ever match at WWE Superstar Spectacular against former Universal and NXT Champion Finn Bálor, who was taken aback during an interview when he learned that his opponent was in fact participating in his first match. A great Indian wrestler in WWE.

Jinder Mahal is the most recent WWE star, having gained considerable success in the WWE ring. We’re talking about Jinder Mahal, the ‘Modern Day Maharaja’ (original name: Yuvraj Singh Dhesi). The six-foot-tall guy conquered the WWE circuit, winning the WWE Championship title several times, most notably in 2017-18. In 2010, the Indo-Canadian professional wrestler made his debut. After a brief alliance with his fictional brother-in-law The Great Khali, Mahal was largely used as an enhancement star throughout his early WWE tenure, forming the trio 3MB with Heath Slater and Drew McIntyre before both Mahal and McIntyre were dismissed in 2014. One of the most successful Indian wrestler in WWE.

This list would be incomplete if one of the world’s most famous wrestlers was not included. Yes, you got correctly: the ‘Great Khali.’ Dalip Singh Rana, who is from Himachal Pradesh, is one of WWE’s classics. He was a Punjab state police officer before taking up wrestling. Did you know he’s been in four Hollywood films, two Bollywood films, and a number of television shows? In 2007, the seventh-tallest professional wrestler in history won the World Heavyweight Championship. One of the most recognized WWE wrestler from India.

Only a handful of you may be familiar with him. Gadowar Singh Sahota, from Punjab, immigrated to Canada with his father when he was nine years old. Gama Singh, as he was known in the wrestling world, excelled in amateur wrestling as a youth. In the early 1970s, he began his professional wrestling training under the legendary Stu Hart. He began wrestling for the World Wrestling Federation in the early 2000s (WWE). Besides that, he mostly performed at WWE untelevised events. He was a competent mat wrestler who occasionally scaled the ropes.

Dara Singh Randhawa, born Deedar Singh Randhawa on November 19, 1928, in Dharmuchak, Amritsar District, Punjab, British India, is an Indian elite wrestler, entertainer, and lawmaker. He began his wrestling career by training with Harnam Singh at the Great World Stadium. He was 6 feet 2 inches and 1.88m tall as an adult, weighed 127 kg 280 lb, and had a chest measurement of 53 inches (130 cm). Because of his physical characteristics, he was encouraged to learn pehlwani, an Indian style of wrestling. He is well-known for his unbeaten overall record in wrestling and afterward for his success as a motion film star. One of the most famous Indian wrestling WWE.

Jeet Rama is a Haryana wrestler who was born Satendar Dagar. Dagar was born on January 12, 1981, in Sonipat, Haryana, India. Jeet is a wrestler from Sonipat who is signed to the WWE NXT brand. Satender, along with individual Indian enlist Love Preet Sangha, had been marked by WWE on June 2, 2015, and responded to the WWE Performance Center for training. On September 29, 2015, he made his in-ring debut at an NXT live event in Fort Pierce, Florida, competing in a single fight. On January 15, 2016, he made his WWE singles debut under the ring name Jeet Rama, defeating Chad Gable in a WWE live event in New Delhi.