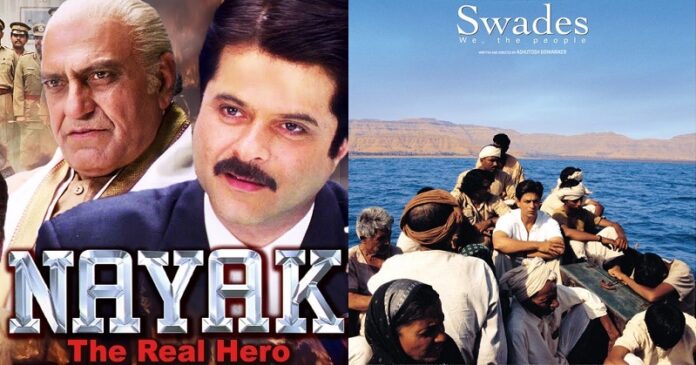 The South Film Industry has always been an inspiration for the Hindi film industry. Since the Seventies, remakes have been the staple diet for Bollywood. Most of the famous Bollywood movies are based on South Indian Movies. It does not mean that Bollywood is not creative enough. There are Bollywood movies that are remade in the South film industry as well. However, today let’s check out the list of South Indian movies that are remade in Bollywood.

This movie was remade after the huge hit of the Tamil film “Thevar Magan”. “Virasat” is a Full Action-Drama film that is penned by Kamal Haasan. “Virasat” received sixteen nominations at the 43rd Filmfare Awards. The blockbuster movie features Anil Kapoor, tabu, and late Amrish Puri in lead roles.

The film was a remake of Mahendra’s own 1982 Tamil film “Moondram Pirai”. Combo of Romance and Drama, this movie stars Kamal and Sridevi in lead roles. Even though this movie commercially failed, Sridevi’s performance was widely praised.

This movie is a remake of the 1995 Tamil film “Sathi Leelavathi”. “Biwi No.1” is a Comedy- Classical Drama film produced by Vashu Bhagnani and directed by David Dhawan. The film was remade in India in 1999, and it featured Karishma Kapoor, Sushmita Sen, Anil Kapoor, Salman Khan, and Tabu.

“Judaai” is a melodrama comedy film that is the remake of the Telugu film “Subhalagnam”. This movie is directed by Raj Kanwar and featured Anil Kapoor, Sridevi, and Urmilla Matondkar in the lead roles. The film was widely praised for the performances of the actors.

The film is a remake of the Telugu film “Hello Brother” (1994). This action-comedy film was produced by Sajid Nadiadwala and directed by David Dhawan. The original South Indian film was inspired by the Hong Kong action-comedy film “Twin Dragons” (1992).

This movie follows the storyline of a TV show “See The Man Run”. Later, it was copied by the Malayalam Film Industry in the name of “Ramji Rao Speaking”. After that, Bollywood remade it as well with the name of “Hera Pheri”. It is an all-time favorite movie for all movie lovers.

“Saathiya” is a romantic drama film produced by Mani Ratnam and Yash Chopra and directed by Shaad Ali. With Shah Rukh Khan and Tabu in special appearances, we see Vivek Oberoi and Rani Mukerji in lead roles. This movie was one of the best romantic movies in India.

Applauding the performances of Kapoor and Puri, critics gave mixed reviews to “Nayak”. People clapped at the performances of the cast and special effects. This movie is a re-creation of a Tamil-language film “Mudhalvan” that is directed by S. Shankar in Bollywood.

This fantasy film is a remake of the Kannada language film “Nagamandala”. Interestingly, the working title of the movie was “Ghost Ka Dost”. However, later it changed to “Paheli”. This movie was India’s certified entry to the 2006 Oscars.

The film was well-thought-out and was ahead of its time. Shahrukh’s presentation in this film is one of the finest performances of his profession. The film was produced and directed by Ashutosh Gowariker. Swades is inspired by the Kannada novel “Chigurida Kanasu”.

This film has been regarded as one of the best Bollywood films and has gained a cult following. It is a remake of Priyadarshan’s own 1985 film “Boeing Boeing”. Akshay Kumar was awarded best actor in a Comic Role for the film “Garam Masala”.

“Bhool Bhulaiyaa” is a psychological horror comedy film produced by Bhushan Kumar and Krishan Kumar and directed by Priyadarshan. The film was a vast profitable success and received universal critical acclaim. It also attained cult status in Hindi cinema.

This is a remake of Murugadoss’s own 2005 Tamil film of the same name. “Ghajini” is an action thriller film written and directed by A. R. Murugadoss. It turned into the highest-grossing Indian film of the year in 2008. Besides that, it is also the foremost Bollywood film to cross the ₹100 crore mark.

The film is a remake of the 2013 Malayalam-language film. “Drishyam” was directed by Nishikant Kamat and was jointly produced by Ajit Andhare, Abhishek Pathak, and Kumar Mangat Pathak. It grossed ₹1,110.5 million worldwide and ₹938.5 million in India.

A remake of the 2006 Telugu blockbuster “Vikramarkudu” is based on an original story written by K. V. Vijayendra Prasad. The Hindi-language action-comedy film was produced by Sanjay Leela Bhansali and Ronnie Screwvala and directed by Prabhu Deva. The film was declared a blockbuster at the box office.