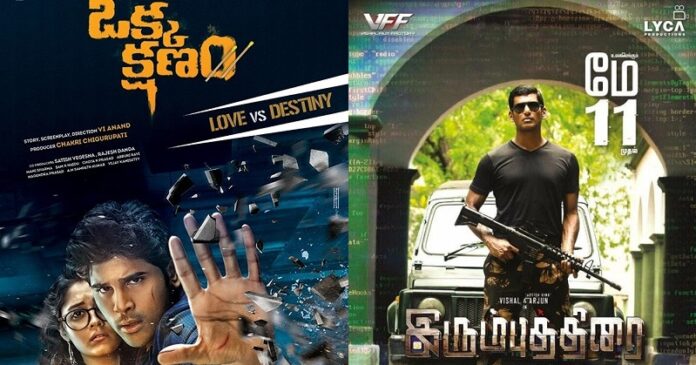 The South Indian thrillers have always rocked the world for Indian viewers. And when it comes to suspense thriller movies, the Southern film industry is perceived as the one making great films. The Southern movie-makers came up with the most eccentric ideas that surely win the hearts of people of the entire nation. And if we talk about South Indian suspense thriller movies, they have always given us amazing and remarkable movies. Fortunately, many of these movies are dubbed in Hindi as well for the Hindi cinema viewers.

So, without any delay, let’s check out some of the best Tamil suspense thriller movies that are dubbed in Hindi for South Indian movie fans.

The story of this critically acclaimed suspense-thriller movie revolves around a police officer who lost his leg while investigating a strange murder. He is forced to relive his past through a new case years later that has some shocking twists and turns just like his last case.

This Shyam Dhar film is one of the best Tamil suspense thriller movies with twists and turns. A suspended officer is trying to solve a twisted mystery until the final scene of the film. It will blow all expectations in the end.

This movie comes under one of the best South Indian suspense thriller movies dubbed in the Hindi list. It featured Mahesh Babu who is a rock star suffering from a mental disorder because of his parent’s death. To seek revenge for his parent’s death, he must overcome his psychological inhibitions.

“Thani Oruvan” is undoubtedly one of the well-known Tamil movies dubbed in the Hindi list that features Jayam Ravi, Arvind Swamy, and Nayanthara in the lead roles. The story of this movie revolves around an IPS officer and a rich scientist. The scientist is profiting from secret illegal medical practices and the IPS officer wants to arrest him.

“Vikram Vedha” is one of the best South Indian thriller movies starring V Sethupathy as a smuggler and R Madhavan as a cop. In this movie, Vikram is on the search to arrest Vedha. Later, Vikram realizes that Vedha is a complicated man as the movie progresses and has his reasons for taking up the path of crime.

It is a 2017 Tamil science fiction-cum-mystery-thriller film that stars Sundeep Kishan and Lavanya Tripathi in the lead roles. The story revolves around a police officer who is on a mission to arrest a criminal. Interestingly, that criminal murders in the same mysterious pattern. It is undoubtedly one of the best Tamil movies dubbed in Hindi.

It is a 2013 Indian Malayalam psychological crime thriller film directed by Rosshan Andrrews. This movie stars Jayasurya, Prithviraj Sukumaran, and Rahman in the lead roles. On the other hand, Kunjan, Aparna Nair, Hima Davis, and Deepa Vijayan appear in the supporting roles. This is one of the best South Indian suspense thriller movies that is dubbed in Hindi.

“Drushaym” is a story about crime surrounding a Maharashtrian family whose head is Vijay. The suspense begins when the son of a willful IG Meera Deshmukh goes missing. Since the boy last visited Vijay’s family, they become the prime suspect in the crime. The film shows how a middle-class man fights to protect his family from powerful government.

Featuring Kamal Hassan in the lead role, “Vishwaroopam” is one of the best Tamil movies dubbed in the Hindi list. In this film, you will experience many twists and turns that you might not have anticipated. Since Kamal Hassan is also the writer and director of the movie, we all know that this is surely one of the must-watch South thriller movies.

A young journalist, Rachna is horrified at the number of illegal U-turns that resulted in a traffic accident. She finds herself in the middle of a police case while pursuing the evidence. As a result, she gets caught in dealing with a series of murders. She became a part of the investigation process in her attempts to free herself from false accusations.

With interesting twists and excellent performances, “Kavalu Daari” comes under one of the well-known Tamil movies Hindi dubbed list. The story revolves around a bored police officer who wants to join the crime department. The twist begins when he starts investigating off-the-record cases and gets involved in a strange unsolved case from 40 years ago.

“Ratsasan” is a horror psychological crime suspense thriller South Indian movie. It features Amala Paul, Ammu Abhirami, and Munishkanth in the lead roles. The story revolves around a filmmaker who gives up his goal after his father’s death and becomes a police officer. However, he gets involved in a psychotic case where the killer preys on school girls.

This is a cybercrime suspense thriller movie where a trainer at a computer institute is caught for a cybercrime one day. Even though he dreamt to be an entrepreneur, his goals were put on hold because of the accusation of cybercrime. “Gultoo” is one of the best Tamil movies Hindi dubbed list.

Featuring Yasmin Ponnappa, Ravi Krishna, and Jackie Shroff in the lead roles, “Aaranya Kaandam” is undeniably one of the best South Indian suspense thriller movies. In this movie, an elderly mobster plans a great plot to defeat his arch-enemy. After that, all the twists and turns begin.

“13B” is a story of a family who shifts to a new apartment and experiences that events on the show are weirdly paralleled by occurrences in his family’s real life. Even though the entire family becomes addicted to the show, R. Madhavan (Manohar) decides to examine the incidents himself in order to protect his family.

“Ezra” is another suspense thriller movie where the couple experiences some paranormal activities when the wife brings an antique box to the home. It is one of the best South Indian thriller movies that features Priya Anand, Prithviraj Sukumaran, and Sujith Shankar in the lead roles.

“Anjaam Pathiraa” is yet another suspense thriller South Indian movie that revolves around solving a unique pattern of serial killings that has to be solved as soon as possible. In this film, Kunchacko Boban, Unnimaya Prasad, and Nandhana Varma played the lead roles.

Featuring Prithviraj Sukumaran, Meghana Raj, and Miya George in the lead roles, the story of the South Indian film “Memories” revolves around an alcoholic cop. After witnessing the murder of his wife and children, he gets emotionally involved in the case of the kidnapping of young married men.

Portraying Charmy Kaur, Jagapathi Babu, and Shashank in the lead role, “Anukokunda Oka Roju” comes under one of the best South Indian thriller movies. The story of this movie revolves around a girl who is trying to remember what happened the night of the party as she is pursued by two assassins who are aiming to kill her.

Even though this movie got mixed reviews from film critics, the audience still loves the movie a lot. The plot of the film revolves around the lead character getting framed under wrong charges while joining the RAW. Perhaps that is why this movie comes under one of the best South Indian suspense thriller movies dubbed in the Hindi list.

It is a 2005 Indian Tamil-language action thriller film. In this movie, Vikram is the main lead as Ambi who is an idealistic and law-abiding lawyer. He has multiple personality disorders about which he is unaware of and develops two other identities, that is, a murderous vigilante named Anniyan and a metrosexual fashion model named Remo.

This is one of the best South Indian thriller movies that featured the debutants Avantika Shetty, Radhika Chetan, and Nirupa Bhandari. The story is depicted in a village where Gowtham and his wife, Indu visit her ancestral home in a small village. In the process of finding her, Gowtham begins to unveil some mysteries of his life as his wife goes missing.

This P.S. Mitran movie is an endeavor to change the world of suspense thriller Tamil movies dubbed in Hindi. This movie carries expanding social relevancy in the context of contemporary Facebook and Aadhar leaks and creates awareness of the vastness of cybercrime and data theft.

“Pencil” is one of the most popular Tamil movies dubbed in Hindi that features Sri Divya, Shariq Hassan, and G.V Prakash Kumar in the lead roles. The story revolves around the murder of a student and to know the culprit, you need to watch the movie. If you don’t know, the film is inspired by the film 4th Period Mystery.

The sequel of Drushyam is again a roller coaster ride. It is one of the best crime thriller movies whose story revolves around the same family. One of the two factors that make the movie more interesting is the same cast and the other is the acting of the actors.

“Visaranai” is one of the best South thriller movies that also comes under the Hindi dubbed movies list. This movie shines a light on police corruption, the never-ending battle between good and evil, and the misery of the immigrant class. Perhaps that is why this movie has received recognition worldwide.

“Okka Kshanam” is one of the most popular Hindi dubbed movies from the South film industry. In this film, you can experience the concept of a parallel universe. Interestingly, the story revolves around a couple who loves each other very much. However, the twist comes when in the parallel universe life, one of them kills the other. And, then they both try to change it to the present.

Featuring Arun Vijay, Tanya Hope, Smruthi Venkat, and Vidya Pradeep in the lead roles, this movie revolves around the lives of two twin brothers. Even though they look alike, they are quite different. The interesting part comes in when they both get involved in the murder case.