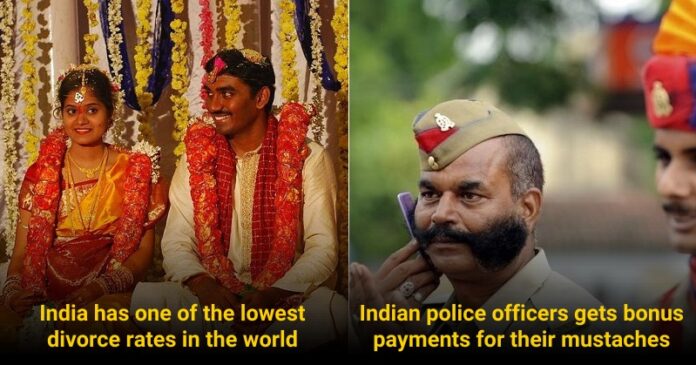 Undoubtedly, India is one of the most amazing countries in the world. It impresses us with its traditions and culture, strikes us with its contrasts, and stays a secret for most foreigners.

Here is the list of 15 amazing facts about this country that will show India from a completely different side. Let’s check it out:

There are 6 seasons in India according to the Hindu calendar. These seasons are winter’s eve, monsoon, spring, winter, autumn, and summer.

Indians bobble their heads from side to side, instead of common nodding. It looks more like a condemnation rather than an answer meaning “yes.”

3. Largest Vegetarian Country In The World

If you don’t know, 60% of Indians are vegetarians. Vegetarianism is one of the traditional features of Hinduism. India has the lowest percentage of meat consumption per capita.

India uses 2 official languages, that is, Hindi and English. However, the government accepts 17 other languages too. Overall 1,650 dialects are found around the country.

Even though 80% of Indians are Hinduism adherents, the country includes all the world’s major religions. You can meet followers of various religions such as Sikhism, Jainism, Buddhism, Judaism, Christianity, and many more.

6. Biggest Family In The World Lives In India

The man who has the biggest family in the world has 39 wives and 94 kids and lives in India.

7. Police Are Paid For Their Mustaches

If Indian police officers have a mustache, they are given bonus payments. Arguably, mustaches make men more manful and reputable. Also, it’s an essential feature of Indian folklore.

Each cow should have an ID card with a photo in West Bengal.

70% of all spices are produced in India which are provided to the world market.

India’s population is approaching 1.5 billion at present. It’s higher than anywhere else around the Western Hemisphere. India will soon be able to outrun China according to the UN.

India has the lowest divorce rates in the world. In India, only 1 marriage out of 100 ends in divorce.

12. New Ways To Use Popular Beverages

Instead of expensive pesticides, Indian farmers use Coca-Cola and Pepsi.

In India, housewives own 11% of the world’s gold. That’s more than the combined stocks of the International Monetary Fund, Germany, Switzerland, and the USA.

India controls Sentinel Island. It is a territory that remains virtually unaware of modern civilization.

India is the homeland of chess. The ancient name of this game is “Chaturanga”. It means “4 divisions of an army”, namely, infantry, cavalry, chariots, and elephants.