Ukraine has been invaded by the Russian forces, which has led to panic and fear in the hearts of thousands of parents in India whose children are left stranded in a country where bombs and missiles are being dropped and air raid sirens are being sounded out.

India is making efforts to evacuate its citizens from the conflict zone but the situation became even riskier after Ukraine decided to close its airspace.

But have you wondered, Why such a big number of Indian students are studying medicine in Ukraine? , or What is happening to them right now, and what are the advantages of studying in Ukraine? 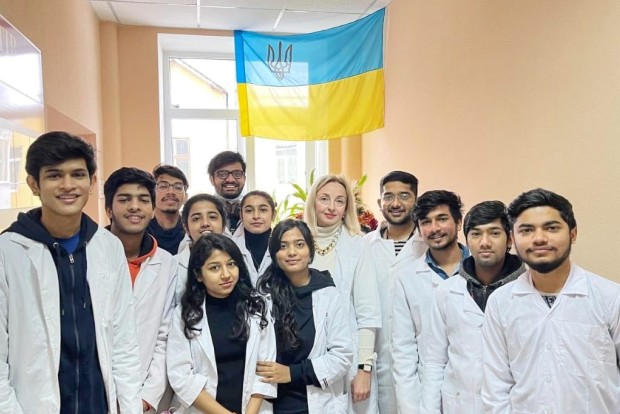 Why medicine in Ukraine?

Ternopil, Ukraine | Indian students request the govt to bring them back to India

“We came to Ukraine for studies. We are requesting the Government and our Embassies to take us back to India as soon as possible,” said two Indian students pic.twitter.com/k3AdiVONXt

“We feel helpless. Three-four bombs have struck the city since morning. We are running low on supplies. Air routes are closed. I request Narendra Modi ji and Yogi Adityanath ji to make arrangements for evacuation of Indians as soon as possible.”

Another Indian student Nilesh Jain, studying in western Ukraine’s Ternopil, said that he and other people have been stuck at the metro station for nearly 30 hours. Jain said-

“The internet connection is not good. We can hear bombs exploding. Please help us. I appeal to PM Modi ji to evacuate us from here quickly.”

Indian students have taken Shelter in the basement of a University in Kharkiv, Ukraine. They are worried as Food, money, essential supply running out.#StopWar #RussiaUkraineConflict pic.twitter.com/FPLg5JFjq1

As reported by PTI, as Ukrainian stores have stopped trading dollars, many students were not able to exchange their currency.

“We don’t know what to do. We appeal to the Indian government to rescue us as soon as possible.”

Why the students didn’t leave earlier?

The Indian embassy advised the citizens to leave prior to the invasion on Thursday, then why the students didn’t leave Ukraine? Here are the answers:

According to News18, another medical student quoted-

“Travel agents are exploiting the situation to mint money. We don’t have so much money. The news of this Russian-Ukraine conflict actually gave them an opportunity to push flight ticket booking charges citing the troubled situation over here, what can we do? We cannot afford this.”

What are they supposed to do now?

Harsh Vardhan Shringla, India’s foreign secretary assured all Indian citizens by saying that the government would take all possible steps to bring them back safe and sound, including students, in Ukraine and their family members.

The Ministry of External Affairs reported to the News agency ANI teams are being sent to the land borders with Ukraine in Poland, Hungary, the Slovak Republic, and Romania to assist the evacuation of Indian nationals.

“To assist in the evacuation of Indian nationals from Ukraine, MEA Teams from @IndiaInHungary, @IndiainPoland, @IndiaInSlovakia, and @eoiromania are on their way to the adjoining land borders with Ukraine.”

To assist in the evacuation of Indian nationals from Ukraine,MEA Teams from @IndiaInHungary, @IndiainPoland, @IndiaInSlovakia & @eoiromania are on their way to the adjoining land borders with Ukraine.

Indian nationals in Ukraine near the border points can contact these teams ⬇️ pic.twitter.com/OSd90I4DGH

Ambassador of India in Ukraine, Partha Satpathy, said that the embassy in Kyiv would continue to operate till every Indian is evacuated.

“The Embassy of India in Kiev continues to operate round the clock 24X7. Today morning we woke up with the news that Kiev is under attack, the whole of Ukraine is under attack. This has generated a lot of anxiety, uncertainty, and created tension. I would like to assure all of you that the Embassy of India continues to operate around the clock looking out for the safety and security of Indians here,” he said.