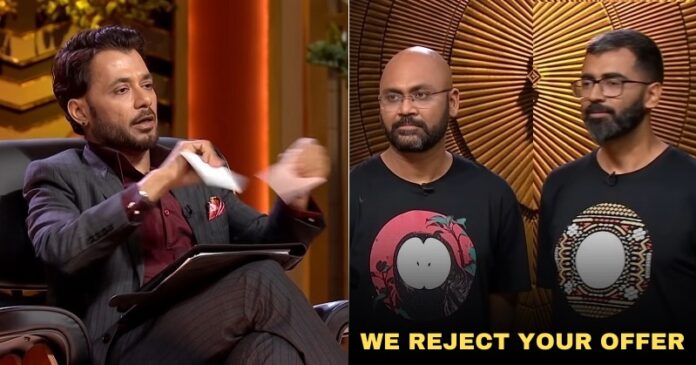 Shark Tank India, the business reality show has piqued the attention of the audience since its first episode aired on SonyLIV. The show introduced us to the world of entrepreneurship. In this most talked-about show, aspiring entrepreneurs pitch their unique business ideas to the judges of the show, also known as the Sharks. The judges offer to fund if they find the contestant’s business ideas interesting in return for shares in their firm.

Some of the pitches made a huge impact and triggered responses from the judges. Over the 100 pitches, some managed to grab the attention of the judges and the audience while some raised a lot of questions. As entrepreneurs, both seasoned and hopeful took the stage to pitch their ideas for investments, it was not surprising that some moments would cause friction between them and the sharks, some of which also gave rise to several hilarious memes.

A wide range of products and services were displayed by the young entrepreneurs. Numerous food and beverage firms made the most impact on the judges and successfully received offers on the programme. One such noteworthy pitch is mentioned below:

One such memorable pitch came from entrepreneur duo, Rohan Rehani and Nitin Vishwas, co-founders of Moonshine Meadery, recognized to be one of the country’s and continent’s first-ever mead companies.

Moonshine Meadery is Asia’s largest and India’s first meadery company. Rohan Rehani and Nitin Vishwas who founded the firm in 2018 are childhood friends, their purpose was to bring back mead which is the oldest alcoholic beverage. It is created by fermenting honey with water, sometimes with various fruits, hops, or spices.

The alcoholic content in the beverage ranges from about 3.5% ABV to more than 20%. Since ancient times Mead has been produced throughout Europe, Asia, and Asia. Mead also holds a prominent position in some Mythologies.

A new video has been released by Sony for their programme pitch, which showcases their previously unseen pitch and their arguments.

The founders pleased all of the Shark Tank India judges with their product and industry knowledge. Rehani and Vishwas had requested Rs. 80 lakhs for a 5% ownership in the firm, which prompted the sharks to make an alluring counteroffer which was very rare on the show. The duo received an offer from the five sharks together of Rs 1 crore for 2.5 % equity. The judges gave the candidates some time to think to consider the offer, but the sharks were taken aback by their response.

The Sharks (judges) were infuriated by the rejection of their original offer and the counteroffer they made. While Vineeta Singh referred to it as “insulting,” Anupam Mittal ridiculously stated that their goal of using Shark Tank to promote their business had been accomplished, he even went as far as ripping a check in front of them.