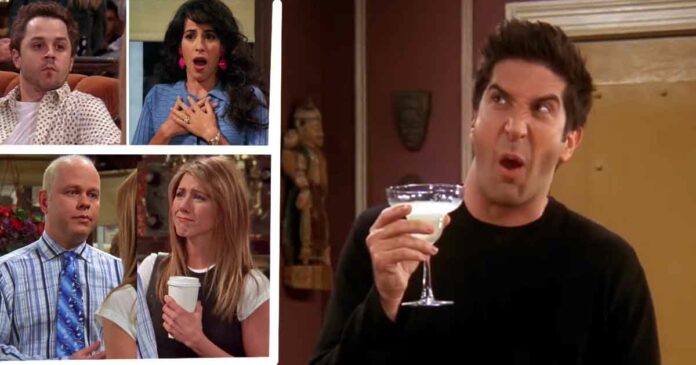 FRIENDS has given us some unforgettable pairs like Ross-Rachel, Monica-Chandler and we loved them all. The couples look so good on-screen that it sometimes becomes hard for fans to see them with their real-life partners. Didn’t you too feel that no one else other than Chandler was perfect for Monica? Personally speaking, I didn’t enjoy Courteney being with David Arquette. Instead, I wanted to see her with Matthew Perry always! Though we got many pairs from the show that we can never forget but still don’t you think there was scope to be more dramatic while pairing up?

Well, I can’t say about you, but in my mind, I have some really naughty pairs that could have been a hit or a nightmare! Either way we the fans would have got a lot of laughs.

Let me warn you, there’s no logic behind these pairs but it’s purely for fun. While pairing up I only imagined how funny the couple might be. Or maybe I was wondering how they are so opposite and how they would have fought as a couple or even weirder stuff. So don’t try to apply logic like when they appeared in the show or did they even meet or not. Rather try to picture the two characters in your head! You have watched the show enough to imagine your own episode so be the champ and design your own storyline and laugh out loud.

In case if you get some really funny lines in your head while imagining the couples then don’t forget to write them down in the comment section. Spread the joy always!

Now here we begin with the list of crazy pairs from FRIENDS that we might have enjoyed watching:

This is a couple everyone would enjoy watching. The cuteness of Joey and craziness of Phoebe will make them the perfect couple. They were already the best of friends who even had their dinner plans away from the group. And not just the emotional bond was great that they shared, but Phoebe had the wildness in her to spice things up for Joey every day and keep him hooked to her forever.

You might know it already that by the time Friends was going to end, the actors themselves pitched in the idea of showing Phoebe and Joey were closer than we thought. They wanted to include that Joey and Phoebe were always fooling around while everyone else was not aware of it. Unfortunately, the creators of the show didn’t approve the idea.

Gary came into Rachel’s life at a very disturbing time. She was staying with Ross to raise their baby but they were not together! And you know already how messy their relationship was! So Gavin’s entry was all waste of time.

However, if on a whole new level we imagine a plot where Gavin and Rachel continue their kiss and stay together after that. Won’t that be a great couple to bring give us that cute ‘awww’ moment? Gavin might have loved Rachel dearly while sweetly irritating her with his little pranks and replies. Also, he valued her work and supported her a lot.

Ross was so unfortunate to have got three divorces. But what if he didn’t have to give the first divorce? What if Carol was not only inclined to girls but Ross as well?

Ross would have lived a life that most men can just fantasize about. Only if the girls would have accepted him in the team, he would have been the happiest man in FRIENDS. And all other boys would be jealous to death!

In the whole TV series, I guess Gunther was the most loyal man. Never have we seen him look at any other girl apart from Rachel. But sadly, his loyalty was never answered.

What if Rachel would have given him a chance? I bet he would have pampered her like a goddess. He would have done anything in his capacity to keep her happy and all out of true love!

Phoebe loved David but their story could never flourish. Even in the episode where Phoebe said yes to Mike, we did have the feeling that Phoebe might say yes to David if he would have got the chance to propose. But their story ended abruptly and at some level, I felt bad for the guy.

I believe that instead of Mike if David would have married Phoebe then the scenes would have been more fun. We can’t compare the love of David and Mike because they are prime in their own way. But David would have given us more laughs with his weird actions and dialogues. And we would have got some more science flowing in and maybe at some point, he too might lose some logical conversation as Ross did to Phoebe.

Monica and Joey looked cute in the flashback episode. Their relationship was perfectly shown in the episode where Joey loved to eat and Monica loves to cook! How else can you make a perfect pair?

In the initial days of filming the FRIENDS, the creators wanted to bring Monica and Joey together. But the idea was later dropped because you know no one’s better than Chandler when it comes to being with Monica.

Janice might not be your favourite character but still sits in your head because the character was fun and powerful. Another character that we didn’t much like was Frank Buffay, Jr. So how would they look like together?

Imagine a scene where Janice is breaking up with Chandler and about to leave Central Perk. And just then Frank comes in and they see each other. Consider it love at first sight! Frank already has a record of falling for elder women so he falls for Janice and Janice somehow in dire need of a companion starts feeling for him.

Now once they get together, just imagine the amount of cringe they can be! Janice laughing at the lame jokes of Frank and all others going numb by the sheer dumbness. There will be madness all over Central Perk!

Amy Green, the self-centred girl who didn’t care for anyone and didn’t seem to have a heart. She was too rude to everyone but at some level did you notice that her insults were not all intentional? For her what she did was normal but for everyone else, it wasn’t. So the main problem with her was she never realized her fault because she didn’t know she was doing one.

On the other hand, Joey can be dumb at times and has cute looks. He is handsome enough to make a girl like Amy fall for him. So imagine a scene where Amy falls for Joey, and they have some romantic moments. Actually, rather than romance, they would give us more laughs. Two crazy heads dating can be exciting. Amy would continue showing her tantrums while Joey would support her and take stand for her without knowing the consequences. And their fights would also be embarrassing!

Mr Heckles was always a lonely soul living alone who loved to be whatever he was. It’s difficult to explain him but the guy was a complete genius! Now imagine a scene where Charles Bing comes in his son’s home. I know it’s not possible ever but just imagine!

So imagine a scene where Charles Bing is at Monica’s place and is singing some song as he does. In the very next scene, Mr Heckles knocks the door and says, “You are disturbing my wife’s sleep!”

Mr Heckles: “I could have a wife!”

Charles Bing: “Well, you seem to be single and handsome.”

Mr Heckles (this time nervous): “I am handsome and yes I could be single, so?”

Charles: “So…Let’s have some chat while your ‘wife’s’ asleep!”

The door closes and rest is left to your imagination……

Ross and Phoebe are two opposite characters. One believes in logic and the other, not sure she believes! So couple like this will be a rare combination. In the flashback episode, they were about to get together but that never happened.

In case, if their trial would have been successful then just imagine the disaster! Ross and Rachel fought over “We were on a Break!” but Ross and Phoebe would have fought upon “Evolution Is Real believe it!”

Hope you enjoyed going through the list. These were some crazy little ideas that came in my crazy little head. If you too have some names that could be a great couple then write them in the comments and make everyone laugh. Don’t shy away, your weird ideas can be funny as hell!