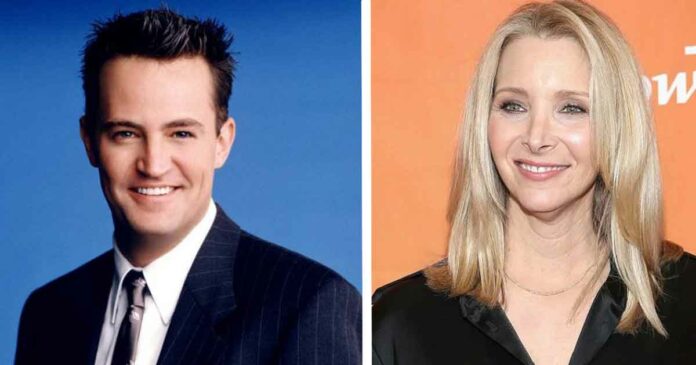 Friends is not just a show, it’s life. People watch it again and again and never get bored. But did you realize it earlier that it’s not just comedy they deliver? They show you a complete life where you see good and bad days both. You experience friendship, love, adulthood, parenthood, and more in a single series. On many occasions, you can picture yourself in the show. You can easily relate yourself to one or the other characters in the show.

There’s actually a lot of lessons we can learn from the show and we have tried to highlight a few for everyone to notice and realize. We all know it and when and where it was delivered, but we tend to miss the lesson often and focus on the laugh in the scene. But Friends is even more than just comedy and laughs.

Phoebe is the best example of being yourself. You might be different or you might be weird but one thing is inevitable, You are unique! So respect yourself and be proud of what you are.

Phoebe was not the best when it comes to music but she did it anyway and followed her heart always. She never cared for what others think or say. She wanted to live her own life and did it every moment. There’s a lot to learn from Phoebe indeed!

#2 Everyone Has Different Opinions, Respect That

Ross and Phoebe are two opposite characters and even more conflicting are their opinions and views. Remember the time when Phoebe engaged in a debate with Ross over Evolution. We loved the way Phoebe shattered Ross with her theories and comments.

In real life, no two individuals can have similar opinions ever and if they do then probably they should hang on to that person forever. But in reality, expecting similar opinions in two individuals is too much. Instead, we should accept the fact and try to live life with them in peace. You cannot change everyone’s opinion but you can make peace with them and stay happily.

Chandler left his job and waited enough to get the right job. Similarly, Monica got her big shot she deserved after quite a wait but it was worth it. She even had to fight her way but she kept going and tried to stay motivated always. And we all know about Joey, in life no one can be as defeated as Joey, but he showed us that patience can bring you great things.

So always stay motivated and good will come to you. What you deserve, you are ought to get, just wait for the right time.

#4 Past Can’t Define You

Rachel had a past where she lived like a spoilt little girl but her present was completely different. She earned everything and became the only girl her daddy was proud of. Also, if we look into the life of Phoebe then no one else can have a more messed up childhood than her. But Phoebe crafted her present in a way where everything was so different and wonderful.

Friends has taught us that the past always remains in the past. Our present can be different if we want it to be.

#5 In Love You Have To Compromise

Who can be better than Monica and Chandler when it comes to couples and relationships. They have shown us that people aren’t perfect but love is. In their relationship, Monica was the dominant one and Chandler had to obey her orders to keep her happy. And he never felt bad about it rather he enjoyed pampering her by making the boss.

In relationships, if you love someone and want your relationship to work then compromises are a must. Without doing sacrifice and compromise, it’s really difficult to maintain a relationship.

#6 Life Doesn’t Wait For Anyone

Life moves on always, people go and come but life never stops. When Monica and Richard broke up they were devasted at first. The pain they went through was genuine and it seemed like they would get back together soon. But they moved on and found an even better life for themselves.

Likewise, we should not stop in life. Whenever something wrong happens then maybe it’s time for you to witness something good soon enough. Life won’t wait so you too don’t have the time to wait and stay stuck in your past.

#7 Divorce Is Not The End Of Life

Divorces are never good but if it’s inevitable then people should understand that it’s not the end of their life. Just look at Ross, he had three divorces but still, there was no reason for him to be sad or restrict himself from falling in love.

It’s not just a joke that the showrunners wanted to create but they had a message hidden underneath to show that it’s ok even if your life isn’t going well and you have had to go through three divorces. Just go along and enjoy your life and you will find more opportunities to be happy.

#8 Be Kind To Everyone Or Life Hits You Back

Do you believe in Karma? Well, Friends did not actually describe or talk about it in detail but some of the scenes reflect the idea behind Karma. While Chandler was young he lifted Sussie Moss’ skirt in 4th Grade and we know what he had to go through after that!

Well, there are many such instances in the show. Did you notice any? Why don’t you mention a few more in the comments and let’s see if everyone else agrees to them!

#9 Learn To Express Your Feelings

Feelings are natural and are always beautiful. But only having feelings for someone is not enough, you have to speak it out to let the other one know. Ross always had a huge crush on Rachel but could never say it out loud. He had chances to express his feelings but he was shy to do so.

He wasted quite a few years and had to go through the torment while Rachel dated other boys. He may have avoided everything and could have been in a relationship much earlier. Even Rachel had the same problem, she always had to express her feelings for Ross on the perfect Wrong Time! Be it the wedding or when Ross already has a girl, Rachel always had to express her feelings in those odd hours. She could have said it earlier and things could have been much better.

#10 Clutch On To Your True Friends

True friends are difficult to find and if you have them then you should not ket them go forever. In this huge selfish world having a bunch of people whom you can trust always, with whom you can share everything and not be judged, is like a dream come true. So if you have such a group, stay with them forever.

Other people may come and go but they are the real gem in your life. Make a group of six and if you have the chance, create your own world of Friends. Stay together in nearby apartments, hang out together, share joy and sadness together, and more. Those times may not be permanent but would be the most beautiful times in your life.