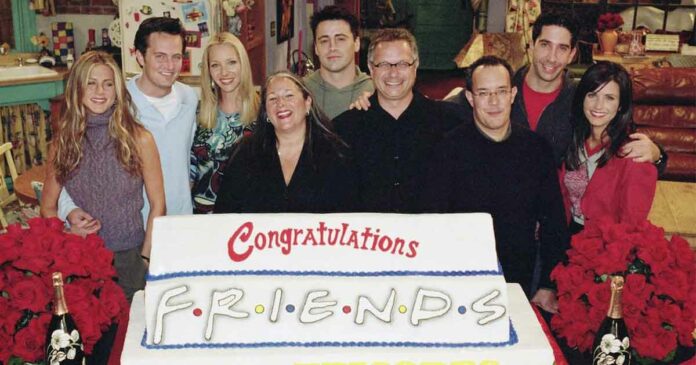 Did you realize it’s going to be 26 years since Friends came into existence? It feels like it was just yesterday that we watched them fight, fall in love, have fun, and more. It’s really hard to believe that all six of them, Ross, Rachel, Monica, Joey, Chandler, and Phoebe, are now old. Because in our imagination, they look the same as we saw them in the show.

Anyways, did you celebrate Friends Anniversary last year? In 2019, Friends celebrated the 25th Anniversary. It’s a really big milestone for any show to achieve and still be so successful. The six friends are still earning huge royalties for the reruns and other earning from the show. Even Warner Bros. is making good money from the show, can you imagine that Netflix alone paid $80m in 2019 to keep the show streaming in their platform. So just imagine the popularity of the show and the huge sum of money it’s earning even after 25 years.

On the 25th Anniversary of Friends, Fathom Events and Warner Bros celebrated it by taking 12 fan-favorite episodes of Friends to movie theaters across the U.S. It was an event spread over three nights: September 23, September 28, and October 2. Did you get the tickets to the event? If yes then don’t forget to share your experience and video in the comments.

For those who couldn’t make it to the theatres, just imagine how amazing the experience would be to have a hall full of Friends Fans and all are laughing hard at Chandler’s Jokes. Imagine everyone in there has the same energy and feel the same way for Friends as you do. Won’t you love to spend an evening like that?

The shows shown in theatres were was named “Friends 25th: The One With The Anniversary” and they wanted this to and experience where the fans get to reunite with their longtime BFFs – Rachel, Joey, Ross, Chandler, Monica, and Phoebe. The screening of the show on Bigger screen included reliving the most funniest moments. Also, they included a couple of exclusive interviews and never-before-seen content.

In theatres, they showed us the best of episodes that are the funniest. If you are wondering which episodes made it to the theatres then here’s your answer:
Sept. 23 episodes: Pilot – ReDo, The One With The Blackout, The One With The Birth, and The One Where Ross Finds Out.

All these celebrations mentioned above happened last year, but this year what can you expect? Friends fans were earlier excited about the Friends Reunion but unfortunately, the pandemic destroyed it all. The shoots of the reunion episode couldn’t be done and so we have to wait for now.

But do you think Warner Bros, lost hope and didn’t plan anything else after the reunion? Well, they know we can’t step out of our house this year and so they devised a plan to deliver us the true Friends experience right in our home! They want us to celebrate and party on this Friends Anniversary. This year we can expect a super special book we all will crave for.

A special cookbook that contains recipes from the show. Yes, you read it right. Earlier while watching the show, we knew there existed some food items but only in our favorite TV Show, Friends. This cookbook to be launched on 22nd September will have Ross’ Sandwich with the moist maker! It will also help you make chocolate chip cookies that Monica tried to prepare so hard but without much luck. More such recipes inspired by the show are about to reveal on this 26th anniversary of Friends.

Where can you buy the Cookbook from?

Well, turns out, the Cookbook is already available for preorder. Click to checkout on Amazon. And considering the fact that there are huge Friends Fans, we can expect it to go out of stock soon.

So book your cookbook and plan for a Friends Party soon! Even if you aren’t convinced yet then maybe reading more about the 26th Anniversary celebration might energize you.

Apart from that what are you planning to do on the 26th Anniversary of Friends this month? Well, let’s see how you would celebrate. So share your thoughts and plans