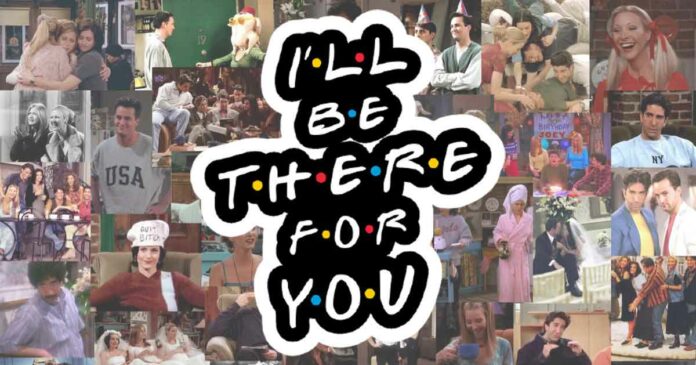 I’ll Be There For You! The lines seem so perfect for a series named Fiends. It explains the relationship between friends and makes us feel so happy. The song keeps on humming in our minds even after we are done watching the episodes for the day.

The song alone has a huge fanbase and became a sensation when it was released. Well, the story behind the song is quite interesting too. Even the shoots and the views of the cast members are noteworthy. So dive in and get to know about one of the most famous songs in history. And share it with your friends who love Friends!

#1
The Friends Theme song was supposed to be shot on a building rooftop originally, from where a section of Los Angeles was visible and could sort of qualify for New York. In this idea, the gang was supposed to have a little roof party, like the typical New York young folks.

#2
Shooting the scene at night on a chilly summer night was not at all easy for the cast. The water was heated, technically, but it was still pretty cold and the members stood shivering, calf-deep in that cold water. Things didn’t go as planned and the cast couldn’t pack up even after 4:00 AM in the morning.

#3
Half the intro video was planned and the remaining portions were spontaneous fun acts the cast did among themselves. While shooting the scenes, Mattew would crack some jokes considering their uncomfortable situation and all six of them would laugh like maniacs.

They dance moves, glances at the camera and some acts were all choreographed. But towards the end of the video, you can notice random acts like splashing water, giggling, getting completely drenched in water and all crazy things were all not in the script or plan. The cast was busy having fun and the camera was kept rolling, later they made some nice shots after editing. So in a way, we see the real side of the six friends in the music video.

#4
The video was shot at Burbank, California, on Warner Brothers’ Ranch. Some people have a misconception that the fountain is located in Central Park and consider the Cherry Hill Fountain as the real Friends fountain. But, turns out it’s not true!

The selected place was convenient for the recording team as they did not have to face the outside world and many other troubles. Also, they could easily use the orange couch as it was available in their sets nearby.

#6
Originally, Executive Producer of Friends, Kevin S. Bright did not imagine the video as we know it today. He wanted something similar to that of REM’s 1987 hit “It’s the End of the World As We Know It (And I Feel Fine).”

The song was initially offered to the rock bands, They Might Be Giants and REM. Eventually, the part went to the kitty of The Rembrandts as Kevin was a fan of their work.

#7
After the song was out, it performed so well that stayed at the top position of the Billboard Hot 100 Airplay chart for eight weeks at a stretch. It hit #1 on the US Mainstream Top 40 Billboard. It also took a weekly #1 spot in Scotland and Canada, and hit the charts in almost 10 countries!

It became so popular that it was frequently played on UK pop radio in 2004, it was the time when the Friends series finale was out. Considering it was just one minute long, it was quite unusual to get to so popular.

#8
Danny Wilde and Phil Solem (The Rembrandts) did not include the claps into the song. The iconic clapping in the song is actually done by the show’s producers! But The Rembrandts were supportive of the inclusion.

#9
The song got so popular that Danny Wilde and Phil Solem had to re-record it. The original theme is under one minute long, whereas it was later re-recorded as a three-minute pop song.

Phil Solemn, the lead singer once said, “Our record label said we had to finish the song and record it. There was no way to get out of it.”

#10
The recording by Danny and Phil was released in its pop version and was included it in their album LP, which was released in 1995, at the last moment. There was a fear that if they had released the song as a single, it would have pushed their album to the low.

Here’s the music video for you. Don’t forget to sing along!

#11
“You’ve got six people in a fountain at four in the morning who are about to embark on a journey,” said Matthew Perry. “And they just have no idea what is in store for them—other than it’s going to be fun, and maybe it will work.”

The words by Perry sound so humble now. They were on their journey without knowing their fate. But look at them now, look at the fame of the show, they have earned a lot from the sitcom Friends. No one ever imagined the success it might have earned but it did. The cast really did a great job and it wasn’t an easy task.

#12
Do you like Friends’ Title Song? As a fan, you must be loving it already. But the cast was not a fan of this song. They found the scenes were so unrelated and unnatural. So they didn’t much like the idea of the video. Anyways, they had to do it, so they did.

Jennifer in an interview with BBC once said, “No one was really a big fan of that theme song.” She and the fellow stars, Courtney Cox, Lisa Kudrow, Matt LeBlanc, Matthew Perry, and David Schwimmer “felt it was a little … I don’t know. Dancing in a pond? A fountain felt sort of odd.”