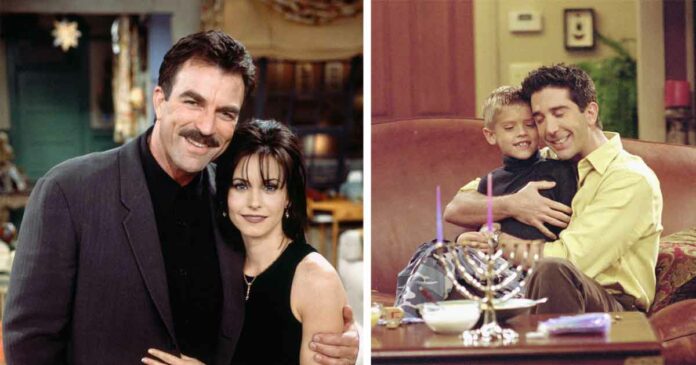 While observing the popular show FRIENDS, we notice that the show succeeds because of the close bond between the six characters and the storyline that revolves around them. Sure, they faced conflicts with one another but, they chose to rise above it and made their bond come out even stronger. However, the six friends in FRIENDS was a pretty close group and always stayed in focus. Besides them, there were some other characters who deserved more screen time in the show than they were given.

Oh my god!! Janice is one of the most entertaining and beloved characters of the show. She appeared multiple times a season and viewers were always delighted(or disgusted) to see her. Her ongoing and off going relationship with Chandler kept her intact throughout the show. There were hardly any moments when Janice felt like an unnecessary addition to any episode. It would have been good to have her around more often, as she was never short of being hysterical.

Frank was hilarious in his short time on the series. It would have been fun to watch him in a larger role or at least if we could see more of his story that would have been great. Even Phoebe would have enjoyed it, as he was her only family who wanted to be around. Phoebe and Frank’s relationship wasn’t like a typical brother-sister thing but their bond was even more intense than that. They helped each other in a way that most relatives won’t do but it meant a lot to show how much they cared for each other. In the series, we saw him follow his love life and gradually having a family of his own. But didn’t get to see that family grow and flourish. Even we didn’t get to see how Phoebe adjusted in Frank’s new family so we would have loved to more of Frank in FRIENDS.

David’s appearances are few, to be precise, he only gets to be in five episodes. He is probably the first man or the only man Phoebe was badly serious about. They had a bond that seemed like magic and would last really long. But quickly after his introduction, he leaves for Minsk thus leaving behind the spark they had. Meanwhile, Phoebe comes across many relationships and forgets about David completely. However, when out of nowhere David comes back, the strong chemistry rekindles. Unfortunately, his absence for so long makes it difficult for them to stay together. It would have been nice to see more of David and his weirdness. Phoebe and David would have been a nice couple if not for life, but at least for a while longer.

Charlie Wheeler came in as Ross’s colleague who later indulged in a relationship with Joey. She was the catalyst for an awkward love scenario among Ross, Rachel, Joey, and Charlie which was fun in itself. Since this character brought in huge fun and changes in everyone’s life, more of her in the show would not have hurt us at all. Her time in FRIENDS came to an abrupt end, in the episode “The One With Ross’s Grant”. While helping Ross receive a grant from her ex-boyfriend, Benjamin, she fell for those old lost feelings for him and that was the end of a really great character. Charlie had massive potential to grow as a character even if she continued to be a colleague. Just imagine the awkwardness when she comes across Ross at work and how Ross would have reacted to her. But sadly, the writers decided not to continue her in the show.

Will was Ross’s best friend from high school. They also made the “I hate Rachel” club just to hate Rachel. It would have been wonderful to carry forward their friendship and continued the awkward Hate Rachel Club. We surely know Ross would not be a part of it anymore but seeing him stuck between an old friend and the “love of his life” would have been fun. But that didn’t happen. Bradd just gave a guest appearance in the show and so we can’t expect more of him but anyways it would have been fun. However, he was hilarious in the thanksgiving episode.

Julie came into Ross’s life at the worst possible moment on the show. That time could have marked the beginning of Ross and Rachel’s romantic story. So a sad moment for the Ross-Rachel club out there. However, she was a cute and really understanding person. In fact, she was the first character who became friends with everybody in the group immediately except Rachel, for obvious reasons. Based on the amount of screen time she got, she had the potential to be a more rounded character in the show.

Carol and Susan have one of the most amazing and progressive relationships in the series. However, they disappeared in the last few seasons. They were not shown much as the main characters, but they were indeed an important part of Ross’s story. Being Ben’s Parents, the possible storylines were many, but they fell behind with no proper explanation.

At the beginning of Ross and Emily’s relationship, she was a happy and understanding woman which lead to their wedding in London. However, things changed completely after Ross said Rachel’s name at the altar. In the later episodes, her possessiveness and ultimatums for him became unreasonable. With every passing episode, Emily turned into the paranoid villain and Ross, the victim of his own mistake in the show. The closure she received did not feel right for her and so it would have been nice to see her a little more where she could gain back her respect on the show. The reason behind the rapid change in her character is also because, in real life, she became pregnant during the filming of the show and so couldn’t continue playing Emily, else things might have ended differently.

It would have been great to see Dina’s story because it turned out to be the most complicated than anyone else in the show. Moreover, she being the youngest, might have benefitted a lot from the group’s guidance towards a better life. And seeing the group acting like adults(which means being an idol to someone) would have been fun too. She was already in a place that was quite not good and seeing her come back and managing things for good would have been a nice experience. Since Joey was her brother, it would have been odd to see more of her getting indulged with the group.

Ben was a huge deal while Carol was pregnant and even after that. He was Ross’s first child and we know the first one always gets more attention in a family. But in the show, Ben disappears soon after Emma was born. We saw him bond with Ross and the group during the holiday celebrations but when Emma came in, everyone seemed to forget about him. At some point, it seemed unfair! They could have utilized his character differently. Having Ben around in the show could have been a growing experience for the FRIEND’s group. At least Ben deserved a few scenes with his cousin, Emma but sadly that didn’t happen. Don’t you agree that Ben should have got more screentime?

Chandler was quite afraid when he realized his liking for Kathy, Joey’s girlfriend. Although Chandler tries to shake his feelings for Kathy away, but the feeling found their way in again and again. Things got so intense that Kathy broke up with Joey to take things with Chandler to the next level. Even Joey gave them his blessings but sadly they didn’t last long. The unstability in her character was bad and at some point it feels like she could have been better. Also, Chandler became quite possessive and suspicious almost like Emily which later turned out to be true.

Gunther, who runs the famous Central Perk coffee shop was there throughout the series. He was never a part of the gang but he was surely the follower of their adventures. Gunther definitely deserved more active time on screen. Maybe getting involved with Rachel eve for quite a while would have been interesting.

Eddie was Chandler’s new roommate after Joey left him alone. His wicked temper and unstable mind made Chandler quite uncomfortable while they were roommates. However, keeping him for a longer period would have been amazing because he was hysterical. The craziness he brought in was unmatchable and we would not have been bored with his stupidity at all.

Richard was a family friend of the Gellers who later became Monica’s boyfriend. They both were in a serious relationship but eventually broke up mutually. He definitely was a character that could have had a larger story than just being Monica’s partner. Moreover, his character was quite intriguing. Though the relationship between Richard and Monica ended, he could have been a powerful addition to the show if allowed to continue.

Ursula, the twin sister of Phoebe appeared several times until the eighth season. She balanced Phoebe’s whimsy persona by having an uncaring attitude. At times, her actions were quite surprising and even more weird than Phoebe’s. Ursula was a fun character to keep around, especially when she was treated as a villain. It might have been fun to show more of her and at several other occassions.

These are the 15 characters that we feel should have got a little more screen time than what they received. If you have someone else in your mind then feel free to share the name in the comment section. Also, don’t forget to mention how you wanted to see them continue. Let your imagination fly high!