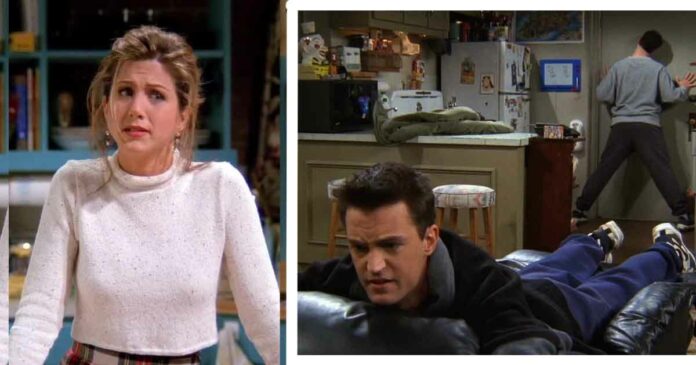 Friends TV Show is absolutely one of the most hilarious shows I have ever seen. I am a fiction lover. I love movies like Harry Potter and shows like The Vampire Diaries. Friends was the first comedy-based show I started watching. Ever since I started watching this show, I haven’t been able to stop myself from watching it over and over again. Now I am at a place where one episode a day keeps me stress-free the whole day!

This show is kind of a stress buster not just for me but for many. Well, the prime reason for the huge success of this show is its comedy. Oh! How we have laughed our hearts out during those sarcastic jokes cracked by Chandler. But, can we be sure that we know each and every joke cracked by him or the rest of the cast? Of course, we don’t remember every one of them. But I am questioning if you understood them all while watching? There might be many jokes which we didn’t even notice while watching the series. So now, let’s check out some of the jokes which we might have not understood to their fullest.

Matthew Perry and his lost toe.

But did you know that this scene was actually used by the cast and directors to make fun of Matthew? In real life, Matthew lost his toe in an accident when he was a kid.

The one where we saw other friends sitting on the Central Perk couch.

In season three, there was an episode where Ross reveals to Rachel his fantasy, ‘The Princess Leia one’. There is one scene where they all go to the coffee house as usual. But, to their surprise, they find other people sitting on their regular hangout couch. I bet many of you didn’t realize who those people were. They were the writers of the show. Crazy, I KNOW!

The one with ‘The Rachel haircut’.

Many of us might have tried the Rachel Green haircut after watching the show. Jennifer Aniston rocked that look! In the episode “The one with the Lesbian wedding” Rachel’s mother shares with her how she is thinking of divorcing her father and would like to lead her life like Rachel. To this, she reacted by saying “If she had to be more like me, why couldn’t she just copy my hairstyle or something?” Now, this was a joke keeping in mind the trend of ‘the Rachel’ haircut.

The one with Professor Geller’s teaching method.

In an episode, Ross is seen giving a lecture about dinosaurs. In this episode, if you look at the board, you will notice some funny diagram-based stuff written there. My best guess is that it said Dr. Geller gets bitten by a mosquito and then has a dream about how he visualizes using DNA from Mosquito to clone T-REX.

The one where Joey’s name appears in the crossword.

We all know how Rachel loves to solve crossword puzzles. Once while she was doing her puzzle, she realized that the answer to one of the blocks was Joey Tribbiani. Then Joey takes the magazine from her and reads- “Three down, Days of our Lives star blank Tribbiani. That’s me!! I’m Blank!!” Now, if you all know, Matt’s last name is similar to that, Matt ‘LeBlanc’.

Remember Rachel’s baby shower to which Monica and Phoebe forgot to invite Rachel’s mother? In this episode, there is a scene where Rachel and her mother look back in time. They talk about Rachel’s caretaker who taught Rachel a little bit of Spanish. Rachel here says a Spanish sentence – “Tu Madre es loca!”. The meaning of this sentence is “My mother is crazy!” Well placed Rachel!

The one where Rachel has a blind date with the stoned guy.

In season nine when Rachel is done with her whole pregnancy period, she asks Phoebe to set her up with someone. So, Phoebe sets her up with a friend of hers. During that scene when Rachel asks him what happened to his restaurant. He reacts saying that he lost it to abuse by substances. Now, if you are watching the series for the third or fourth time, you might have noticed, this guy is the same guy who comes to Monica’s place to test her cookery skills. This was to determine if she was eligible to become the head Chef of his restaurant or not.

The one with the poker game.

Going back in time, we know how terrible the girls were at poker. There is this episode from Season 1 where they all play poker and the girls tend to lose every time. In this episode, there is a scene where Rachel leaves the game unsettled saying she has to fax some resumes. Then the guys react saying, “Rach, we got to settle”. To this Rachel asks what is there to settle. Now Chandler being Chandler, cracked a sarcastic joke saying. “The James town of Virginia”. You see King George is giving us the land, …..
Many of you might now know this but the James Colony of Virginia was the first place where the British established their colony. According to William Kelso, James Town is where the British empire began.

The one where Phoebe gives Monica a haircut.

In season 2, Phoebe gives a haircut to Joey and Chandler which turns out great. Seeing this, Monica asks Phoebe to give her a hair cut like Demi Moore. But Phoebe misunderstands it to be Dudley Moore. After this terrible misunderstanding, when they all were sitting at the table, Ross comments saying, “Well, I like it, I do. I think it’s a 10”. To this, they all start laughing. You see, here, Ross was referring to Dudely Moore’s movie “10”.

The one where Chandler sets up Rachel for a date with his colleague.

We all know what a charming woman Rachel Green is. I mean can a guy ever refuse to go on a date after knowing Rachel is seeking a fling! When Chandler ask his colleagues if they would like to go on date with Rachel, without thinking twice, they said yes. Later, when Rachel meets Chandler, he explains to her how guys are dying to go on a date with her. To this, Rachel responds, “Will I like any of these guys?”. Chandler again cracks a joke saying, “Guys are signing over. Therefore not one – K’s to me”. This joke, of course, even I did not get. So, apparently, 401(k) is a retirement plan offered to the employee by the employer.

The one with Monica bang.

I think many of you have figured out which scene I am talking about with the title. I am talking about the scene where Monica and Rachel were babysitting Ben. While playing with Ben, Monica bangs his head on a wall. After this, Monica and Rachel both try to create a scenario to make Ben think that banging their heads to a wall is perhaps normal. After doing this, when Monica asks Rachel if she was ok, she comments saying, “Yeah. You know. If it is not a headboard, it is just not worth it.” The meaning of this joke is that banging your head is not worth it unless it is against a headboard while doing it (I hope you understand doing what).

The one with Phoebe’s date with the health inspector.

In season 5 episode 7, there is a scene where Phoebe and Larry (the health inspector) go on a dinner date. In this scene we see Phoebe throwing a pinch of salt over her left shoulder. I think many of us know the reason behind this. There is a belief that we should throw salt over our left shoulder to avoid bad luck and we all know how Phoebe loves to believe in such stuff.

The one with Phoebe’s déjà vu.

I mean we all know that Phoebe can do the weirdest stuff. Once while they are were all hanging out at Monica’s, Monica finally builds up the courage to tell them that she is breaking up with Allen. When she starts to talk, as always Phoebe interrupts and says “Wait, I am getting a déjà vu. No, I am not.” Now, if you see the confusion between yes and no is a typical ‘déjà vu”.

The one with Captain Joey Tribbiani. 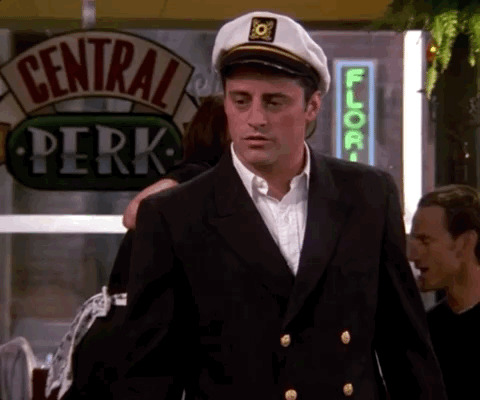 In season 6, the season where Chandler and Monica get engaged! Rachel and Phoebe are spotted discussing how happy they are for Chandler and Monica if you know what I mean. Joey comes in the coffee house and askes them if they have seen Chandler. To this Rachel reacts saying “Wh—no, but you know who did stop in here looking for you, Tennlie!” well, Captain and Tennile were a famous duo, American singing artist during the 70s.

The one with the football game on thanksgiving.

In season 3 episode 9 we got to see how good the cast was in football. While they were about to play the game, Joey suggested that they should pick captains. Chandler responded to this by saying “And then Tennille”. Now we know who invented the joke! In fact, there have been many such scenes where we can see the other friends following the footsteps of Chandler Bing!