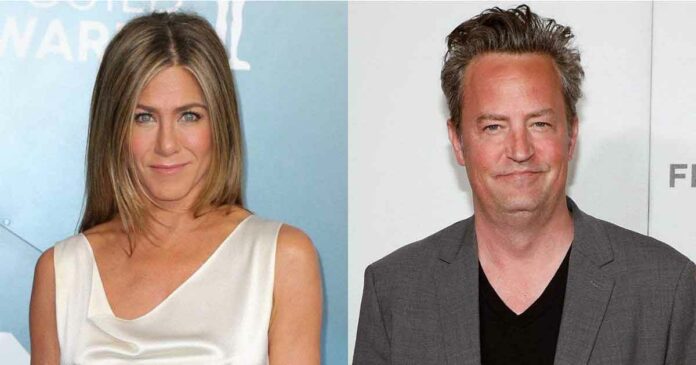 FRIENDS duos Joey-Chandler, Monica-Rachel get lots of credit for the best portrayals of friendship. But Rachel and Chandler are sneaky contenders too but they are the most underrated. They seem to be two of the most separated characters on the show. However, a special thing about the duo was the fact that they had similar likings at times and it allowed them for a different kind of friendship.

Yes, Chandler and Rachel had lighter moments like setting each other up on dates, the cheesecake, etc, but they actually were the best while dealing with serious issues. When they were individually devastated about their crushes, they somehow ended up leaning on each other. The friendship wasn’t showcased as often once Monica and Chandler got together, but when the series did showcase them, it was really done well.

To prove it, here are the moments that proved just how Chandler and Rachel’s friendship was underrated in the show. Let’s check out:

1. The One When They Stole Cheesecake

Throughout the FRIENDS series, Rachel and Chandler’s love for cheesecake is widely known. They loved cheesecake so much that they’re even willing to steal it from their neighbors. Chandler and Rachel are even up for fighting over their beloved cheesecake. Later, they were seen shamelessly eating it off the floor.

2. The One When Chandler Misses Joey And Rachel Comforted Him

It is still traumatizing to remember the rift between Chandler and Joey from Season 2. However, when Joey found success and left his bracelet buddy and roommate behind, Rachel was there to pick up the pieces.

3. The One When Rachel Helped Chandler Become James Bond

While choosing the outfit for Chandler that Monica would love and one that would fit in his wedding, Rachel helps Chandler to get a James Bond Suit, but it didn’t fit. Chandler eventually married Monica in another suit. Rachel was a good enough friend who didn’t tell him that the suit once belonged to Diane Keaton. However small, the moment of friendship they had during these scenes was good to watch.

4. The One Where Rachel’s Boss Locks Chandler In Her Cabin

Chandler goes to break up with Joanna, Rachel’s boss but ended up being handcuffed to the chair in her office. Rachel uncuffed him as they knew Joanna was stuck with her boss but later Rachel realized that Joanna would know Rachel was in her office and so she tried to put back those handcuffs. Their bargaining to get what they want was hilarious and we surely enjoyed it.

5. The One When They Can Rely On Each Other

Fans learned already that Rachel struggles with commitment from the very beginning of the series. The audience learns this about Chandler as well. Up until season five, when Chandler and Monica started dating both Chandler and Rachel had a hard time maintaining relationships. But, they always had each other to rely on. Do you remember those moments?

6. The One When Chandler Thinks Rachel Is A Catch

One of the sweetest moments between Chandler and Rachel is when Chandler is consoling Rachel about a relationship that didn’t work out. He tells her she’s a catch, hugs her, and invites her to a hockey game. It is a rather sweet gesture and won our hearts.

7. The One When They Had A Treat To Self Day

Viewers know how much Rachel and Chandler love pampering themselves. They both head to the nail salon together and there they both enjoyed getting a manicure. It makes sense that they would enjoy doing such self-pampering kind of things together as they had plenty in common.

8. The One When They Hooked Up In A Dream

A very bored and still engaged Rachel meets Chandler in “The One With The Flashback” and then they had a steamy daydream about it. It shows that they totally should have been a thing. Also, how did Rachel forget meeting and kissing him at a college party? Seems like they were more than just friends!

9. The One When Rachel Helps Chandler To Get Over His Relationship

There’s surely no shortage of love between the duo even if they didn’t get their own storylines very often. For example, Rachel helped Chandler through the whole process of getting over his relationship with Kathy. However, Chandler always works hard to make Rachel laugh and make her feel better whenever she’s feeling down.

10. The One When They Said Goodbye

At the end of season 10, fans get a glimpse at how much Chandler and Rachel mean to one another when they say their goodbyes. Their strong bond definitely shows their rock-solid friendship.

11. The One When They Were Honest With Each Other

The best part of Chandler and Rachel’s friendship is how genuine it feels. Rachel made it a point to call Chandler out in a season five episode and let him know that how uncomfortable she feels about him kissing all of the girls whenever he leaves a room. It shows just how comfortable they really are with one another.

12. The One When They Understand Each Other

Chandler and Rachel can relate to one another on multiple levels. Not just the struggle with managing their romantic relationships, but also managing their parental relationships. Chandler was the one who consulted and connected her best when she was dealing with her Parent’s divorce. They surely understand each other in more ways than one which is what makes them amazing friends.

13. The One When Chandler Looks Out For Rachel

Chandler has looked out for Rachel from the beginning of the show. Chandler encourages Rachel to take the plunge in season three of the show, quit her job, and send out resumes for a job that she actually wants to do. He convinces Rachel that she won’t ever feel motivated enough if she doesn’t quit her current job first. It shows that Chandler has always wanted what’s best for Rachel.

14. The One When Rachel Stops Chandler’s Smoking Habit

In season one, Chandler picks up an old habit of smoking. While everybody was calling out on him, Rachel came with the idea to call Alan, Monica’s then-boyfriend, who everybody adores, and made Chandler quit smoking. It implies that how much Rachel cared about him.

15. The One When Rachel Was Leaving

In the episode, when Rachel came to say goodbye to everyone before leaving for Paris, she wants to say to Chandler how much she will miss his stupid jokes and most of all him. But, Chandler stopped her and said “let’s not say anything else” and hugged him. It shows their true bond which doesn’t require words to express.