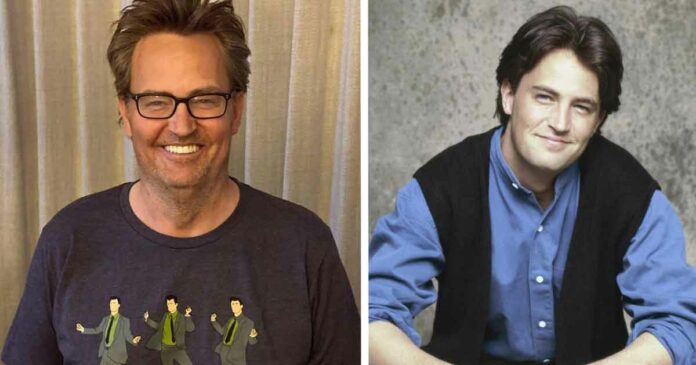 Every FRIENDS fan has their favourite character because each one of them brings six different traits to the table that makes the show as hilarious as it is. Monica is insanely organized while Rachel leaves her fiancé at the altar and finds out what it’s like to live in a world without daddy’s money. Phoebe is all over the place with her crazy stories and Ross is a huge dinosaur nerd. Joey can pick up any lady just by asking how they’re doin’ and can drink a whole gallon of milk in ten seconds.

While all of these characters are hysterical as they can be, no one can quite replace the one and only Chandler Bing. Below is the list of 15 reasons why Chandler Bing is Our Favorite. Let’s check out:

1. His Love For Bubble Bath

Baths full of bubbles, essential oils, warm water, calming music, who wouldn’t like it? When Monica first asked him to try it, he was not that much into it. But after he tries it for himself, he couldn’t get back. The expression on Chandler’s face was so peaceful and relaxed that many of us were drawing our own bathrobes. However, Chandler needs to learn to keep the door closed so that nobody can interrupt him.

2. His Response When Asked For Advice

When Rachel rejected Joey’s proposal, she was afraid that they never are back to normal again. She asked for a bit of advice from Chandler, who lets her know that he is not really good with advice instead, could he interest her in a sarcastic comment? Anybody who isn’t good at giving advice can relate to Chandler at this moment.

3. His Friendship With Joey

This was one of the most memorable moments between Chandler and Joey. When Chandler tells Joey that he kissed Kathy, he was furious with him. Chandler begs for forgiveness, but he did not get it until he did some thinking in a box made by Joey himself. Later, he not only forgives Chandler but also encourages him to go after Kathy. That is the best part when they forget the past and move on.

4. Found A Job He Cared About

Chandler hated his job in the show and always complained about it. He was just stuck there because of the good pay he received by the end of every month. But later in the series, he finally quits his job and joins a job in the advertising business. Chandler may have started from scratch but with hard work and dedication, he became permanent and rocked it hard. Many of us would love to experience such a moment., so now’s the time to take that leap!

It took nearly 10 years for Chandler to finally find his love in Monica. In the earlier seasons, he was desperate for love and attention, but soon after he feel for Monica, he started growing into a mature person. They respected and supported each other, made long-distance work, sorted their problems together, and found an alternative to have babies. Even after knowing they have to part ways, Chandler supported her to take up the job in Javu.

Chandler loved Monica more than anything else in this world and was ready to do anything to make her happy. Earlier, he was afraid of commitment, but with Monica, he became a great husband. He proves he’s a gentleman at many adverse events like the one when a beautiful woman from work throws herself on him and he daringly says no. Also, his little but quite emotional speech convinced Erica to give them her baby, and all that just for Monica.

Chandler is the most amazing and relatable character. He accepted his friends and girlfriend for who they were. It was his insecurities that held him up and made him think practically in the show. But eventually, we see, he did not allow his insecurities to hold him back while he fought against them bravely. He had so much courage to quit his high-paying job and make a new start at the age of 30. Also, he fought with the fear of commitment by marrying first in the lot.

9. His Healthy Lies For Healthy Relationships

He knew how hard it is to deal with a few forced discussions with your girlfriend or spouse but he did it. I can be sure that every man can relate to this. How timid he might seem, but his wit allowed him to make worse situations favourable.

10. His Laziness To Workout

If he could have a superpower, it would be the ability to watch people work out and take all their health benefits just by watching it. Anyone here, who can relate? Then tell us if you have done something just like Chandler. Did you too take the gym subscription and never showed up?

11. His Adorable, Awkward, and Non-Photogenic Smile

Some people are good-looking and get amazing pictures, while Chandler is one of them who screw up every picture by posing with his weird smile. Poor Chandler, he couldn’t even be in the real photo when needed.

“Rachel: [to her friends]– I just feel like I need one last fling, get it out of my system, I just want to have meaningless sex with the next guy I see. Chandler: [drops the pool ball] Excuse me, I seem to have dropped my ball. Rachel: Yeah, so? Chandler: [picks it up] And now I’ve picked it up again.”

If this is flirting, then I’m sure many guys might get lucky every night! Poor Chandler! We feel for you.

13. His Miserable Urge To Find Love

At one point in his life, his desperation for love is the epitome of every single guy who is in search of love. Well, it is rather sweet that he seeked true love considering he dumped his dates for pitty reasons.

You must have heard several times Chandler saying, “That’s me. I am weird and sensitive”. It is often pointed out that to cover his awkwardness, he used sarcasm, which tells us that he is self-conscious. Well, we all have that at some point in life.

15. He Has The Last Line Of The Entire Show

Chandler Bing is like the glue that holds the “Friends” together. In times of awkwardness, he helps everyone with a joke to lighten the situation. When everyone is sad and leaving each other by the end of the show, he knows how to break the silence with a sarcastic comment. And the best part, it was not even in the scripts!

I guess these reasons are enough to prove our love for Chandler. He is surely the best and there can never be a character like him when it comes to Sarcasm. So keep watching FRIENDS and learn more from Chandler.