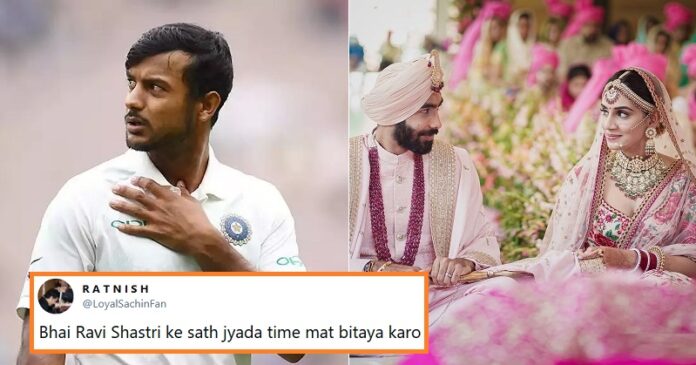 Jasprit Bumrah, an Indian pacer announced his wedding to star sports presenter and anchor Sanjana Ganesan on Monday after days of speculation on social media. The picture of their wedding immediately went viral. However, it was a blunder by Mayank Agarwal, an Indian batsman that caught the attention of netizens. After his mistake was pointed out by some Twitteratti, the batsman had to delete the tweet.

Ever since the information about it was leaked on social media, the wedding of Jasprit Bumrah has been the talk of the town. The duo did their very best to keep it a private ceremony and because of that only a few family members were allowed to attend the ceremony.

The couple uploaded two pictures of the ceremony on Monday afternoon along with a caption from their individual Twitter accounts. The caption read, “Love if it finds you worthy, directs your course.” Steered by love, we have begun a new journey together. Today is one of the happiest days of our lives and we feel blessed to be able to share the news of our wedding and our joy with you. Jasprit & Sanjana.”

“Love, if it finds you worthy, directs your course.”

Steered by love, we have begun a new journey together. Today is one of the happiest days of our lives and we feel blessed to be able to share the news of our wedding and our joy with you.

Since Bumrah’s family are Punjabis by origin who are settled in Gujarat, the two were seen in a Punjabi-style wedding in the picture. Fans started showering them with love and blessing as soon as the picture was out. Many of the cricketers along with sports journalists and BCCI and ICC also wished the newlywed couple. However, Mayank Agarwal’s mistake takes the cake.

The tweet was noticed by many cricket lovers on Twitter. Eventually, the cricketer saw his mistake and deleted it. It is just hysterical to think if Bangar would have read the tweet before it was deleted. However, later Mayak rectifies his mistake and tagged Sanjana Ganesan while wishing them on Social Media.

Congratulations @Jaspritbumrah93 @SanjanaGanesan Wishing you happiness and health together 🤗❤️

Even though Mayank hardly took any time to delete the tweet, it is not easy to escape the bat eyes of social media users. Fans were too quick to spot the mistake and trolled Mayak for the same. Here are some of the funniest reactions on Twitter after his mistake:

Only elite people know this is 2nd tweet from Mayank 🤣😜