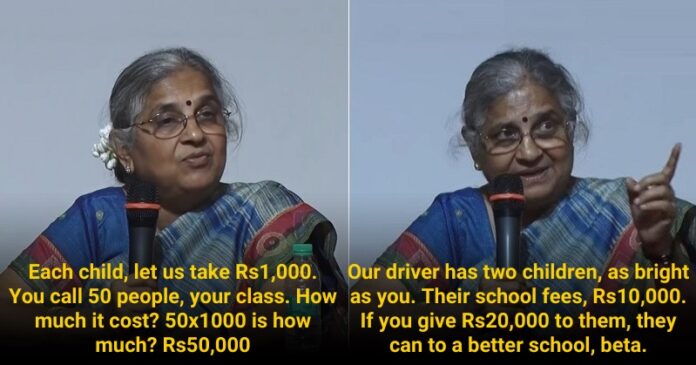 Sudha Murty, Infosys chairperson, teacher, and the author has always preached about the virtues of equality and simplicity. She is the person who has not just practiced it but also raised her children with the same ideals.

She visited the Jamnabai Narsee Campus in Mumbai in 2017 for an interaction session with the students. There she gave insightful responses to their questions. And while doing that she gave a piece of insightful advice which was also a shining example of parenting done right.

She gave the example of her own son. When he was young, he wanted to have a birthday party in a five-star hotel. However, she did not give him permission for it.

She made her son understand the value of money. She said that the amount he would spend on a luxurious party could help to provide food and better education to a lot of impoverished children including the children of her own driver.

She repeated the same discussion when her children when they turned into teenagers. She taught them the importance of hard work, equality, and hard-earned money.

Her son always remembered her teachings when he was studying at Cornell and told her that he was proud of the way she had raised him.

Because he understood the importance of being sensitive and sharing wealth to the needs of those less fortunate than you, he even contributed a nominal amount that he won in a scholarship with the soldiers who sacrificed their lives in the parliament attack in 2001.

Here is the complete session which was held in Jamnabai Narsee School: