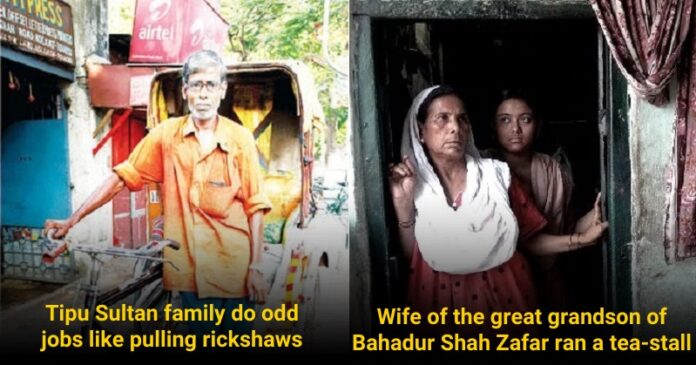 India was a land of several kingdoms before independence, be it big or small. These kingdoms were immensely wealthy ruled by Rajas even during the British rule. However, their power, fame, and wealth gradually withered away. And later, descendants of royal families lived a life of commons. Let’s check out royal Indian families who were wealthy earlier and are now struggling to make ends meet:

1. Descendants Of Osman Ali Khan: The Last Nizam Of Hyderabad

In 2012, Nizam was ranked the 6th richest person in the world with a wealth of $236 billion. He had 18 sons and 16 daughters. In 1967, Prince Mukarram Jah has crowned the eighth Nizam of Hyderabad following the death of Mir Osman Ali Khan. Reportedly, around 120 descendants of the last Nizam are now fighting a legal battle. They are fighting to get their due share in 36 million pounds which were deposited seven decades ago in London.

The Raja of Tigiria was once known as a playboy prince of colonial India. He used to live in a palace and traveled by an elephant when he wasn’t racing one of his 25 vintage cars. He lost his state’s tax revenues when his kingdom was merged with the Indian republic in 1947 and was given an annual income of Rs.11,200 by the state. He was forced to sell his palace because of the shortage of funds, which has now been turned into a girls’ high school.

Later, he lost his annual income when the Indira Gandhi government took out the last remaining royal privileges. He was left to the mercy of the local villagers and after a while, he passed away in November 2015. He lived away from his family in an impoverished state in a mud hut. He is survived by Rasmanajari Devi, his wife who is also an MLA, and three sons.

3. Sultana Begum: Wife Of The Great-Grandson Of Bahadur Shah Zafar

Today, Sultana Begum, wife of the great-grandson of Bahadur Shah Zafar, late Prince Mirza Bedar Bukht live in a 2-room house in Kolkata. Reportedly, until the government granted her a monthly pension of Rs. 6000, she used to run a tea-stall. Sultana has one son and four daughters and all of whom belong to the lower middle class.

4. Descendants Of The Travancore Royal Family

After Hyderabad, Travancore was the second richest kingdom in India when it acceded to the Indian republic after independence. In 1991, Sree Chithira Thirunal Balarama Varma, the elder brother of Utharadom Tirunal Marthanda Varma and the last princely ruler of Travancore passed away. After that, Utharadom Tirunal Marthanda Varma became the head of the royal family and died in 2018.

He was the Chairman of the trust running the famous Sree Padmanabhaswamy Temple. In 2011, it shot to fame when jewelry worth Rs. 90,000 crores were discovered in its vault. At that time, Varma had said, “It is the wealth of Lord Padmanabha and we never ever felt any interest in it. It should be preserved as God’s wealth in future also.”

5. Descendants Of Tipu Sultan: The ‘Tiger Of Mysore’

The British shifted the family of Tipu Sultan to Kolkata after his demise and made sure they did not return to the south. When the East India Company took ownership of the jewelry of Fatima Begum, Tipu Sultan’s eldest daughter, it needed six bullocks to carry them. Today, her descendants live in Kolkata in hutments.

Sahebzada Syed Mansoor Ali married Sahebzadi Raheemunnisa, Tipu’s great-granddaughter. He has been campaigning to get some financial help to Tipu’s family members. Most of them are engaged in odd jobs like electricians, tailors, repairing cycles, pulling rickshaws, etc.

Dr. Kaukab Quder Meerza, the great-grandson of Nawab Wajid Ali Shah used to live in a 1-story building in the bylanes of Kolkata. In September 2020, he passed away after contracting COVID-19. Meerza, a former professor with the Aligarh Muslim University is survived by his wife, Mamlikat Badr. Mamlikat Badr is from Lucknow’s renowned Shia cleric family and has six children. Meerza’s family are direct descendants of the son of Wajid Ali Shah and his wife Begum Hazrat Mahal, Birjis Quder.