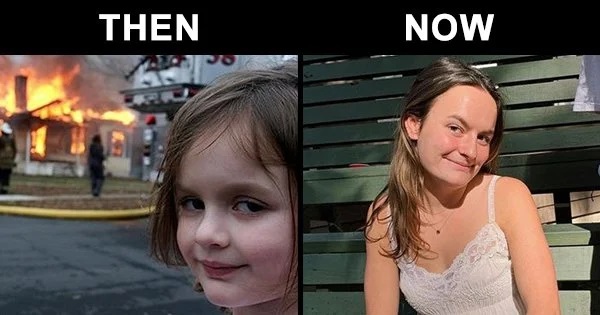 The internet is full of memes nowadays featuring real-life animals and people from all around the world. However, have you ever thought about how they became meme heroes or legends and what they look like now? Well, if you have, we have got your back. Here is the list of 21 meme legends and a sneak peek at what are they doing now. Let’s check out:

In 2007, this meme came into existence after Laney Griner posted a photo of her son, Sam. At that time, he was trying to eat sand, on Flickr. The photo became famous earlier as an “I Hate Sandcastles” meme. Later, the ‘Success Kid meme’ came into existence. The photo has been featured since then in Xbox screensavers, various ads, and whatnot. He now lives with his parents and is 13 years old.

In late September 2012, Tardar Sauce as Grumpy Cat. She went viral for her permanently grumpy expression. It has resulted from feline and underbite dwarfism. Unfortunately, she passed away at the age of May 2019.

In 2013, this meme became popular after Kabosu’s human friend, Shiba Inu posted a picture on her blog with a perplexed expression of her. She is now 15 years old and an Instagram star.

In 2004, this iconic picture was captured by Dave Roth, Zoe Roth’s father when she was observing firefighters controlling the fire a few blocks away from their house. Dave entered this photo into a competition in 2007 and surprisingly, won it. She now lives with her family away from the internet.

In 2013, Chloe went viral after a video titled “Lily’s Disneyland Surprise… AGAIN” was posted by YouTuber KAftC. Chloe was reacting in this video to a surprise trip to Disneyland’s news on her way to school. After hearing the news, Chloe made a straight face, not sure how to react. And that’s how this meme was born. Now, she has her own Instagram account with about 582k followers.

In 2013, the GIF was shot when Drew was a video producer at a popular gaming website, the Gaming Bomb. Drew watched his editor-in-chief play Starbound during one of the gaming sessions that is a two-dimensional action-adventure game. Drew’s hilarious reaction became a meme when his editor said “I’ve been doing some farming with my h*e”. Drew left Giant Bomb to explore the world after becoming famous and to make travel documentaries through the lens of gaming.

In 2011, the photo of András Arató, a senior stock photography model went viral with a facial expression that seems to indicate suppressed pain. Well, it is still famous like before. Arató became the advertising face in 2019 for Coca-Cola in Hungary and starred in the Hungarian edition of Masked Singer in 2020. Arató currently lives with his wife Gabriella and his son in Budapest.

In 2016, the funny facial expressions of Kayode Ewumi became a meme. When he made this funny expression, he was part of a mini-documentary series “Hood Documentary”. In 2016, Ewumi’s comic talents eventually caught the attention of BBC and it took the viral show to a more mainstream audience.

In 2012, this photo turned into a meme after Ian Davies uploaded a yearbook photo of his friend Kyle Craven with the caption “Takes driving test .?.?. gets first DUI”. Supposedly, Kyle rubbed his face with a sweater to make it red before taking the photo and gave an unpleasant smile which ultimately became a viral meme. This meme is generally used to describe tragic events, unlucky, and embarrassing. Now, works as a manager at his father’s commercial construction company and lives in his hometown with his wife and dog.

In 2012, this extremely handsome photogenic guy, Zeddie Little was clicked while running in the Cooper River Bridge Run. Smith gained immense popularity after his photo was posted on social media by Will King. He currently lives in New York City.

This meme is a screenshot of the YouTube web series “Thru The Lens” from a 2014 episode, which is a confused photo of NBA basketball player Nick Young. He makes this perplexed facial expression in the series when his mother claimed that in his younger days he was “a clown”. In 2017, Young signed with the Golden State Warriors where he became more of a role player on a stacked team.

12. Michael McGee: Trying To Hold A Fart Next To A Cute Girl In Class

In 2014, this meme came into existence. After Reddit user aaduk_ala submitted the photograph to the /r/funny subreddit, the picture went viral and titled it “Trying to hold a fart next to a cute girl in class”. McGee was in high school two years ago where he trained at a broadcast media academy.

If you don’t know, this woman from the ‘First-World Problems’ meme is now an award-winning Italian model and actress.

This meme of Mia Talerico came into existence from a scene from the Disney Channel show “Good Luck Charlie.” The GIF and picture are mostly used as an expression for “I don’t know”. Mia has over 1.4 million followers and is quite popular on Instagram.

In 2012, this meme was born when YouTuber Laina Morris posted a video while performing a parody version of Justin Bieber’s ‘Boyfriend’ with personalized lyrics which was hilarious. Morris had to deal with serious privacy issues after gaining immense popularity. She finally quit YouTube in 2019 to stay away from the limelight.

16. Giorgio Tsoukalos: Aliens Are To Blame For Everything

Giorgio is a Swiss-born writer, producer, TV presenter, and ufologist. He was popularly known for his amazing appearances on the TV series “Ancient Aliens”. He is still part of the show.

In March 2012, the “Ermahgerd” meme emerged as a post titled “Just a book owner’s smile”. When she and her friends were playing dress-up, then this picture was captured. Now, she is working in financial services.

In 2013, this famous GIF/photo came into existence after the 3rd season premiere of “Key and Peele”. This meme was captured from the episode where Jordan Peele nervously sweats when his girlfriend asks him about his internet habits. he has gained immense popularity since then.

In January 2011, this photo was first posted on Reddit which is from an album cover named “Ma Gangsta”. There is a guy in this picture named Blake Boston, also known as “Weezy B”. He is now married and the father of two boys.

20. Igor Nazarov: A SchoolBoy In A Swamp

In 2016, a 16-year-old Russian schoolboy, Igor Nazarov went viral after he was part of a photoshoot in which he was seen behind a desk wearing a suit in the middle of a swamp. He was invited to Kyrgyzstan in 2016 by the country’s Culture Ministry.