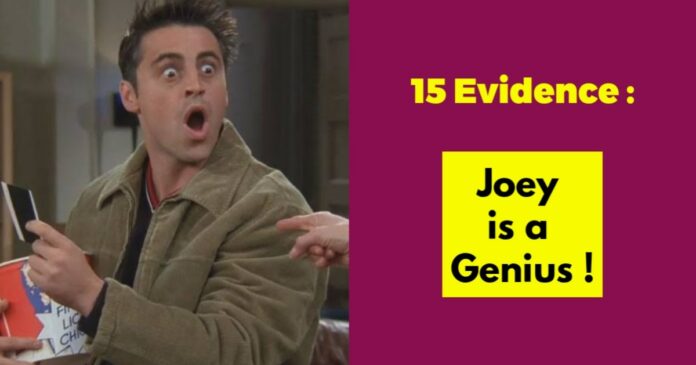 Joey in Friends is shown as a womaniser with a charming personality which is instantly loved by the ladies. He is handsome, no doubt, and also has a soft heart for his friends. But most of the time, he is shown to be dumb.

He is shown as someone who isn’t so bright and takes time to comprehend even the simplest puns. But, was he really that dumb as shown in the series?

#1 When Joey Advises Chandler Against Breaking A Family

Joey: “They have a kid together. They’re like a family. If there’s a chance they can make that work…I wouldn’t want to be the guy who stood in the way.”

When Chandler finds out that Janice was cheating on him with her ex-husband, he turned to Joey for some advice. And Joey said the wisest thing any man could have said.

The advice he gave is not only valid for him but looks valid for any relationship going through the same fate. This dialogue Shows us that Joey is a good guy underneath that Joey charm he uses on every girl, just needs the right moment and right person to hit that.

Joey: “You’re gonna have to pee on it.”
Joey: “Don’t blame me. I saw it on the Discovery Channel.”

In the episode ‘The One With The Jellyfish’: when Monica is in pain after getting stung by a Jellyfish, Joey comes to her rescue by giving out his knowledge from Discovery Channel.

Yes, Joey goes beyond Baywatch and adult movies to watch the Discovery Channel. And his knowledge helped the day when it was needed the most. He may act dumb at times, but he is smart when required, and so he can be called a genius. After all, a friend in need is a friend indeed!

Joey: “Rach, the big question is, does he like you? Because if he doesn’t like you, this is all a moo point.”
Rachel: “A ‘moo’ point? Yeah.”
Joey: “It’s like a cow’s opinion. It just doesn’t matter. It’s moo.”
Rachel: “Have I been living with him for too long, or did that make sense?”

Remember the episode where Chandler doesn’t like dogs? Still, people can’t get over it, how he could hate dogs so much! Anyways, in the same episode, confused Rachel asks the gang how long was she supposed to wait before making a move on a guy who was recently dumped. In her case, it was Tag she was referring to.

To her question, Joey gave an epic reply stating she needs to check if Tag was attracted to her as well. If not, then making a move was like a cow’s opinion, which is nothing!

Finally, Joey showed his wittiness by framing a phrase and justifying it too!

#4 Joey’s Opinion On Stereotyping – His Statement Is So Appropriate!

Joey: “You know what? Make fun all you want. This is a great bag.”
“Just because you don’t understand something doesn’t make it wrong.”

This statement by Joey is so appropriate that it’s a slap on the face for many people who prefer stereotyping and demeaning people once they fail to understand them. The dialogue is from the episode where Rachel gave Joey a Man’s Purse, as he prefers to calls it.

His opinion shows us how open-minded and modern he is because people say what they believe. Joe’s dialogue has given words to many who face oppression because of the demeaning society. Good job, Joey!

Joey: “All right, well, I guess we know what we have to do to get down.”
Ross: “Help us! Please, help us! We’re stuck up on the roof, and we can’t get down!”
Joey: I was thinking we’d just go down the fire escape.”

This is from the episode where Joey and Ross get stuck on the roof after waiting for the meteor shower which they missed. After getting stuck, Ross started yelling as expected out of him! But Joey pointed out that there was a fire escape which they could use to go down.

Some people may claim, Joey was the one who got them into the situation by taking out the pipe from the door. But, hey, let’s ignore that fact for a while because Joey really showed courage and calmness even in the adverse situation. And this really matters!

Ross always corrects others if they say anything wrong. But, Joey once pointed out to Ross that he was wrong with his sentence. This shows that Joey too knew the intricacies of English. Quite smart!

BTW, it’s from ‘The One With The Videotape’ episode.

It’s never easy to take down Phoebe with words because, in the end, she will come up with her weird but unstoppable theories. She even took down Ross and his evolution theory, so it’s hard to believe Joey could shut her up with his own theory.

But, as a matter of fact, Joey made Phoebe search for ideas but in vain when they started talking about selfless good deeds. Joey proved his power of deduction is strong if he uses it well. So don’t underestimate the Tribbiani Power, it’s unstoppable, and not just on the bed!

Joey: “You mind if I turn the heat down?”
Joey: “The knob was broken…so I turned it off from underneath. I hope that’s all right.”

Remember the episode ‘The One With Phoebe’s Dad’, when everyone in Monica’s room couldn’t fix the radiator and were almost boiling. But, Joey was the one who came to their rescue. He used his presence of mind and stated the obvious way of switching off the radiator, which left all others to look so dumb.

Joey may act stupid at times, but he is smart enough to understand true friendship always. He does a lot for his friends because friendship means a lot to him.

The scenes were Rachel and Joey couldn’t make out has a special dialogue by Joey where he mentions how special their friendship is. The viewers almost melted away with the dialogue because it was so touching.

#10 Can You Imagine A Room Without A TV?

Joey: “You don’t own a TV? What’s all your furniture pointed at?”

Joey was quite right while he pointed out how can someone arrange their furniture if they don’t have a TV. Well, TV is something no one can imagine to live without.

#11 When Joey Stated Why Everyone’s Bosses Hate Them!

Rachel: “Just come by at lunch so my boss doesn’t see you. Kim will freak out. She doesn’t like me.”
Chandler: “That is weird. I don’t think my boss likes me.”
Monica: “I don’t think mine likes me either.”
Ross: “Maybe it’s a universal thing.”
Joey: “Or maybe because you’re all hanging around here at 11:30 on a Wednesday.”

We always wondered how these 6 friends managed to spend so much time together in the cafe, we got our answer with Joey’s dialogue. He was right to point out that their bosses are never going to like them if they stay away from work for so long. Anyways, their bosses may not like them, but we love them for eternity!

Ross: “I wish I knew, but the evaluations are all anonymous.”
Joey: “Do you still have your final exams?”
Ross: “Yeah.”
Joey: “Because you can match the evaluations to the exam with the handwriting and boom, there’s your admirer.”

Ross thinks he is brilliant! But, hello, Joey is better than him, and he proves it in this scene. The idea Joey suggested was so useful and would give sure shot success. But, Ross couldn’t figure this out. Pity on you Ross, even with your degree and so many awards on your shelf, you couldn’t figure this simple idea.

Joey isn’t so shown to be so sensitive and wise, but sometimes he says things that we don’t expect out of him. And that’s the reason we are saying he was a genius but a silent one. It’s not so easy to understand love and also get prepared to let your feelings go, only a true man with intelligence can accept it so easily. Here we are mate, another plus point in Joey’s ledger.

Joey hasn’t been into serious relationships, but he surely knows how to be good at it. He knew enough to guide Chandler in his relationship issues. And, surprisingly he was right to have advised Chandler to take up challenges and improve himself. Maybe Joey can be a guru someday! The advice applies to everyone in our lives as well.

Though in the show, results turn out to be so cool, but the advice is worth capturing.

It’s a fan theory on the internet for a long time, but it makes sense. The theory says that Joey was a genius all the time. In season 7 where Joey falls in love with Erin, he is said to show his intelligence.

Initially, Joey was never interested in relationships and love, but with Erin in the scene, something different happened. After sleeping with her as usual, Joey asked Rachel to disclose the fact that Joey wasn’t much into her. When Rachel said no to it, JOey expressed how Chandler used to do it for him and also made pancakes after each breakup. But, Rachel clearly didn’t agree to any of the terms. Instead, she and Phoebe convinced him to give Erin another chance.

Later it was shown Joey falls for the girl. Eventually, he is the one who suffers a heartbreak after Erin dumps him. The Fan theory says that Joey did all this just so Rachel would make him pancakes!

Considering, Joey’s reputation when it comes to food, we can expect him to go any levels for it. And if this theory is to believe, Joey was really a genius! Playing such an act for pancakes clearly states he was manipulative and cunning but preferred not to show it.

Whatever, maybe the case, we always love Joey for what he is. And now that we know he is intelligent as well, it’s an added advantage to his charm. Ladies, please don’t go around stalking him around.