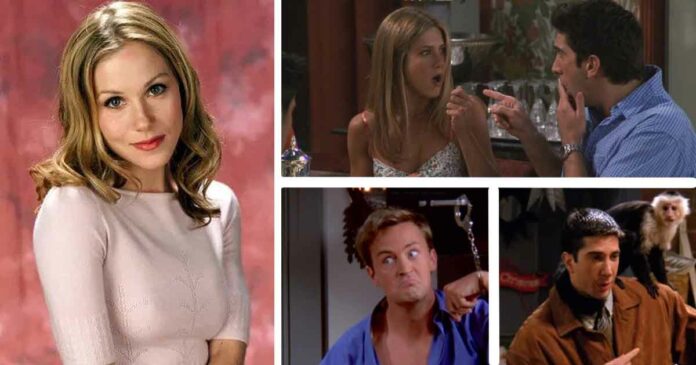 There are many reasons for which we love the evergreen TV Show “F.R.I.E.N.D.S”. Such as the hilarious moments which make us laugh our head off, all the drama, romance and of course the amazing cast who maintained the essence of the show for 10 long years. Another unrivalled reason, the dialogues from the show. By the time you are on the last season, you have already discovered a lot of the iconic phrases and dialogues by each character. Like Monica’s “I KNOW!!!”, Rachel’s “NOOO!!”, Joey’s “How you doing?”, Phoebe’s “He is her lobster”, Ross’ “WE WERE ON A BREAK!!” and Chandler’s “Tell him to email me at www-dot-haha-not-so-much-dot-com”.

I bet you read these dialogues in the same tone as delivered by the actors. But, did you know that some of the most ‘laugh-out-loud’ jokes were not in the script? That’s right, there were many instances where the actors came up with the jokes themselves. Some were made using wit and some were the result of mistakes but the directors didn’t cut them off because they looked so natural!

So I have listed down some of the moments that were unscripted either by choice or situation.

The one where Ross and Ben pranked Rachel!

This is one of my favourite scenes where Ross and his son, Ben play a prank on Rachel. This scene happened when Ross asks Rachel to look after Ben again as he had some work. While Ross was about to leave, Rachel notices a note which Ben had stuck on Ross’ shirt. Angry by the incident, Ross chases Ben out to the corridor and that is when they both pull a prank on Rachel!

Well, in this scene, throwing a look-alike doll was in the script but Jennifer (Rachel) was not informed about it. The result was obvious, Jennifer’s reaction and that scream was 100% genuine. The directors wanted a natural scene and sure they got it. There was one shortcoming in the scene that Jennifer went out of her character and yelled: “Oh my god, David!”. So they had to of course dub over later.

The one where Chandler made a mistake in his joke.

In the episode “The one with Phoebe’s Uterus”, Joey was wearing a Blue blazer of a museum tour guide. This definitely called for a sarcastic joke from the funniest guy “Chandler”. The original line was “I know Donald Trump wants his Blue Blazer back” but Matthew made a mistake and said “blue blazer black”.

Normally, such a scene should be re-taken. But the response from other characters and Matthew’s counter-reaction made it difficult to ignore. The scene was so comic and natural that the directors didn’t feel the need for a re-take.

The one with Matthew’s own joke.

There was one episode where Chandler asks his friends to recommend him a tailor. Joey tells him to visit the tailor he has been going since 15 no wait, 16? No, maybe he was 15… Oh no, that was 16. Well, it was somewhere around 1990.

In this scene, Matthew was not supposed to react but just scoff and let go. But gentlemen, that’s Matthew we are talking about, and he can’t let go of moments where he can add comic elements. So instead of just following the script, Matthew slipped in a line, “Ok, you have to stop the Q-tip when there’s RESISTANCE! And of course that fake gun he had ready to shoot! All credit for this scene goes to Matthew only.

The one where Ross said the wrong name!

Well, I am sure many of you know this already. The scene where Ross says the wrong name at his wedding was actually not in the script. The directors knew they can’t let Ross marry Emily but how to do it was the question.

While rehearsing lines, it once so happened that David by mistake said “Rachel, the taxi is here” instead of saying “Emily, the taxi is here”. And that’s the bit where the directors had their eureka moment! Surely, a Crazy idea! But gave us great laughs and unforgettable memories.

The one with Paolo’s Italian lines.

Remember Rachel’s Italian boyfriend Paolo? Well, turns out his dialogues weren’t scripted because none of the directors knew Italian. At that moment, they had two options where one was to try and come up with actual Italian lines. And the second one was to let the actor, Cosimo Fusco come up with his own dialogues. The directors took a chance and tried the second way out. So the actor ended up devising his own dialogues.

The one with the guest stars.

Billy Crystal and Robin Williams’ appearance was one of the most memorable guest appearances on the show. What we didn’t know, was the fact that everything they did was spontaneous. Looks like the directors were always in for some natural scenes. Hence, they let both of them create their own scene and we all know that they did a wonderful job. They were never specially invited for the show. Rather they stopped by to check out the sets and were asked for an impromptu to which they couldn’t deny.

The one with Marcel being what he is.

Two of the most difficult characters to shoot are babies and animals. It is genuinely hard to control them or rather we should say you can’t control them. And that’s the reason, such scenes take a lot of re-takes.

Coming to Marcel, Ross’ illegal monkey, he was more of a free spirit. Katie was the monkey who played the role of Marcel and she was very hard to control. Katie’s trainer once gave an interview where he mentioned a time when Katie threw a bra at Jennifer Aniston. So, if you see there could have been many scenes where the monkey did things which were not scripted.

The one where Joey hurt his arm.

In one of the episodes, it was shown that Joey hurt his arm while jumping on his bed. We were made to believe that he was hurt after falling from the bed. But the original script didn’t have this. Actually, the script was altered after Matt broke his arm in real. Remember the episode in which Matt and Matthew were fighting over a chair? Well, during their tussle, Matt got some real pain!

The one with Richard Branson as a guest star.

Looks like every famous personality during the ’90s was invited for a cameo by the directors! Richard Branson was also a part of the list. In case if you haven’t noticed, the owner of Virgin Group played the part of a cart vendor in London.

He was so busy that he couldn’t accommodate time to revise his lines before the shoot. So the directors had no choice, but to let Matthew, Richard and Matt made up their own lines.

The one where Christina Applegate couldn’t pronounce Phoebe.

Christina Applegate was one of the best guest appearances on Friends. She played the role of Rachel’s sister, Amy. Remember how she kept calling Phoebe as Emma and thought that the name “Phoebe” was a weird sound?

Well, the idea of not calling Phoebe by name was not in the script. While rehearsing, Applegate struggled in saying the name, Phoebe and that’s how it began. They finally decided to make things hilarious by continuing the same in the final plot!

The one where Carol cries.

We all know how Ross struggled with his relationship with Carol. It was really hard for him to get over his first wife, Carol. In one of the episodes, Ross made one last effort to try and ask Carol to come back. In that scene, the actress wasn’t supposed to cry according to the script. But, Jane couldn’t help herself and tears rolled out after listening to David’s heart-touching performance. And the directors liked it enough to keep the same clip in the final release.

The one where Chandler was handcuffed.

There are some iconic scenes from Friends which are still considered the most hilarious moments. One such scene was when Chandler was handcuffed by Joana, Rachel’s boss, in her cabinet. At first, we see Rachel went into the cabinet and removed the handcuffs and decided to let him go. But then she realized how mad her boss would be when she finds out that Rachel was the one to let him go.

In a panic mode, Rachel handcuffs Chandler to a filing drawer. And just after this scene, something happens that’s out of the scripts. Chandler tries to move his hand and ends up hitting his head to the drawer. The expression we see is totally genuine and we can’t deny it’s one of his best faces we have seen.

The one where Ross and Rachel get divorced.

We all have laughed our hearts out whenever Ross’s divorces are mentioned. One such scene was when Ross tried to convince Rachel to stay married to him. Here again, there was a dialogue by Jennifer Aniston “This isn’t a marriage, this is a world’s worst hangover!” which was not mentioned in the script. Must say, a real funny line by Jennifer!

The one where Mathew Perry came up with a funnier joke again.

The one with the final line of the show

We all know the two main hang out places of the group. One undoubtedly was Monica’s house. Another was, of course, the “Coffee House”, Central Perk. In the last episode when Rachel suggests that they should all go and have coffee together, Mathew like always made a spontaneous joke asking, “Sure, where?”. This again was the clip the directors chose.

It seems Chandler always had the urge to be the one who has the wrap-up line! He can’t stop himself from pitching in great jokes always!

To conclude, I am very happy that the actors came up with their own jokes. Every joke cracked by them is always a delight for us. May we see more of them soon. Till then keep rewatching and keep laughing.