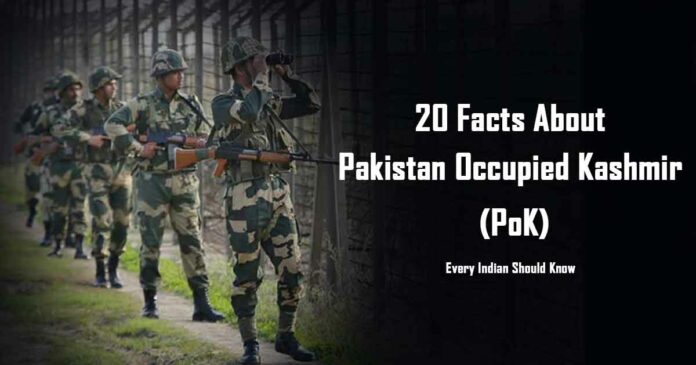 PoK or Pakistan Occupied Kashmir has been a matter of dispute for ages now. But, there isn’t any obvious solution yet. India and Pakistan have been fighting to conclude but all in vain. There are several reasons for this misfortune.

We Indians, while growing up, have always heard about PoK and the disturbances around it. Though we know a lot, still there are things many Indians might not be aware of. So, let’s have a look at some facts around PoK that every Indian should know.

We know PoK as Pakistan Occupied Kashmir but officially, the United Nations and other international organizations refer to PoK as “Pakistan-administered Kashmir.”

The Chief or Head of the State is the President, while the Prime Minister is the Chief Executive Officer supported by a Council of Ministers. PoK also has its own Supreme Court and High Court.

Allegedly, Lashkar-e-Taiba, a massive terror organization in South Asia has several training camps in PoK. Many deny the allegations, but by now the world knows the truth.

The 26/11 attack on India was huge, Ajmal Kasab arrested during the attack, received his marine warfare training in Muzaffarabad.

People won’t be surprised if they know PoK lacks much freedom of expression. They lack any independent media, and the Pakistan Government controls everything. It’s said only One Radio Station is allowed to operate in PoK, named Azad Kashmir Radio.

Source Of Income Of The Residents

A major portion of the population depends on agriculture. Wheat, maize, forestry and livestock are some sources of income for the people. Walnuts, honey, mushrooms, cherries, apples, resin, maple, medicinal herbs and plants, and burning wood are some other agricultural products in this area.

Tourism also helps earn some livelihood for some families. It is said that members of the British Mirpuri community send remittances here.

Pakistan Gave Away A Piece Of PoK To China

The Shaksgam Valley, a region of Raksam and Baltistan, which is a part of the PoK, was handed over to China by Pakistan in 1963. The area is also called a ceded area or Trans-Karakoram Tract.

British Did Not Rule PoK Directly

During Partition, Jammu And Kashmir under the rule of Maharaja Hari Singh was given the option to either join India or Pakistan. But, Maharaja decided to keep Jammu and Kashmir as an independent State.

The Pathan Tribesmen invaded independent Jammu and Kashmir which led to the Indo-Pakistani War of 1947–1948. Pakistan denies playing any role in the invasion, but the shreds of evidence speak a different story.

Pathan Tribesmen Invasion forced Maharaja Hari Singh to seek India’s help by writing a letter to Lord Mountbatten, who was the Governor-General of India then. He received support from Indian Military but after signing the specially designed Instrument of Accession or the 26th October 1947 agreement.

Lord Mountbatten signed the agreement on 26th October 1947 with Maharaja Hari Singh where the Independent State handed over three subjects: Defense, Foreign Affairs and Communications to India. On rest matters, the State was free to take its own decisions.

Jammu and Kashmir observes 26th October as Accession Day and is declared as a public holiday. On this day in 1947, Maharaja Hari Singh signed the Instrument of Accession with India. People celebrate the day by singing the National Anthem of India, bursting crackers and hoisting Indian Flag.

The separatists in Kashmir observe 26th October or the Accession Day as a black day to show their protest against the agreement.

Jawaharlal Nehru, first Prime Minister of Free India, approached the United Nations to settle the PoK issue. The move is considered wrong by many as it left the dispute unresolved for a lifetime.

Plebiscite Demanded By The United Nations

PoK, A Reason For War

All disputes between India and Pakistan, except the war in 1971, are related to the PoK issue. The matter is still unresolved, and as per the current situation if any government tries to let go of the situation or the piece of land, then it would bring havoc to the political party in their respective country.

Gilgit-Baltistan covers an area of 72,971 square kilometres, but the area is mostly mountainous. The population here is estimated to be 1.8 million in 2015 by Shahid Javed Burki (2015).