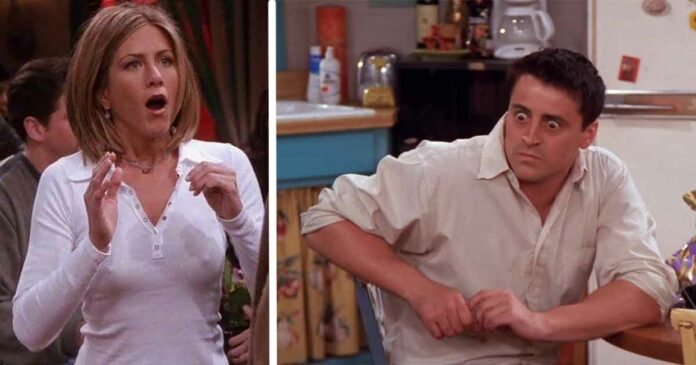 FRIENDS may be one of the most amazing shows of all time, but it wasn’t without its flaws. There were plenty of continuity errors over its 10 seasons and 236 episodes. Television shows do many takes of scenes. Sometimes those takes are put together while editing to make the final version that you see in the episode. And, it results in continuity errors with characters, wardrobe, or props placements.

However, mistakes like that shouldn’t be in the ultimate product. Someone should have seen them while editing. But the fans don’t always recognize mistakes like these because they’re engrossed in the characters and the plot. But fans of FRIENDS don’t just watch it once, some of these mistakes are easy to catch up on when you see them for the second or third time. Here is the list of 20 mistakes in FRIENDS show that you probably didn’t know about. While watching the show multiple times, you might have noticed a few on your own but if you haven’t then let’s check out a few now:

1. Paul Couldn’t Have Used The Stairs To Leave Monica’s Building

Monica led Paul out of her apartment in the pilot after he spent the night. Joey, Chandler, and Rachel watched her say goodbye to him in the doorway. He walked off to the right as she turned to walk back inside. However, he should have walked to the left and leave the building. There could be a possibility of having another staircase, but why it would be close enough to use it? The reason might be is that this was the pilot, and they didn’t figure out the building’s layout yet.

2. The Writing On the Magna Doodle Changed

The writing on Magna doodle at Chandler and Joey’s apartment kept changing across the cuts. At first, when Joey was complaining about staying up all night before a sleep clinic, “Get Out” was written on it. However, it changed to “Poop” when Chandler talked about how he cannot dance at weddings and Ross walked in while Chandler was showing Rachel and Joey how he danced. Perhaps it changed to reflect what politeness forbids them telling Ross.

In season 1 episode 12, Phoebe told Rachel Paolo made a pass at her. Rachel was upset and grabbed a paper towel which was hanging as a roll in the kitchen. However, she pulled the roll with her, instead of just tearing one-off, sqo it stretched across the kitchen. Rachel then sat at the table holding the paper towel and wondering how she didn’t see it. Meanwhile, the paper towels in the kitchen went from being unrolled to rolled behind her. Watch it closely!

Rachel was watching Marcel when he ran away in season 1 episode 19. As she told Ross what happened, fans saw that there was a picture hanging near the front door, under which there was a table. However, when animal control showed up, Rachel let the woman into the apartment. You could see the picture near the door but not the table under it. How did it disappear in such a short period of time?

In season 2 episode 4, Rachel was clearing mugs from the coffee shop when Ross asked for advice about his relationship. The red mug on the tray was closest to him when he sat down in the chair. However, the mugs changed positions on the counter as Rachel gave him advice. The green and red mugs switched places as Rachel advised Ross to wait to get intimate with Julie. Well, if you want to notice the error in the video, then watch closely when it reaches 2 min 15 sec.

Richard was playing foosball with Joey and Chandler in their apartment in season 2 episode 20. You could see the door behind him and over his right shoulder. It implies that the apartment should have continued to his left. However, as the camera moved as he asked, “could that shot be any prettier?” it made obvious that it was a set. That was the part of the apartment you might never saw because obviously it was never built.

In season 3 episode 2, while everyone was getting ready for Ross’ event, Phoebe got hummus on her dress. And, the stain changed sizes throughout the episode. It sometimes looked like she cleaned off the hummus. However, it then showed up back to the giant stain when it first happened immediately after. And then it stayed there until Phoebe put a giant Christmas ribbon in an attempt to cover it.

10. The Drinks In Joey’s Hand Changed From Bottles To Cans

In this scene, Joey was raiding Monica and Chandler’s apartment to get something to drink for an audition. However, there was a glimpse of a stand-in along with bottles changing to cans in Joey’s hands. Perhaps Joey had a talent of a magician which he never discovered.

11. The Door Went From Open To Shut

In season 3 episode 13, Richard and Monica pretended they could just be friends and she helped him cook. As they squished tomatoes in a bowl, Monica and Rachel’s bedroom doors were both wide open but suddenly Monica’s door was closed when they both realized they were in each other’s personal space.

12. The Wedding Present That Unwrapped And Rewrapped Itself

Ross had a TV appearance in season 3 episode 21 and didn’t know which suit to wear. He showed his two options to Joey and Chandler. He held the blue one in his left and the brown in his right when he took the suits out of the carrying bag and tucked the bag under his right arm. However, before the scene ended, the brown suit was in his left hand and the blue one was in his right and holding the bag behind it.

In season 4 episode 7, Ross offered Phoebe musical advice while she played the guitar. She was holding her guitar while he spoke about his musical history and finding his “sound”. However, her guitar was gone suddenly as she encouraged him to play. He protested briefly but then agreed and Phoebe was once again holding her guitar.

15. The Glass Emptied And Filled Itself

In season 4 episode 14, Monica poured herself nearly a full glass of orange juice. She put it down to feel Phoebe’s baby kicking. The glass was closer to half full by then. However, more juice was added to the glass as she asked Rachel how her date with Joshua went. And again, the glass was less than half full when Rachel said she didn’t see Joshua.

16. A Sock Appeared On Monica’s Hand As She Knocked On Her Door

In season 5 episode 2, Rachel asked Monica to make decisions about her love life. However, Rachel locked her out when Monica didn’t want her to tell Ross about her feelings towards him. Later, Ross was the one who opened the door. There was suddenly a sock on her right hand which is raised to knock again. However, she’d been hitting the door still bare-handed just before that.

In season 5 episode 13, Phoebe’s grandmother’s funeral happened. She held several pairs of 3D glasses in her both hands when the others joined Phoebe. She gave one to the man who named himself Frank Buffay. The gang joined her as she realized who he was. The glasses in her right hand were gone as she told them the man was her father.

18. On Which Side Was The Firefighter Holding His Helmet?

In season 6 episode 18, there was a fire in Phoebe and Rachel’s apartment. Joey, Chandler, and Monica went with them to see the damage. They spoke with the firefighter who held his helmet with his right hand. However, the helmet was under his left arm when the camera focused on him again.

19. A Water Bottle Disappeared From And Reappeared In Ross’ Hand

20. What Happened To The Cheap Wedding Dress?

In season 7 episode 17, Monica found a wedding dress she loved but it was too expensive. To get the dress on sale, she fought another bride-to-be. It was a little bit different from the original dress. The other woman stole the wedding band Chandler and Monica was going to get. Monica decided to give up the dress but before that, she showed it to Chandler since it wouldn’t be bad luck for him to see it. However, she was wearing a different dress at that time from the one she picked out at the sale.