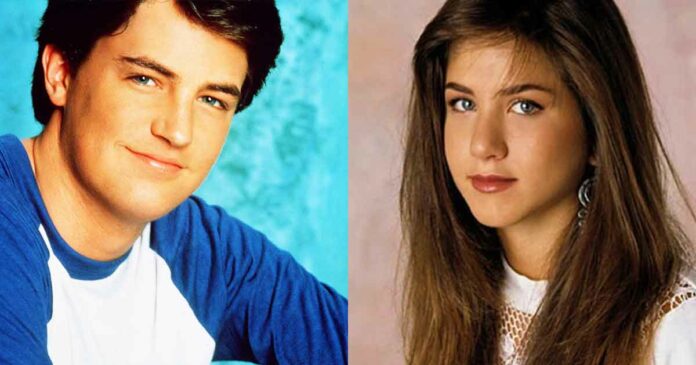 FRIENDS became a television phenomenon after premiering in 1994. NBC’s hit sitcom, which is on the binge-watch list for over a decade now is full of amazing and talented cast members. Even though the entire cast has worked in TV and movies before, this show worked as a catalyst. It made them megastars immediately. It helped them to branch out into movies and other popular shows. However, the cast members also worked in a few movies and series before they got breakthrough FRIENDS. Some of them also got recognition for their work before too. So, here is the list of 20 movies or series FRIENDS cast did before the hit sitcom. Let’s check out this collection of amazing movies and series which have our favorite cast members:

Leprechaun is a 1993 American horror comedy film. The movie is written and directed by Mark Jones. It stars Warwick Davis in the title role. This was the debut movie of Jennifer Aniston. This movie has next reviews.

Molloy is an American sitcom television series aired from July 25, 1990, until August 15, 1990. It starred Mayim Bialik as a carefree native pre-teen girl. It was Jennifer Aniston’s first TV show in which she played the character of self-absorbed teen Courtney.

Mac and Me is a 1988 American comic science fiction film. This movie is co-written and directed by Stewart Raffill. The film centers on a “Mysterious Alien Creature” (MAC) that escapes from NASA agent. Jennifer Aniston appeared as background extras in the movie.

The Edge is an American sketch comedy television series. It is created by David Mirkin aired from September 19, 1992, to May 2, 1993. The series headed by comedian Julie Brown. Jennifer Aniston was in the main cast of the series.

Herman’s Head is an American sitcom aired from September 8, 1991, until April 21, 1994. The series was produced by Witt/Thomas Productions. William Ragsdale stars as the title character. Jennifer Aniston played the role of Suzie Brooks in the series.

Cheers is an American sitcom television series aired from September 30, 1982, to May 20, 1993. Lisa Kudrow appeared in season 8 of Cheers as Emily. The show was created by the team of James Burrows and Glen and Les Charles.

Room for Two is an American sitcom television aired from March 24, 1992, to July 6, 1993. The series stars Patricia Heaton and Linda Lavin as lead actors. Lisa Kudrow played the character of “Woman in Black” in the show. The part she played was short but we could feel the Phoebe or Ursula tantrum in there. In the clip above you will find her at around 27 minutes.

Bob is an American sitcom television series aired from September 18, 1992, to December 27, 1993. The show is created by Phoef Sutton, Cheri Steinkellner, and Bill Steinkellner. Lisa Kudrow played the role of Kathy Fleisher in the show.

Coach is an American sitcom television series from February 28, 1989, to May 14, 1997. The series stars Craig T. Nelson and is created by Barry Kemp. Lisa Kudrow played the character of Lauren / Nurse Alice in the show.

Just the Ten of Us is an American sitcom aired from April 26 to May 17, 1988. It stars stand-up comedian Bill Kirchenbauer as Coach Graham Lubbock. The series is a spin-off of Growing Pains. Matt LeBlanc played the role of Todd Murphy for two episodes in the show.

Vinnie & Bobby is an American television sitcom that aired from May 30 to September 5, 1992. The series is a spin-off of the sitcom Top of the Heap. It was itself a spin-off of Married… with Children. The series stars Matt LeBlanc as Vinnie Verducci on all three shows.

Highway to Heaven is an American fantasy drama television series aired from September 19, 1984, to August 4, 1989. It ranked in the Top 40 for its first four seasons. The series starred Michael Landon and Victor French. Matthew Perry played the role of David Hastings in the series.

Growing Pains is an American television sitcom that aired from September 24, 1985, to April 25, 1992. It was created by Neal Marlens that aired on ABC. Matthew Perry played the recurring role of Sany in three episodes.

Sydney is an American sitcom that stars Matthew Perry, Valerie Bertinelli, and Craig Bierko aired from March 21 to June 25, 1990. The show is created by Douglas Wyman and Michael J. Wilson. Matthew played the role of Billy Kells in thirteen episodes.

Home Free is an American sitcom aired from March 31, 1993, to July 2, 1993. Richard Gurman and Tim O’Donnell are the creators of the show. Matthew Perry played for 13 episodes in the show as Matt Bailey.

The Wonder Years is an American coming-of-age comedy-drama. It aired from March 15, 1988, until May 12, 1993, and is created by Carol Black and Neal Marlens. David Schwimmer played the role of Michael for four recurring episodes in this series.

Blossom is an American sitcom that aired until May 22, 1995. The series was created by Don Reo and stars Mayim Bialik as Blossom Russo. In this series, David played the character of Sonny Catalano for two episodes.

NYPD Blue is an American police procedural drama series. The show was created by David Milch and Steven Bochco. It was ABC’s longest-running primetime drama. David portrayed as Josh ‘4B’ Goldstein for four episodes in the show.

19. Masters Of The Universe

Masters of the Universe is a 1987 American science fantasy action film. It is produced by Yoram Globus and Menahem Golan. The film is created by Gary Goddard that stars Courteney Cox, Dolph Lundgren, Frank Langella, Robert Duncan McNeill, Chelsea Field, and many more actors. Courteney Cox played the role of Julie Winston in the film.

The Love Boat is an American romantic comedy/drama series aired from 1977 to 1986. The series was based on “Love Boats” by Jeraldine Saunders and produced by Aaron Spelling. Courteney Cox played the role of Carol in the episode “Daredevil/Picture Me a Spy/Sleeper”.