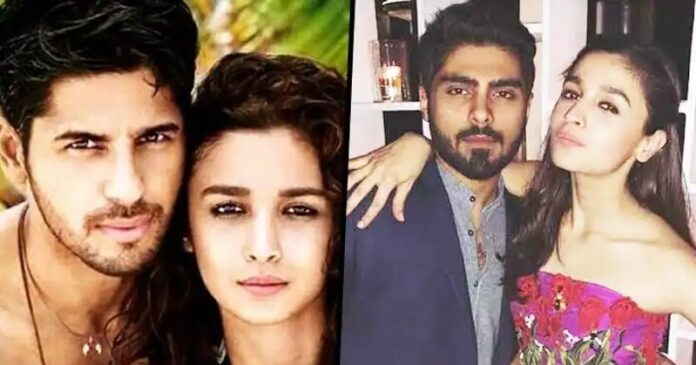 Alia Bhatt and Ranbir Kapoor are the new couples in tinsel town. There is this rumor in the air that they might even get married soon. However, before setting her heart on Ranbir, she has dated quite a few people. Here is the list of Alia Bhatt’s boyfriends that she had before getting involved with Ranbir Kapoor. Check out the list:

Not much is known about this relationship between Ramesh Dubey and Alia Bhatt. He was the first boyfriend of Alia Bhatt and they were high school sweethearts. They came to know each other in Jamnabai Narsee School. Since Ramesh is pretty off the social media and limelight, there are not many pictures available of him. Both were in the same class and their relationship might have begun because of that. However, their school romance fizzled out after some time.

According to industry sources, Alia Bhatt and Ali Dadarkar’s relationship is the first serious relationship that the actor had. Ali is not quite popular but they dated before Alia entered Bollywood. They were in a relationship for a quite long time and is a serious one too. They were often spotted spending quality time together and also pictured together occasionally.

Alia and Sidharth made their debut in Bollywood with the film, Student Of The Year. They were allegedly dating after meeting on the sets of the movie. Even though they never confirmed the rumors of them being in a relationship, it is quite evident that the duo is more than just friends. Reportedly, the affair had lasted quite a while. As per the sources, the couple broke off because of Jacqueline and Sidharth’s closeness. In 2016, both of them worked in Shakun Batra’s Kapoor and Sons.

There were rumors about the two of them dating all around the Bollywood industry. Alia Bhatt and Varun Dhawan started their career together with Student of the Year. The audience loved them as a couple on-screen and this landed them on two more movies together, that is, Humpty Sharma Ki Dulhania and Badrinath Ki Dulhania. However, they never did accept their relationship and always said that they are good friends. Eventually, the rumors faded away because of Varun’s then-girlfriend and now wife, Natasha Dalal.

Kavin Mittal is the son of a well-known business tycoon, Sunil Mittal. Alia Bhatt and Kavin Mittal allegedly dated a while ago. They met during a seminar and immediately hit it off. As per the sources, they became close friends at first and then developed feelings towards each other further. However, the relationship didn’t last long and they broke off indiscreetly.

Currently, Alia Bhatt and Ranbir Kapoor are dating. They are collaborating on Ayan Mukerji’s film, Brahmastra. It is a sci-fi film. They first made an appearance at Sonam Kapoor’s wedding together and later we have them together on several occasions like on lunch dates, parties, or holidays. The duo is also close to each other’s families and Alia Bhatt is often pictured with Ranbir’s mother, Neetu Kapoor on several occasions. She was always with him in his toughest times. Recently, the couple started living together. They seem to be going strong and there have also been rumors of the two getting married soon. However, nothing has been confirmed yet.

For now, Alia Bhatt is all set to feature in Ayan Mukerji directed Brahmastra sharing screen space with Ranbir Kapoor. The film also stars Amitabh Bachchan, Dimple Kapadia, Akkineni Nagarjuna, and Mouni Roy. This superhero sci-fi film was all set to release in 2020 but due to the Coronavirus pandemic, it did not release as per schedule. However, it is all prepared to release in 2021. Besides this Alia Bhatt is also starring in Aashiqui 3, RRR, Takht, and Gangubai Kathiawadi.