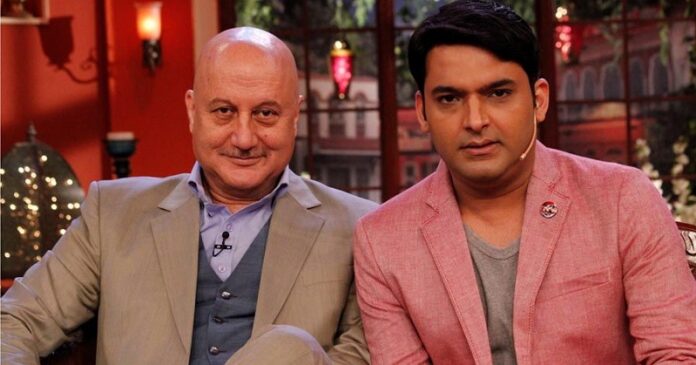 Filmmaker Vivek Agnihotri claimed that Kapil Sharma refused to promote his film, The Kashmir Files on his show because it ‘lacked big stars’. The film The Kashmir Files is based on the exodus and killings of Kashmiri Pandits in the 1990s.

Kapil responded to the controversy by saying one shouldn’t believe in a one-sided story. But that did not stop the trolling. Some even dragged the producer, Salman Khan of the show, into the controversy and called for a boycott of The Kapil Sharma Show.

During the post-release promotion of the film on Times Now, Anupam Kher clarified that he was invited by the makers of The Kapil Sharma Show but he refused to attend the show since their film’s subject was not in sync with a comedy show.

However, it was observed that the clip that Kapil posted was only 46 seconds long when the actual clip about the controversy was actually over a minute long.

Anupam can be heard saying this in the clip posted by Kapil,

“To be very honest I must say it here I was called to be on the show. Maine Harman, jo mere manager hai, usko kaha tha ki ‘Ye film bari serious hai, main isme nahi ja sakta hun (I had told Harman, my manager, ‘This film is very serious, I can’t go on the show)’. So I want to put my point over here. It happened around two months ago that I was told ‘Aap aa jaiye (Please come)’. I have been on the show a few times and it’s a funny show. It’s very difficult to do a funny show and he does it very well. I don’t think Kapil has any malice towards us or towards the film.”

In the longer clip, Anupam mentions that the reason given to Vivek was that they weren’t invited to the comedy show because their film lacked big stars. He also mentioned it on Twitter.

Vivek also added that lacking big stars was the official reason given to him by Zee Studios, The Kashmir Files producer.

Since Kapil did not post the full clip and posted just the shorter version of it while thanking Anupam Kher for his clarification, the veteran actor responded to it by asking him to not share the “half-truth”.

“Dear @KapilSharmaK9 ! I wish you had posted the full video and not the half-truth. The entire world is celebrating, you also celebrate tonight. Love and prayers always!”

Dear @KapilSharmaK9 ! I wish you had posted the full video and not the half truth. The entire world is celebrating, you also celebrate tonight. Love and prayers always! 🙏🌈 https://t.co/QS3i5tIzh8

Trolls came after Kapil after Anupam’s reply about sharing “half-truth” even though Kapil shared the longer clip on his timeline.

Take a look at some of the reactions trolling Kapil:

I knew that, The Kapil Sharma is hiding something. I don’t like that person from starting.

I am not surprised to know that Kapil Sharma is hiding something. He has circulated half truth. What a loser @KapilSharmaK9

A lot of people supported Kapil and pointed out that he did post the full video clip in a separate tweet.