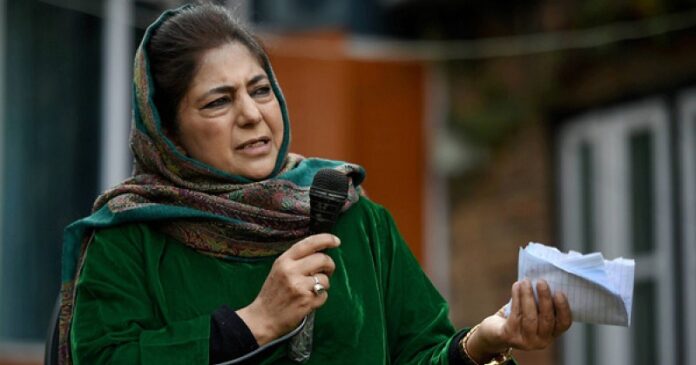 “The Kashmir Files“: Mehbooba Mufti claims that the Centre is “deliberately tearing them apart” rather than healing old wounds and fostering a congenial environment between the two populations.

Written and directed by Vivek Agnihotri and produced by Zee Studios, ‘The Kashmir Files’ has sparked massive controversies since its release. The movie depicts the diaspora of the Kashmiri Pandits from the valley in the 1990s. PM Narendra Modi stated that the film accurately represented the facts, and that history must be given in its proper context from time to time. The movie has received great encouragement from the Centre, and also got a nod from the PM when the makers met him for the promotion of the film.

Former Chief Minister of Jammu and Kashmir Mehbooba Mufti has criticized the Indian Government, saying that the manner in which it is “aggressively promoting” Bollywood movie “The Kashmir Files” and is “weaponizing the pain of the Kashmiri pandits” reveals their actual intentions.

The manner in which GOI is aggressively promoting Kashmir Files & is weaponising pain of Kashmiri Pandits makes their ill intention obvious. Instead of healing old wounds & creating a conducive atmosphere between the two communities, they are deliberately tearing them apart.

Dr. Farooq Abdullah, the Patron of the National Conference, too had something to say about the video. Abdullah was the Chief Minister of Jammu and Kashmir from 1989 to 1990, when the state was placed under Governor’s control. Governor Jagmohan Malhotra was in charge of the state during the time of the migration.

“Jagmohan was the Governor at that time. He is no more, otherwise, he would have told (the reality). This is the reason I want the case to be investigated. The Union government should take urgent steps for the resettlement of Kashmiri Pandits. An honest investigation should be held to find out the culprits and why such an incident took place,” said Dr Farooq Abdullah, NC Patron.

Abdullah also urged the Union government to take immediate action to assist Kashmiri Pandits in their resettlement. Abdullah went on to say that a thorough inquiry should be conducted to determine who the perpetrators are and why such an occurrence occurred. “Every film is unique in its own way, however it is crucial that the movie depicts the true picture of an incident”, the NC chief added.

Meanwhile, the Congress has accused the BJP for not acting in favor of the Kashmiri Pandits; saying that it is reaping profits from controversies sparking around the film.

PM Narendra Modi and Home Minister Amit Shah met with the filmmakers, and expressed heartfelt support to the team.

PM Modi stated the people who are continuously waving the flag of free speech are agitated. Rather than analyzing the facts, a campaign is being waged to discredit them. Modi has also used the film to bash his political opponents and critics, claiming that those who oppose it tried to hide the truth about

the violence perpetrated against Hindus in what was India’s sole Muslim majority state.
Home Minister Amit Shah after meeting the film’s team tweeted “ A bold representation of truth. It will work to make the society and the country aware in this direction that such historical mistakes are not repeated. I congratulate the entire team for making this film.” ‘The Kashmir Files’ is exempted from tax in BJP-ruled states.