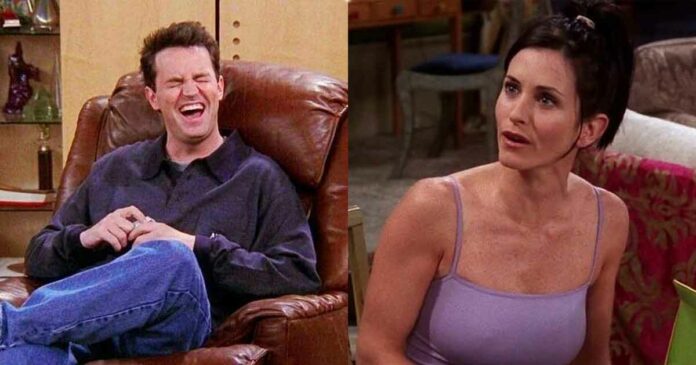 When we talk about the ’90s, one of the many things which strike our mind is the most popular American sitcom F.R.I.E.N.D.S. No one, including the show creators, ever thought that everyone would accept and appreciate the show so hugely. But, the show turned out to be a hit. Not just in the ’90s, but the show is still well-liked by many. The show’s popularity reached a whole new level after it released on Netflix. Fans cherished the cast a lot. So much that by the end of the series the cast earned up to one million dollars per episode.

Coming to the fan clubs, they search and learn every little detail about the show, the cast, the show creators, and much more. By now, the fans probably know everything about the show. Like what was the name of Joey’s imaginary childhood friend (Maurice) and his job (Space cowboy), what was Chandler Bing’s job, something related to transponding, what was Rachel’s actual favourite movie (Weekend at Bernie’s), and a lot more. Most fans already know a lot about the on-screen particulars. So today let me tell you some behind the scene secrets.

We all know that actors have a lot of fun behind the scenes. All the constant jokes and pranks they play on each other seem fun but was it the same for FRIENDS?

Matt LeBlanc was broke when he got the role of Joey.

Matt was a struggling actor back then. He used to do gigs for a living. He was so broke that he only had $11 in his pocket when he landed with the role of Joey on Friends. The actor once revealed that if not the part of Joey Tribbiani, he was going to get a job of a waiter, but the $11 he had would have been long gone by then, and he would have starved. Well, all it took for him was a role on a sitcom to project his talent, and the rest is history.

The reason behind Phoebe being so bad at playing the guitar.

At first, I thought why is Phoebe so terrible at playing the guitar and arrived at the conclusion that this was just how the creators might have wanted it. But, this wasn’t the real reason behind it. This happened because Lisa said she didn’t want to learn how to play the guitar. She did try learning it but ended up learning just a few chords. She found it difficult to play and even suggested Phoebe should play the Bongos instead. But, now after having watched the complete series, we are grateful that she didn’t learn much because we love her faulty guitar playing and is now kind of one of her character traits.

The difficulty in deciding the right name for the show.

Today, whenever the word friend is mentioned, the first thing that comes to my mind is the Tv show, F.R.I.E.N.D.S. But, did you know that the creators faced a tough timing deciding the title for the show? Back then, there was a chance we would have called it by a completely different name. The titles which were initially decided were ‘Insomnia Café’, ‘Friends Like Us’, ‘Across the Hall’. When the pilot was shot, the name of the show was ‘Six of One’. Weird right? We can’t really imagine a better name for this show. F.R.I.E.N.D.S is perfection.

Yes, that’s right. According to the directors, the show was supposed to have four lead characters. Ross, Rachel, Monica, and Joey were the ones who were placed as the main leads. Chandler and Phoebe would have been in the show but they were not allotted many scenes. I can’t really imagine the show without the funniest guy and the coolest/weirdest girl. The show would have been incomplete without them. Not just the show, but also the other four characters. I mean who would have been Joey’s best friends and helped him throughout his career? Who would have Rachel and Monica stayed with? And how we would have missed those aura cleansing, mom stories, and more weird stuff. It is just impossible to imagine the show without these two for me.

Bruce Willis had to make a guest appearance on the show because he lost a bet to Matthew.

Bruce Willis and Matthew Perry starred together in The Whole Nine Yards and grew close. The two had a bet that the film would be number one at the box office on its opening weekend. Perry was sure this would happen and it did. As compensation for losing the bet, Bruce had to cameo on the TV show for free! A wicked bet I would say! Well played Matthew!

Monica was supposed to end up with Joey.

Another huge shock! In the first instance, Joey and Monica were supposed to be the ‘It Couple’ on the TV show. When the Creators were framing the show, they decided that Joey and Monica would end up together. However, after casting the actors, they realized that this wasn’t such a great idea. Even one of the flashback episodes gives us a hint about their chemistry. But Thank God! I mean, I love Joey and Monica but them ending up together would mean Mondler would have never existed and that I cannot accept.