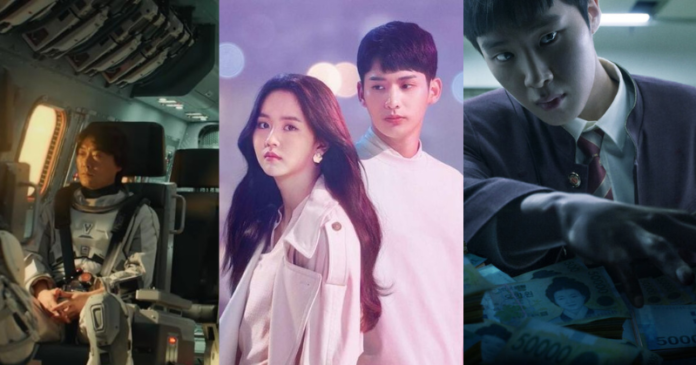 Korean dramas, which are famed for their interesting narratives and stunning plot twists, may suddenly flip from heartwarming to heartbreaking. Variety is what keeps viewers coming back for more. Over the last few years, there has been a steady increase in demand for them. Do you, on the other hand, find it difficult to follow them in Korean? Don’t worry, we’ve compiled a list of the top ten English dubbed Korean dramas available on Netflix just for you!

Here is a list of the best English dubbed Korean dramas you can watch,

New friends, new loves, and new experiences mix inside a dynamic college dormitory in Seoul, where students from all over the world dwell. Se Wan is a dorm manager who works as a teaching assistant. Jamie is a dorm newcomer from the United States. As the son of the president of a multinational tteokbokki food chain, Sam grew up in Australia. Minnie is a Thai student who feeds her lust for Korean dramas by viewing them. Hyun Min is a stateless Korean student who is unable to dwell in the dorm and must travel five hours each day to school.

During the Joseon Dynasty, the twins were regarded to be a bad omen, hence the story takes place during that time. As a result, the daughter of Crown Princess Consort is ordered to be slain when she has twins. She is sent out of the castle quietly to save her. Da Mi, the twin daughter, returns to the palace to work as a maid a few years later. When their male twin, Lee Hwi, dies as a consequence of mistaken identity, their mother, having recognized her daughter as court maid Da Mi, persuades her to take Lee Hwi’s place.

Set in the future, when desertification has caused a global shortage of water and food. Yoon Jae is a soldier for the space agency. He is selected to go to the moon with a party that includes Ji An. A scientist agrees to join a mission to rescue unusual materials from an abandoned lunar space station where everyone was killed in an accident, including her sister. This is one of the best English dubbed Korean drama.

There are stories of people going through seemingly regular but exceptional days at the hospital, which is seen as a microcosm of life, where someone is born and someone’s life ends. The five doctors have been friends for 20 years, having started their undergraduate studies at the same medical school in 1999, and are now coworkers in the same hospital as well as band members. This is one of the best English dubbed Korean dramas on Netflix 2022.

Also Read: The 30 Best Korean Dramas You Must Watch On Netflix

Kim So-Hyun (Kim Jo-Jo) is a high school senior. She is gorgeous as well as intelligent. Her parents died when she was a child, thus she appears to be a cheerful person. Since the death of her parents, Kim Jo-Jo has been living with her aunt’s family. Living there is challenging for Kim Jo-Jo. She does not download the Joalarm application. Hwang Sun-Oh, on the other hand, is a well-liked male student at Kim Jo-high Jo’s school. He comes from a wealthy family, yet his parents despise him. His best buddy, Lee Hye-Young, also attends the same high school. Hwang Sun-Oh notices that his best friend, Lee Hye-Young, likes Kim Jo-Jo. Love Alarm is one of the best Korean drama dubbed in English.

Park Jae-Eon (Song Kang) is a university student studying painting. He seems to be kind to everyone and is always cheerful. He, on the other hand, is uninterested in other people and refuses to be in a romantic relationship. He falls in love with Yoo Na-Bi (Han So-Hee) and endures a transformation as a result of it. Yoo Na-Bi is a fellow Park Jae-institution art student. She had previously ended her relationship with her first partner due to his infidelity. She determined to be unaffected by love after that. She meets Park Jae-Eon and develops affection for him.

Park Joo Hyeong was adopted and moved to Italy when he was eight years old. He is now an adult and works as a consigliere for the Mafia under the name Vincenzo Cassano. Because mafia organizations are in strife, he goes to South Korea, where he becomes linked with lawyer Hong Cha Young. She’s the type of attorney who will go to great lengths to win a case. Now that he’s returned to his birthplace, he gives an unrivalled company a taste of justice.

Years after filming a hit documentary in high school, two feuding ex-lovers are dragged back in front of the camera — and into one another’s lives. Choi Woong appears to be an innocent and free-spirited man, but for the first time in his life, he has a yearning. As a result, he expresses his thoughts. Kook Yeon Soo wanted to be the greatest student in her class when she was younger, but she is now an adult who lives fiercely and adapts to her surroundings. This is the best English dubbed Korean series.

The story of love The coastal village of Gongjin is home to Hometown Cha-Cha-Cha.  Yoon Hye Jin, a dentist, is a stunning woman with a sharp mind. Her life appears to be flawless, but a sliver of morality in her heart is causing her plans to unravel. She travels to Gongjin, a beach town, where she meets Hong Doo Shik after overcoming various challenges. She develops a liking for him. “Chief Hong” is how the locals refer to Hong Doo Shik. On paper, he is unemployed, yet he is a master of odd jobs and a jack of all trades. Chief Hong offers assistance to everyone in Gongjin in the event of a crisis.

This was our list of the finest English dubbed Korean dramas on Netflix. Grab your popcorn and get cosy with these binge-worthy dramas.