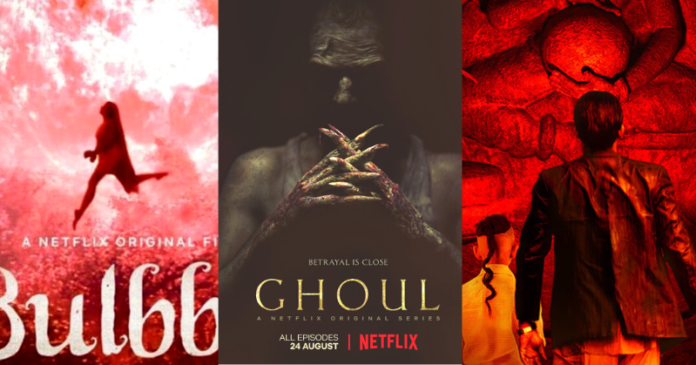 Are you a horror fan? Well, Netflix has the best Indian horror series that you can choose from to satiate your hunger for some spooky suspense thrillers. When we look for ‘Indian horror shows and movies on Netflix’, we expect the number of good Hindi horror movies to be low in our search results. However, you may be mistaken as we have some gems which stand out in Bollywood. When it comes to horror web series on Netflix and horror Hindi movies on Netflix, we generally opt for the Hollywood ones because they excel in that genre. When we talk about Hindi horror movies and shows we often think that they are going to be stereotypical.

But let us tell you that Netflix has the best library for horror content, and a few of them are in the Indian section. We have picked 5 shows that are one of the best among the Indian horror shows and movies on Netflix.

We dare you to check out the 5 best Indian horror web series and movies that we have listed below:

A brilliant young officer is sent in to interrogate a dangerous terrorist who arrives at a high-security military detention center on a dark, rainy night. But things take a different turn when the terrorist reveals a secret from the officer’s past. The military personnel finds herself trapped and being hunted locked in a facility no one has ever broken out of, and eventually realizes that something amongst them is not human. If you still haven’t watched Ghoul yet, you should go for this one as it is among the best of all the horror shows and movies on Netflix. The Netflix series horror features Radhika Apte in the lead role.

Bulbbul is a mystery and fable about a young woman’s journey from an innocent child to a strong woman in a male-dominated era. The story follows the life of a child bride who is married to a zamindar, she grows into an enigmatic woman ruling over her household, hiding her painful past. Soon some mysteries unfold when a series of supernatural murders of men occur in her village. This is one of the Indian horror movies on Netflix which is not for the faint-hearted. Tripti Dimri is in the lead role as Bulbbul.

This film is based on a true story, the people of a small town Chanderi constantly live in the fear of an evil power that resides there. But during a festival, this evil power surges and preys on single young men. Stree is India’s one of the first horror comedy films that is scary and spooky at times but have plenty of comedy, which makes it the perfect watch for people who are not into gore and mainstream horror stuff. The film stars Shraddha Kapoor, Rajkummar Rao, Pankaj Tripathi, and Aparshakti Khurrana, among others.

Also Read: 15 Best Horror Movies Of All Time From Bollywood With IMDb Ratings

Tumbbad is undoubtedly our favourite out of all the Indian horror shows and movies on Netflix. Rahi Anil Barve’s made his directorial debut with this Hindi horror movie on Netflix that is set in Maharashtra, between 1918 and 1947, the story follows a Konkanastha Brahmin family whose three generations seek an ancestral treasure that has been jinxed by the gods. The movie is spine-chilling and is capable to hold your attention and give you goosebumps. Look out for Sohum Shah’s amazing performance in this horror movie in Hindi.

Asian and Hollywood Zombie horror series are quite popular but Betaal is an Indian zombie-horror series on Netflix. This one is under the banner of Red Chillies Entertainment, Shah Rukh Khan’s production house. After accidentally unearthing an old curse, a group of army officials is stuck fighting for their lives as they face a huge battalion of centuries-old British soldiers-turned-zombies.