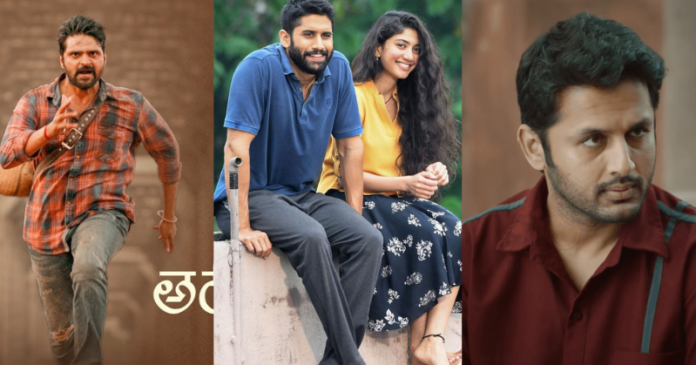 In recent years, Telugu films have been successful in attracting fans to Hindi dubbed Telugu Movies. As a result, Telugu Movies Dubbed in Hindi are now quite popular. It now has a huge fan base. Telugu films are also gaining a large following in India, thanks to their excellent performances and original story concepts. The Hindi audience is one of the most enthusiastic supporters of Hindi Dubbed movies in the South Indian Telegu language.

As a result, Telugu films are now largely dubbed in Hindi, and filmmakers make them widely available on television and online like Netflix and Amazon Prime. If you’ve come to this page, it’s because you’re looking for a list of the latest Telugu Hindi Dubbed Movies in 2022. If you answered yes, your search has come to a positive end.

So, here are the Telugu movies that will be dubbed into Hindi in 2022, along with their ratings and release dates:

George Reddy is a biopic based on the true story of a student leader, boxer, and gold medallist at Osmania University between 1967 and 1972, who influenced the administration of Andhra Pradesh state. Until he was brutally assassinated at his hostel in 1972, he is famous for stirring revolutionary sentiments.

When it comes to their lives, Revanth and Mouni have huge dreams. But, with their social status and gender standing in the way, will they be able to overcome their differences and allow their love to triumph? If you enjoy heartfelt love stories, this is a must-see. Love Story is a Telugu-language romantic drama film directed by Sekhar Kammula and produced under the Sree Venkateswara Cinemas banner. Naga Chaitanya, Sai Pallavi, Rao Ramesh, and Posani Krishna Murali play the lead roles in the film.

Vicky is a simple guy who has had bad luck since he was a child. Vicky feels heartbroken and powerless when bad luck intervenes in his relationship with Chaitra, the girl of his dreams. When Maya, the daughter of Professor Acharya, enters his life, everything begins to fall into place. However, just when things appear to be going well, Vicky’s life is upended by a series of unexpected and strange incidents.

His professor’s murder, the awful truth about Maya, and a mad scientist chasing them down for something. Vicky embarks on a voyage of self-discovery in search of these answers, which allows him to overcome his poor luck and vanquish the baddies with the help of Maya.

A young filmmaker who wants to direct a realistic drama comes across a scary villain and, to understand more about the enemy’s character, he risks his and his friend’s lives. Gaddalakonda Ganesh is a Telugu-language action comedy film directed by Harish Shankar and produced under the 14 Reels Plus brand by Ram Achanta and Gopichand Achanta.

Also Read: Best Tamil Movies Of 2022 (So Far) You Shouldn’t Miss This Year

Because of her values, Kapil (Aadi Saikumar) falls for Kanchana Mala (Shraddha Srinath). What happens, though, when Kapil’s father’s (Naresh) ideas give them problems? The film is being marketed as a romantic comedy. Vishwanath Aarigella wrote and directed Jodi, a Telugu-language love drama film dubbed into Hindi.

Puri Jagannadh wrote the story, screenplay, and dialogues for Romantic, which was directed by Anil Paduri and produced by the Puri Connects company. Akash Puri and Ketika Sharma star in the film. Vasco da Gama is a streetwise thug who turns to crime to make a fortune and fulfill his grandmother’s dream. Vasco assassinates Rodrigues after a botched cocaine deal and proclaims himself the new mafia ruler of Goa. He kills a SI in the process, and a diligent and vicious ACP Ramya Gowarikar is dispatched from Mumbai to Goa to apprehend Vasco.

Shiva enrolls in college in the middle of the semester and learns about JD’s campus violence. He challenges JD by winning the student elections, and the conflict escalates into a full-fledged battle. When Shiva’s friends become victims of JD’s violence, he forms a gang and, one by one, removes JD’s supporters from power, thus cleaning up the corrupt system.

A group of five friends, Arjun, Ram Babu, Thadodu, Oscar, and Shravani, work hard to keep Thadodu’s house from being taken over by the banks in a small village in East Godavari. Teja Marni directed Arjuna Phalguna, a romantic entertaining film. Sree Vishnu and Amritha Aiyer play key roles in the film. Priyadarshan wrote the music, and Niranjan Reddy and Avesh Reddy produced the film under the Matinee Entertainment banner.

Without a doubt, South Indian movie constantly exceeds our expectations. The movies are continuously taking it up a notch. Telugu films, in particular, have all of the qualities of a good picture, and the dubbed version allows them to attract a wider audience in the North.