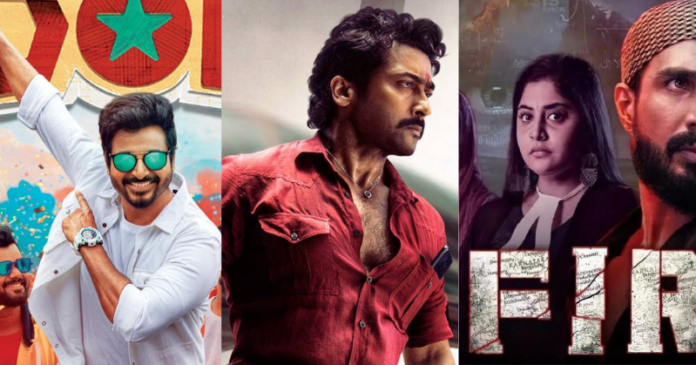 South Indian Hindi dubbed movies are quite popular not only in India but across the world. ‘Kollywood’ or the Tamil cinema industry features the Tamil language movies. Tamil movies have a huge audience base and dominate the Indian Film industry. The Hindi dubbed Tamil movies come out in several genres and have interesting plots. In 2022 a number of amazing Tamil films were released, and we have added a few of the top rated Tamil movies here.

Here is a list of some of the latest and the best Tamil movies of 2022 that you shouldn’t miss:

One of the latest Tamil movies 2022 is Taanakkaran, a period police drama starring Vikram Prabhu in the titular role with Madhusudhan Rao, Anjali S Nair, Livingston, Lal, and M. S. Bhaskar in supporting roles. It is the directorial debut of Tamizh which received a positive response from the audience and is one of the top rated 2022 Tamil movies.

Where to watch: Hotstar

This coming-of-age drama film received positive responses from the audience and reviewers. The plot revolves around a few teenagers studying in a Catholic school in the 1990s. The cast comprises of new artists and it is also the directorial debut of Darbuka Siva.

FIR : Faizal Ibrahim Raiz is an action thriller that stars Vishnu Vishal in the lead role. The movie has received praise from the critics and have been a massive success in the box office. It is on the path of becoming one of the best 2022 Tamil movies. The movie is available on Amazon Prime Video.

Titled after a line from a song in Mani Ratnam’s O Kaadhal Kanmani, Hey! Sinamika is Brinda’s directorial debut. The cast includes Aditi Rao Hydari, Dulquer Salmaan, and Kajal Aggarwal so look out for some stunning performances. One of the best new Tamil movies 2022 on Netflix.

Also Read: 25 Tamil Romantic Movies From South India That Can Be Watched In Hindi

One of the most anticipated and best Tamil movies of 2022 with a stunning cast including Ajith Kumar. The action thriller showcases stunning cinematography and editing directed by H. Vinoth.

A Tamil action thriller, directed by Thu Pa Saravanan stars Vishal and Dimple Hayathi in the lead roles. Veeramae Vagai Soodum was also R. N. R. Manohar’s final film because he died on November 17th, 2021, due to COVID-19. Three months after his death, the movie was posthumously released in February 2022. It is one of the best thriller Tamil movies 2022.

One of the best comedy Tamil movies 2022, Don is Cibi Chakaravarthi’s directorial debut. The movie gained a positive response from the audience since its release. The cast includes S. J. Suryah Sivakarthikeyan, and Priyanka Arul Mohan in the central roles.

After a deadly road accident, the lives of four disturbed youngsters gets connected. They are burdened with the feelings of remorse and regret and try their best to cope with it which eventually transforms them. The movie stars Ashok Selvan and Abi Hassan in the lead roles and is directed by Vishal Venkat.

If you huge fan of Kollywood, you should definitely watch these movies from our list of the Best New Tamil movies 2022.