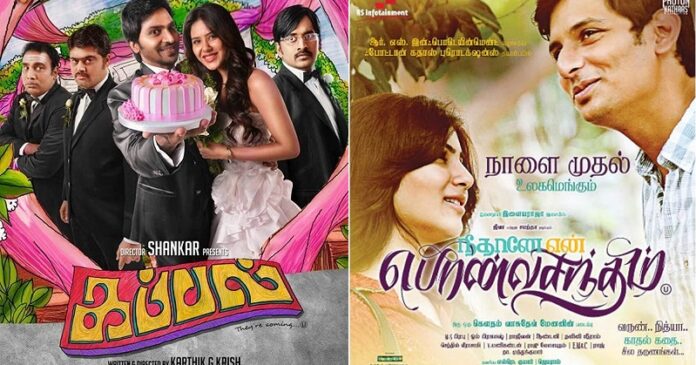 The Hindi audience is one of the largest lovers of Tamil South Indian love story movies. From their power-packed action to their cheesy romance, viewers love everything about South Indian movies. That is why nowadays, Tamil movies are largely dubbed in the Hindi language. Filmmakers make these movies easily available to the audience so that they can get entertained without any hassle.

So, here is the list of Tamil South Indian love story movies that can be watched in Hindi by the Hindi audience anytime they want. Let’s check it out:

In the South love story movie list, “Chandi Veeran” tops the list. It is quite popular with the name of “Vilayati Hero” among the Hindi audience. This movie is an action-based romantic movie where a young man tries to stop a village feud. Featuring Atharvaa Murali and Anandhi in the lead roles, this is a must-watch movie.

“Kodiyil Oruvan” is yet another action-based romantic film that features Vijay Antony and Aathmika in the lead roles. In the movie, you can watch how a certain situation pushes a common man to oppose an influential guy in his area. You must this romantic movie a try that comes under the South love story movie list.

Featuring Vijay Sethupathi and Lakshmi Menon, “Dhamakedaar” is one of the best romantic movies on the South Indian romantic movies list. With a 7.8 IMDb rating, this movie showcases great chemistry between the characters. Perhaps that is why you must watch this Tamil romantic movie.

South Indian movies are always packed with action and “Siruthai” is among them. However, this movie is also famous for its romantic angle in the film. Featuring Karthi and Tamannaah Bhatia in the lead roles, it comes under one of the most-watched South Indian romantic movies lists.

“Vaaliba Raja” is a romantic comedy movie that is laced with family sentiments. If you don’t know, Santhanam is playing the role of a psychiatrist in the film. You must watch this South love story movie if you like to watch romcom movies.

Directed by Dharani, “Dhill” is an action-based romantic movie. This movie is famous as “Meri Aan: Man in Work” when it comes to the Hindi dubbed version. The story of this movie revolves around how a young police aspirant gets into an altercation with a corrupt cop who wants to ruin his life and career prospects.

Featuring Teju Ashwini, Prudhviraj, and Motta Rajendran in the lead roles, “Paris Jeyaraj” is a romantic drama movie. This movie witness how a Tamil folk singer’s love life takes cruel twists of fate because of his secret extramarital relations and his lawyer father. It is undoubtedly a must-watch South love story movie.

“Thirupaachi” is a romantic movie that is filled with astounding action sequences. Featuring Joseph Vijay, Trisha Krishnan, and Kota Srinivasa Rao in the lead roles, this movie comes under one of the best romantic South Indian movies lists.

“Arputham” is a romantic movie where a careless man falls for a beautiful girl. But when she rejects him after all of his efforts, he decides to change his life. Featuring Raghava Lawrence and Anu Prabhakar in the lead roles, this movie comes under the best romantic South Indian movies list.

“Iruttu Araiyil Murattu Kuthu” is a romantic horror movie where a sexually-starved spirit traps two couples in a bungalow. And, the spirit wants one of the two men to get intimate with her. Even though it is a horror movie, you must watch it if you are looking for a different kind of romance.

When it comes to the South romantic movie list, we cannot complete the list without mentioning the movie “Dagaalty.” The story of the movie revolves around a conman who tries to save an innocent girl from the clutches of a womanizer after realizing that he had fallen for her.

Famously known as “Dangerous Khiladi 7” in Hindi, “Saravana” is an action-based romantic film. This movie witness how a man saves his best friend’s sister whom he had fallen in love with during a fight with rival thugs. It surely comes under the best South romantic movie list.

Featuring Santhanam, Anandraj, and Krithika Bala in the lead roles, “Biskoth” is a romantic comedy movie. The story revolves around 3 generations and those three individuals played by Santhanam. Interestingly, they have no relation to each other.

“Gurkha” is a romantic thriller movie where a group of ex-army officials takes innocent people at a shopping center hostage. However, a security guard of Gurkha descent sets out to save them when he learns that the captives include the woman he loves. It is a must-watch movie under the South romantic movies list.

In the South romantic movies list, “Taana” is one of the best romantic movies to watch. The story of this movie revolves around a man who faces many challenges in order to become a police officer because of his speech disorder. Interestingly, the disorder is that his voice turns feminine when he is nervous.

Famously known as “Kismatwala” in Hindi, “Manal Kayiru 2” is a romantic comedy movie. The story of this movie revolves around a girl who puts forward eight different conditions in front of her parents when they decide to get her married. However, despite marrying the man who meets her demands, she ends up dissatisfied.

As the name suggests, “Neethaane En Ponvasantham” is a romantic movie where two childhood friends are in love with each other. However, they break up with each other due to different career choices. Later, the guy meets her and tries his best to win her back. It is undoubtedly one of the best love story South movies.

Featuring Sonam Bajwa and Vaibhav Reddy in the lead roles, “Kappal” is a romantic comedy movie where a guy and his friends decide to never get married. However, his friends decide to ruin his affair when the guy finally falls in love with a girl. It is a must-watch love story South movie.

“Namma Veettu Pillai” is a romantic movie where a young man is forced to marry his sister off to a local thug due to pressure from his family. And later, the ruffian uses this relationship as well for bullying him. Even though this film is mainly based on a brother-sister relationship, it can be watched if you want a family romantic movie.

Popularly known as “Aisi Deewangi” in Hindi, “Thenmerku Paruvakaatru” is an action-based romantic movie. This movie revolves around a goat shepherd who falls in love with a female goat thief. Unfortunately, his mother opposes their relationship. This basic family romantic movie will surely sweep you off your feet.

“Idhu Namma Aalu” is a romantic comedy movie where a couple meets through their families and likes each other. However, in the form of a past love affair and parental discontent, hurdles keep coming in the path of them getting married. You must watch this movie in order to know how they get rid of all the hurdles to be with each other.

Featuring Vishakha Singh and V. Sethuraman in the lead roles, “Kanna Laddu Thinna Aasaiya” is a romantic comedy movie where four friends start competing with one another to win the affection of a beautiful girl who just moved into their locality.

“Aandavan Kattaai” is a romantic comedy movie in the Tamil language that is dubbed as “Pappu Passport” in the Hindi language. The story revolves around a guy who uses a fake spouse name to apply for a passport to fly to London. Later, he feels guilty about his actions and tries to find a girl with the same name to solve his problem.

“Comali” is yet another romantic comedy movie where a youngster in his mid-30s is coming to terms with the fact that he was in a coma for 16 years through a series of struggles. Featuring Jayam Ravi, Kajal Aggarwal, and Samyuktha Hegde in the lead roles, it is one of the funniest romantic movies to watch.

“Baahubali: The Beginning” is one of the most famous action-based romantic movies that are popular in all languages. This movie revolves around a guy who learns about the conflict-ridden past of his family and his true legacy in order to woo her young warrior woman.