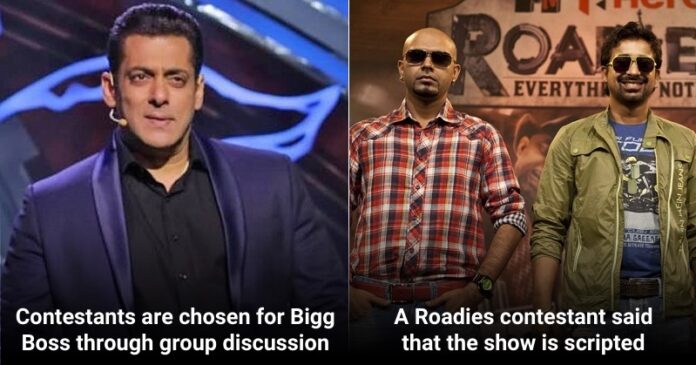 Who doesn’t love or watch Reality Shows! Reality TV shows’ TRP’s are always soaring high and they are very popular among all age groups. Though some feel like too good to be true, no one actually gets to know how they work or what they do behind the scenes. Some fans are too loyal to believe that the shows do have a lot of secrets.

Here are some secrets shared by the Ex-Contestants of the shows:

Priya Malik and Shefali Bagga, the Bigg Boss contestants shared some hidden moments of the show

1. The contestants chosen for Bigg Boss have to take part in a group discussion before entering the show and this selection process is only limited to the ‘commoners’. The discussion is done to observe and get an idea about the temperament of the contestants who are eventually picked by the Bigg Boss team.

2. The contestants have to do all the household chores and cleaning in the house themselves, no crew is there to help them with it. So, when you see a contestant mopping it is actually real.

3. During the weekend episodes of Bigg Boss, Salman Khan brings homemade delicacies for the contestants like aloo gosht, biriyani, etc.

4. In between the shoots, Salman Khan rests in his personal room. Yes! he has his own room with a lounge area and a gym near the set.

5. To influence people’s perspectives, the show is heavily edited but not fixed.

Now there is KBC, the people who successfully participated in the show shared some hidden secrets about the show on how they reached the hot seat and what happens after that.

6. In the show, the amount earned by the contestants reach them after a certain amount of tax deduction which can go up to 31%

7. When a contestant opts for the audience poll, the results are mostly inaccurate because a lot of them do not have polling devices.

8. As soon as a contestant is selected after playing the fastest finger first, they immediately inform 3 people who have been nominated to phone a friend.

9. People who come from rural areas are given more attention and the show also focuses on people who have a story to share.

10. According to the sources, the Roadies contestants are made to sign a contract that prohibits them from sharing any backstage or production information, or else they will have to compensate for their actions by paying ₹10 lakh.

11. A contestant named Palak also said that people are eliminated on the basis of how much the people are liking them and that the show is scripted. Even the wild card entries are also based on people’s liking.

12. Some reports suggest that an ex-contestant of the show Splitsvilla said that the show is rigged if not scripted. He added that to get more screentime, the contestants act fake. The makers also ask the contestants to acts or behave in a certain way to gain more TRP’s.

13. An Indian Idol contestant once revealed that there are no facilities of a toilet at the venue where they have to stand and wait for long hours in a queue for their turn. Some don’t even leave the queue to get some refreshments as they fear losing their place.

14. He also added that people are made to recite scripted bits in front of the camera by the production team.

15. It was also heard that they ask people to sing randomly and those who are not good are sent for the audition in front of the judges just for some laughs.