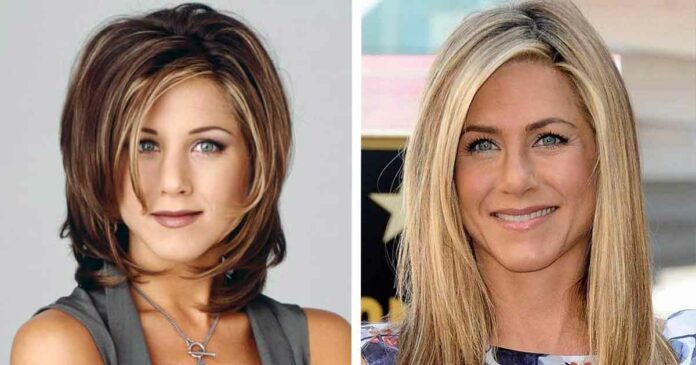 We all love Rachel Green. She is so beautiful and lovely that every guy who watches Friends is sure to fall for her at least once. Maybe, many ladies have a thing for her too! The fact that she made her life on her own after leaving behind her father’s money adds up to her beauty because who doesn’t love a beautiful and confident woman.

Despite all the love we have for her, we can’t ignore the fact that she too did mistakes in her life. She was a goddess in terms of beauty but was a human after all, so it’s natural for her to commit mistakes like everyone else. Today, let’s discuss a few mistakes committed by Rachel Green in Friends. We don’t mean to demean her by pointing out her flaws, but just keeping a note with a light heart. So if you are in love with her too badly, please don’t get offended!

And, here we begin.

Rachel accepted Joey’s proposal! That episode was quite strange because no one expected it to happen. Accepting a proposal out of love is acceptable but doing it because you don’t have anyone else in your life is just so pathetic. It just shows us how vulnerable she was without a relationship. Contrary to the episode, we love to believe the fact that Rachel is a self-dependent woman. But this move of hers made our views question a bit.

Did she really believe she could maintain the relationship with Joey? And if yes, then how? She didn’t love him as a lover, only friendship will never make a marriage last! So it was a terrible decision by Rachel as a whole.

Three years of painting houses” and “two whole summers at T.G.I. Friday’s” is what was mentioned in Tag’s resume. If you are in charge of hiring someone. it’s a clear rejection. But Rachel somehow felt it was Ok to hire him based on the fact that he was cute and good looking. She also managed to believe that her attraction won’t be a problem. Isn’t this betrayal towards your Job and organisation that we are talking about?

Not just the decision to hire him was wrong but also the fact that she went into an affair with Tag even after getting warnings from Mr Zelner and the gang. The relationship was not so strong as they were clearly not a match. But she maintained it anyhow until her 30th Birthday.

The way she ended up things with Tag was another shocker. It was so abrupt and it was clearly sensed that she only cared about her feelings and Tag had to just accept it.

#3 Rachel Goes Back To Barry

Everyone makes relationship mistakes in their early twenties, and Rachel was no exception. She knew about Barry’s relationship with her former BFF Mindy and also that they were engaged. But still, she decides to go back to Barry even after having previously confessed that she was not attracted to him. The time when she tries to break up with him but ends up having sex on his dentist’s chair was also too weird.

Rachel and Barry had a short-lived fling but it was really weird because it was like a compromise with herself she did. Another amusing thing about the plot is the fact that she got too mad at Ross with the “we were on a break” thing. Didn’t that sound a little similar to what she allowed Barry?

Leaving a man at the altar is never a great thing to do. It was not like, she didn’t get time to think and get to a conclusion. Imagine the scene when Chandler was going to do the same thing to Monica, did we not feel bad about it? The fact that we didn’t know Barry in the first episode helped us let it go so easily.

After knowing the truth about Barry we felt it was the right decision to leave him behind. But the embarrassment he had to face because Rachel ran away must have been so harsh. So we can never say Rachel did it the right way, it’s a mistake she did on her part.

It seems Rachel never does the right thing at the right time! She loved Ross and wanted to confess it to him just before he was getting married to Emily. She wanted to get those emotions off her chest, and yet she waited until the worst time possible to do it!

Ross had harboured feelings for Rachel but her appearance threw him for a loop and we know the result! Though Rachel didn’t confess her love for Ross, her appearance had done the damage already.

#6 Being On A Break With Ross

The ultimate debate that’s never-ending for fans is the “We were on a break” scenario. For Rachel, they weren’t on a break, despite being the one to suggest it. We know that the terms were not outlined specifically and that gave rise to all the problems.

In Ross’ defence because of the lack in a proper outline, for all he knew was that they were done. Though not the best move by Ross but Rachel too was wrong to put a break tag on the relationship and expect things would be nice forever. Rachel had every right to be hurt over his actions, but to say that he was stepping out on her when they were on hiatus wasn’t exactly fair.

#7 Jealous When Ross Has A GF

On one hand, Rachel wanted to push away Ross but she also got jealous whenever he had a new girl in his life. If she was really over with Ross then she should have just moved on and let Ross live a peaceful life. Getting into his life to destroy his other relationships was not a good decision.

First, we see Julie, Ross was having a good sync with Julie, but then Rachel left a rambling message on his machine telling him she was “over him” despite not expressing any interest previously. Then there’s Bonnie, she made her so jealous that Rachel persuaded Bonnie to shave her head. Later, she admitted her feelings for Ross. And then we see Emily, where she almost dashed to stop the wedding.

If Ross wasn’t right for getting together with another woman mere hours after being on a break with Rachel. Then should she be ok with Mark inviting himself over when she was feeling low?

Rachel knew how Ross felt about Mark, though at first, that jealousy was unwarranted, eventually, it turned out that Ross’s instincts were right. The plot where Ross was calling while Mark was with Rachel was indeed painful but could have been avoided if these two had had an adult face-to-face conversation rather than assuming the behaviour of one another.

After such a dramatic and unusual wedding, Ross decides to wait for Emily at the airport to take their honeymoon trip to Greece. While Ross was waiting there, he ran into Rachel, who was waiting for her own flight home. Ross somehow asks her to join him in his Greece trip instead. And to everyone’s surprise, Rachel accepts and even boards the plane.

In the season 4 opener, Ross reunited with Rachel after she admitted to being still in love with him. However, before they got back together, Rachel gave an 18-page letter to Ross and wanted him to read it all.

As we understand, there was a huge problem in the letter as Rachel wanted Ross to take full responsibility for everything that went wrong in their relationship. On top of that, Rachel continuously used the term cheater to refer Ross and as expected, they again went into an argument or battle if you prefer to call.

Ross and Rachel had a huge history, and sometimes people fall back into something comforting and known than risking to lose it all with someone new. Having said this, do you think Rachel made a big mistake by not choosing Gavin?

Gavin respected Rachel’s career which was not missing in Ross’case. Maybe the reason was they were in the same line of work but still, he respected her work. Gavin also made an effort with her and Emma. And he was sweet enough to bring her some soup when she was sick, at least what the people at the office knew! From what we have seen about Gavin, he had nice electric chemistry with Rachel. Also, don’t forget that he gifted her a scarf which she likely wouldn’t exchange for something else.

So, maybe Rachel was wrong to have not considered Gavin in her life. Also, Gavin made a mistake when he did not fight for the girl.

#12 When She Got Off The Plane

(In case if you are wondering where to get more pics like the one above, and are there any more pics like this, then here is the source: Friends Dialogues In Pics. Inside this post, you will find more iconic dialogues by Friends characters and all in this beautifully designed template.)

The scene where Rachel got off the plane was too romantic and cheesy but sorry to all the Ross-and-Rachel-fans, but it was one mistake by Rachel. After the unnecessary back-and-forth between Ralph Lauren & Louis Vuitton orchestrated by Ross, Rachel decides to leave her lovely job in Paris to stay with Ross, and please note, he didn’t even try to tell her until the last second that he still had feelings for her.

If the relationship was so strong then Ross too could have moved to Paris to support her or LDR was always an option. So we consider saying, Rachel should never have gotten off that plane.