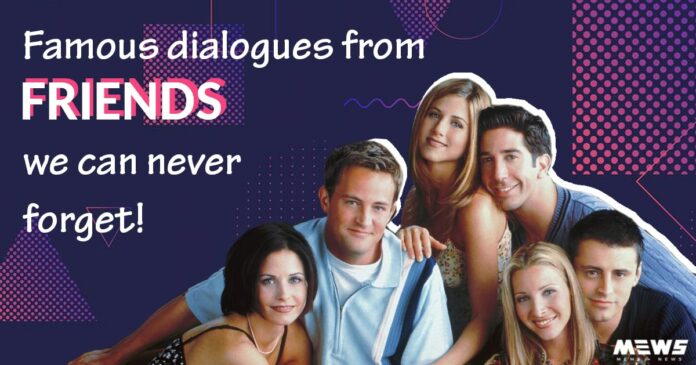 Friends Series has given us memories we can never forget. The series is life for many and we can never seem to get over this obsession. True fans can always relate themselves to the character they love and they often use dialogues from Friends to make their real-life cool! It’s really great actually because if you are using Chandler’s lines in a conversation then no one can ever get you out in a conversation!

Here we have collected some iconic dialogues and expressions from the Friends Series that we can never forget! In fact, you can share them as status or post to start a conversation with all the Friends freaks around you.

#1
Monica was superb in a unique way! She was competitive and filled with energy always. Her one dialogue and the way she says it has become iconic. Friends seem incomplete without Monica shouting “I Know!”

She looks cute and adorable at moments while delivering the same dialogue. Lucky guy Chandler that he gets to keep a gem like Monica forever. And we are sure with every praise he passes he will always hear one “I Know!”

#2
Phoebe loved to sing and Smelly Cat was one of her best song that has gone viral on the series and even in real life. Though it’s not her own tune, as we acknowledge in a later episode that her father used to sing a similar song while Phoebe was a kid. So she grabbed the tune from her father and made it wonderful with Smelly Cat and we seem to like it a lot!

#3
Usually, we don’t expect Joey to be smart and sound sensible but when he does, we just can’t forget the moment! When he said about the Moo Point, it was a moment we can never forget. These particular lines in the series didn’t seem like some Moo Point at all!

We somehow managed to decode the lines, but think about poor Joey!

#5
This line or the scene was something that Matthew Perry came up on his own. The actual lines in the scene were something different but Matthew had this line in mind and did it. The directors loved the improvision and they kept it in the show.

#6
Well, this line by Rachel didn’t explain itself as good as intended but for us, it meant huge laughter. This scene where Ross is seen so happy for the moment when he hears those words and the way he says he doesn’t have a problem with it! All perfect to remember for a lifetime. A little naughty line but quite funny!

#7
Oh My God, Janice! Yes, this is a line which you can easily hear in your mind once you see the pic. Janice and her unique voice is unforgettable! Her signature dialogue made us laugh and get irritated at the same time. Anyways, Maggie played her character quite well and we will always remember her for that. But, we surely don’t want to meet her in person and get a first-hand experience of that voice!

#8
Lobsters fall in love and mate for life! So are Ross and Rachel really a lobster couple? Well, that question is debatable but the fact that we enjoyed this concept by Phoebe is not. It has turned out to be a pickup line for many friends fans out there! Did you too try this line on someone you love?

#10
That weird and perfect Phoebe way of answering things is just so lovable. Only if people had that confidence like Phoebe, they could do wonders. Well, it might take us time to learn her way of answering but this dialogue can be the beginning of learning to be Phoebe.

Well, we really wish we could help you grab some confidence like Phoebe, but the fact is, we don’t want to. So bye! 😜

If you want the same images in high quality then visit our Pinterest account by clicking here.

#11
Friends have some iconic moments and scenes and this is one of them. The scene where Rachel gets off the plane and comes back to Ross is so beautifully written that we can’t help but smile to it.

#12
Joey imitating Chandler is something we love a lot. It was not the only time when JOey tried to imitate his roommate Chandler. Do you remember Monica’s party where he dresses up as Chandler and did a bit of his accent! That was so perfect and hilarious that no Friends fan will forget it ever!

Well, this scene where Joey wears all clothes of Chandler while he is going commando was great. However, poor Chandler he just seemed to have a bad day in the episode.

#13
Do you ever wish to go on a date or just a dinner with Joey? Well, many would back off because when it comes to food, Joey doesn’t seem so friendly. The fact is Tribbiani’s love food and Joey especially loves it so much that he doesn’t share food at all! So don’t ever dare to ask him for it.

#14
Throughout the show, we have had enough of Ross shouting the same line over and over again. Well, we have heard it so often that we don’t want to hear it again, not even for one last time. So end of discussion!

#15
Ross and Rachel were meant to be together and they just couldn’t get over each other. No matter how much tried to go over the other, they ended up getting under each other again and again.

#16
Poor Chandler! His lady luck seems unfair until he meets Monica. And now he has no reason to complain anymore. Well, there might have been a reason for not being able to get many women. Probably, God wanted him to save it all for the most special lady, Monica. And by this, we don’t just mean saving love!

#17
The best life lesson one can ever get is here. Just look at your life, is it perfect? No, right!
Well, no one’s life can ever be perfect but we love it anyway. So it’s true that the real world sucks but there’s a lot to enjoy in it. Pure wisdom by Monica in here!

#18
It’s never justified to sleep with your friend’s girl and Joey had all the right to get mad at Chandler. Well, Joey surely was too angry to have said such a scientific statement curse to Chandler.

#19
After this episode would you ever like to give a hand to Ross? If I were in your position the answer would be a straight No!

Ross can be pathetic at times with his obsessions and methods. Pivot Pivot Pivot became something Friends Fans can never seem to forget because it gave us some tough laughs.

#20
Need some advice? Well, you can head on to Joey for some advice and motivation! The way he motivated Ross with this dialogue was cool. We know Ross can never deny a thing when his Dinosaurs are related to it. So smart move by Joey!

#21
After reading the line do you feel something too?
Be cautious, this dialogue by Joey is too dangerous as it can get you laid!
Jokes aside, there’s no one who can say this line better.

#22
Chandler Bing and his sarcasm has no match!
Ever in life, you need some sarcastic comment, just tune in to Chandler’s videos and you stay surrounded by tons of sarcasm. Actually, many have learned the true meaning of sarcasm after watching Friends. All credit goes to Chandler!