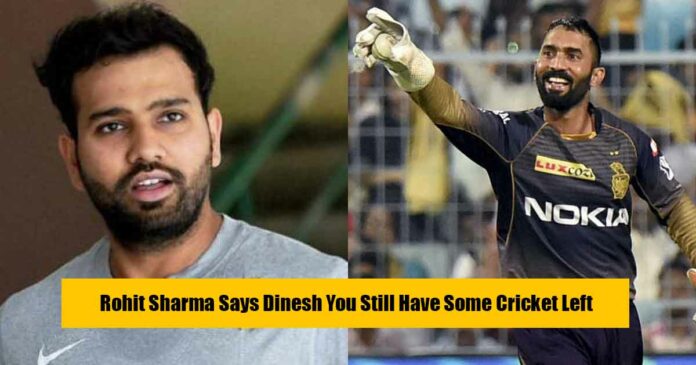 The stylish Tamil Nadu-born cricketer, Dinesh Karthik is enjoying his new life as a TV pundit in the commentary box along with fellow veterans such as Nasser Hussain, Kumar Sangakkara, and Sunil Gavaskar. He became an overnight fan favorite with the microphone. His relevant takes and quirky remarks on the game resonated with the audiences back home. This gave him an instant fan base in cricket commentary and called him a “breath of fresh air.”

The 36 years old former skipper of the IPL team Kolkata Knight Riders has impressed everyone while doing commentary in the World Test Championship final. It was played between India and New Zealand and the latter won it and became the first World Test Champion.

The Indian wicket-keeper and the batsman, Dinesh Karthik is quite active on social media. He keeps his followers abreast with the latest of his adventures. The Nidahas Trophy-winning hero shared some of his super cool pictures on Instagram on July 14 in which he can be seen posing in several different outfits. The caption on the post read, “Just me being me”.

Karthik’s comment section got overwhelmed within no time with netizens heaping praises on the wicketkeeper’s dapper-looking snaps. However, prolific Indian run-getter Ro-‘hit man’ Sharma did not miss the opportunity of reminding Karthik when he saw Karthik’s post that his days as a cricketer are not over yet. The Mumbai Indians captain wrote in one of the most liked comments on the post, “You still have some cricket left. FYI!”

Take a look at the screenshot of the comment of Rohit Sharma:

It came as a surprise that before even calling it a day over his magnificent career as an Indian cricketer, Dinesh Karthik took to the experts’ panel in the commentary box. Clearly, it is not a very popular decision that many active cricketers would think about. Perhaps, that’s exactly what makes Dinesh Karthik super special in the eyes of his fans.

However, Karthik didn’t waste any time expressing his acknowledgment while replying to Rohit Sharma. He responded, “rohitsharma45 don’t ever doubt that Sham.”

Take a look at the screenshot of the Dinesh Karthik’s response on the comment of Rohit Sharma:

It goes without saying that Karthik still has fire in his belly. He would be raring to exploit every little opportunity that comes his way to shine bright for India and instantly announce an amazing comeback in the senior ranks of the team. It is only fair to say that Karthik still has many a mile before hanging his boots besides packing a solid punch with his fashion statements.

As per the Cricket Addictor, while talking with India Today, Karthik said that he wants to “break that stereotype” where Indian cricketers take up commentary only after retirement. He said, “There are a lot of other sports like basketball and football where current players come on air when they are not playing. Even now during the Sri Lanka-England T20s, James Anderson was doing it for BBC in the next room. So it is a normal thing.” He continued, “It is only in India I think it is considered like that (post-retirement option). I obviously want to break that stereotype to an extent and I am happy to do this when I am not playing.”

His repertoire as a wicketkeeper-batsman with Kolkata Knight Riders who have had the experience of leading and winning an IPL title is a justification of the fact that he brings so much more to the table than just cricketing skills. Karthik is surely a thinking man’s player. Karthik was last seen in the now-postponed Indian Premier League (IPL) 2021 with so much cricket being played throughout the calendar year. The IPL asks for a lot while making an instant impact on the Selectors’ Committee. He couldn’t go too well as KKR lost five of their seven games, unfortunately. However, he must be eagerly waiting for redemption.

The Board of Control for Cricket in India (BCCI) has confirmed that it will organize the remaining matches of the tournament just before the T20 World Cup in UAE. That is when he’ll want to make the most of the remainder of the season. Especially, in the absence of regular KKR skipper Eoin Morgan. Morgan is unlikely to feature in the second leg of the competition. Most probably, Dinesh Karthik may be asked to lead the Kolkata side to show his class yet again.

As for the flamboyant batsman, ‘Sham’ aka Rohit aka Hit-man Sharma, he is bracing himself for India’s upcoming five-match Test series against hosts England. It is starting on August 4, 2021. Lately, the opener has been impressive in red-ball cricket and would also like to outshine himself against the Three Lions. However, in order to tackle the new Duke’s ball in difficult English conditions, India must prepare themselves well.