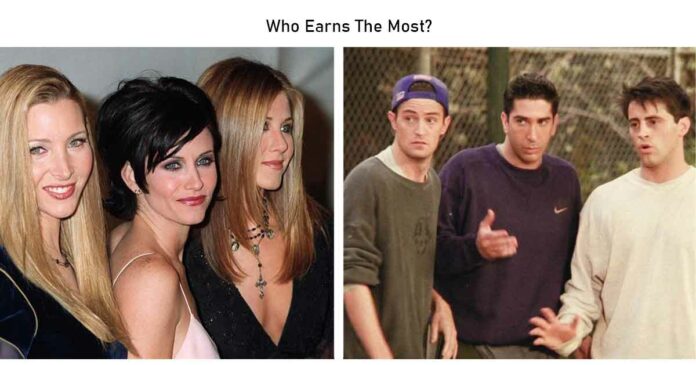 From the very beginning, FRIENDS has been one of the most popular TV Shows. Its marketability was always on the positive side. Day by day we see the fanbase expanding. All the six lead characters were equally applauded for their performances by the audience. From 1994-2004, they have had a beautiful journey. Each year, they could see the public admiring them more and more. Magical isn’t it? Well, I can assure you that those 10 years were remarkable and the most memorable for the six protagonists. If we talk financially, the year 2002 was special because that’s the year when the six friends clinched a solid ONE MILLION DOLLAR pay deal for each episode. I should for sure put forth the fact that back in time this was the only TV Show where the lead artists were paid a bomb.

Can you believe it how a single show turned out to be a fortune for each one of them? Their lives were totally different before this show and Friends proved to be a turning point in their career. After watching the show, people started recognizing their talent and offers started pouring in. I bet you all are wondering how their first paychecks of this show read like. Well then stop wondering because I am here to feed your ignited curiosity by giving you all the related statistics.

In the beginning, they were offered $22,500 for one episode. That isn’t any less money, is it? But of course, their salaries were meant to increase with their growing abilities. Moving on to the second season, a few of them got a hike up to $40,000 per episode. In season three they made $75,000 for an episode and in season four it went up to $85,000 per episode. If you think that’s a lot of money then you are forgetting a fact, that they were a part of the most successful TV Series in history. And they definitely deserved a lot more than $85,000! So as per their calibre and the huge inflow of money from previous episodes, for season five they received another huge paycheck of $100,000 for each episode.

But don’t be shocked so soon as this is just the inception of their journey towards a marvellous career. After being involved in such a great show their face value increased largely. They got offers for commercials, movies, new TV shows and more. They had to face interviews after interviews and things completely changed for them. The show was performing really good on TV and so while they started working for season 6, they again got an uplift of $125,000 for individual episodes. But things became super huge when their paycheck reached $750,000 for an episode in season 7 and 8.

The cast was performing amazingly because they had great chemistry among themselves. One of the reasons why the show was a hit was that the cast was enjoying their work and had a great bond. It’s a known fact that after season 1, David and Jennifer started to receive more pay than the rest of the cast. They could have continued it that way but they did something really amazing. They became united and approached the show creators to insist them on paying everyone equally. So from season 3, they always negotiated the salaries together and all six of them received the same amount. If that’s the level of trust and bond one has in a team, then the result will always be awesome.

We all know how season 7 and 8 only increased our appetite for more of Friends. And that’s exactly what happened back in time when it was on TV. Fans were crazy about the sitcom and the cast was nothing less than a superhero. It was at this juncture, that they reached the highest peak of their career and entered the ONE MILLION DOLLARS pay scale. And in those times, they were the highest-paid actors! Must say, they deserved it for sure.

If you think that’s all they have earned then sorry my friends, their job isn’t like ours where we cease to get salaries when we don’t work. Rather, they receive royalties for the rest of their life until the show is earning money. Actually, they hit the real jackpot from the show’s reruns. The paycheck they received while recording the show looked too small when compared with the paychecks received from reruns of the show. As per reports from the USA Today, each protagonist earns around $19-$20 million a year from royalties of the show.

If you think the cast is the real winner then think again! The real winner in terms of money seems to be Warner Bros, the show’s studio. Reports state that Warner Bros earns not less than $1 billion in a year as syndication revenue.

Money from Friends is huge because they could give us something that we can never forget. When someone creates something with all their emotions and efforts then results are ought to be great. Similar is the case of Friends.

The cast and Warner Bros may again hit a jackpot once they are out with the Friends Reunion. Every day the show is adding new fans and now the number of Fans eagerly waiting for the reunion is exponentially huge. So just imagine the numbers of viewers the Friends Reunion video can expect. Also, the amount of money they will generate from it might create a world record! We wish them all the best. You guys truly deserve it.