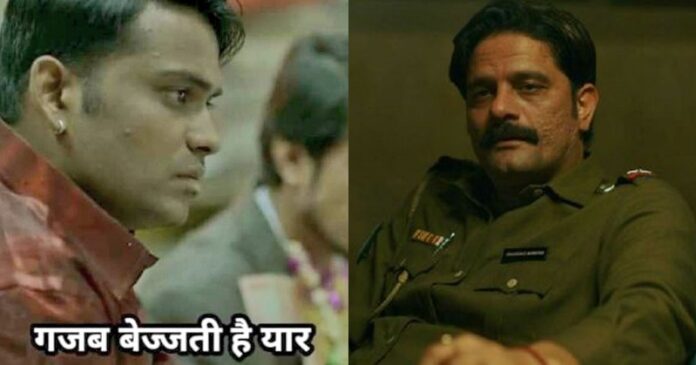 With thousands of memes being created almost every day, India has seen an exponential rise in the meme culture. Memes generally revolve around templates that are related through the use of popular references. However, the complete world came to a halt from a global pandemic after decades, and new normal was defined last year.

Some of the Indian viral meme templates inspired laughter, fun, and chuckles amidst all this chaos. It kept us entertained during these tough times and in general. From the Mirzapur’s motto of “Ye bhi theek hai” to the mystery of who was in “Rasoda”, netizens are feasting on these popular meme templates since forever.

Here, we have brought some of the viral meme templates that are picked by us after months of observing the meme culture. These Indian meme templates in Hindi are the ones that are eternal in terms of their usage. Let’s check them out:

This Indian meme template comes from the dialogue said by an actress and singer, Shehnaaz Gill in Big Boss 13. Later Yashraj Mukhate made a viral song out of it. This meme can be used on anything if it goes wrong.

This is a popular quote from the 2007 Indian comedy movie “Welcome”. In the movie, a municipal officer, Purushottam Bhan said this popular line to Uday Shetty aka Nana Patekar. This famous dialogue was said by Paresh Ganatra. If you want to scare or challenge someone, then this Indian meme is definitely for you.

This hilarious Indian meme template is from one of the web series on Netflix, “Mirzapur 2”. This dialogue was said by the actor, Priyanshu Painyuli who played the character of Robin in the series. This meme can surely be used for setting something or compromising on something.

When it comes to memes, the creators haven’t left the mythological shows as well. This hilarious Indian meme template has come from the TV Show, none other than “Ramayana”. The scene featuring Shri Rama and the younger brother of Ravana, Vibhishana has become crazy viral. It can be used when you want to hypothetically punish or kill someone for something.

The very popular Gormint Aunty got viral due to her famous dialogue “Ye Bik Gayi Hai Gormint”. It got widely circulated among social media users. Hundreds of memes were made using this one dialogue. The interview in which she mentioned this iconic statement was a full-fledged entertaining interview over her opinions of the government. However, the memes come lively on using this particular dialogue. Just paste it into any situation when you feel any decision by government authorities or anyone near you is wrong.

This musical Indian meme template came from Yashraj Mukhate’s viral video. This dialogue was taken from the Indian daily soap “Saath Nibhana Saathiya” where Kokilaben asks Rashi “Rasode me kaun tha”. It is a rap song that can be used in images, videos, and expressions as well.

Hera Pheri (2001) Baburao’s character in Hera Phera was legendary. He blessed the Bollywood fanatics with some of the funniest dialogues. Netizens pick up this Hera Pheri’s dialogue “Bilkul Ricks Nahi Lene Ka” and converted it into many viral memes. This hilarious Indian meme can surely be used when someone does not want to take the risk.

Aise Kaise is a meme that shows a still image of two dancers. Both of their hands represent a sarcastic questioning reaction to a particular opinion or statement formed on behalf of anybody. This Indian meme can be used when you disagree with someone statement or opinion.

Not only, Shri Rama and Vibhishana scenes, but Laxman Ji’s reaction while Shree Rama was eating Sabri Ber also got tremendously viral. This Indian meme template also comes from the mythological TV Show “Ramayana”. In this scene, Laxman Ji looks at Shree Rama with a disgusted look as he eats ber which is eaten by Sabri as well. This hilarious meme can be used for anything that needs a disgusted look.

This hilarious Indian meme template has come from the “Mirzapur 2” web series. This viral meme dialogue was said by the actor, Priyanshu Painyuli, who played the character of Robin in the series. This Indian meme can be used while appreciating something or somebody. Well, it can be used in a sarcastic tone as well.

Indian Prime Minister, Narendra Modi is one of the best prime ministers. However, while giving a speech to the nation during the lockdown, his one sentence stuck with the creators of the meme and became the origin of many hilarious ones. While facing any danger or fear, this meme can be used to tone it down.

This hilarious Indian meme template has come from the “TVF Rowdies” video. This was a fun take on the famous show “Roadies”. While making this video, the character playing Rannvijay says this popular dialogue. Later, hundreds of memes were created based on this particular dialogue. This amazing dialogue can be used while appreciating someone or even if you are saying swear words to somebody.

This meme was constructed through a video of a woman. She was filming herself while drinking tea and ask the viewers to drink tea as well. The way she asked “Hello Friends, Chai Peelo” received huge recognition. Several memes were circulated over social media of her reaction.

15. When Jethalal Is Upset With Babita Ji

“Taarak Mehta ka Ooltha Chashma” is one of the best comedy daily soaps in India. Amidst all the situations, the friendship between Jethalal and Babita Ji is quite unique and hilarious. Once, when Jethalal was upset with Babita Ji because of some misunderstanding, he gave a sad look. It later became a matter of memes. Now anyone is upset about anything, you can surely use this meme. 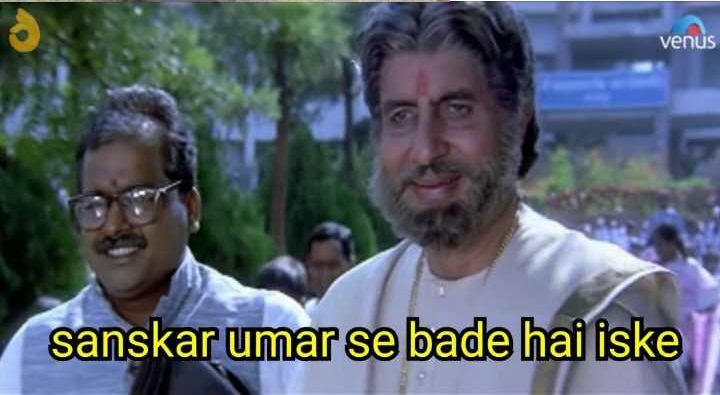 The amazing Indian meme template is from the Amitabh Bachchan starrer movie “Suryavansham”. This funny meme dialogue was said by Amitabh Bachchan himself while looking at his grandson. This Indian meme can surely be used to appreciate someone’s upbringing. However, it can also be used in a sarcastic tone as a comment.

“Pataal Lok” is counted as one of the best web series of Amazon Prime. In this series, Jaideep Ahlawat plays the lead role of Inspector Hathiram Ahlawat. In one scene, Inspector Hathiram is sitting sadly and that transformed into a viral meme. This funny Indian meme can be used to denote that someone is sad or upset.

This was a Bollywood Meme that received huge publicity due to its illogical dialogue. This dialogue was recited by an actress Daisy Shah in a flop movie “Race 3” starring Salman Khan. Her statement goes like “Our Business is our Business, None of your Business”. The dialogue was itself funny and then got targeted by the fellow creators. This Indian meme can be used to get someone off your back.

Which of these viral Indian meme templates did you find the funniest? Let us know in the comments below.