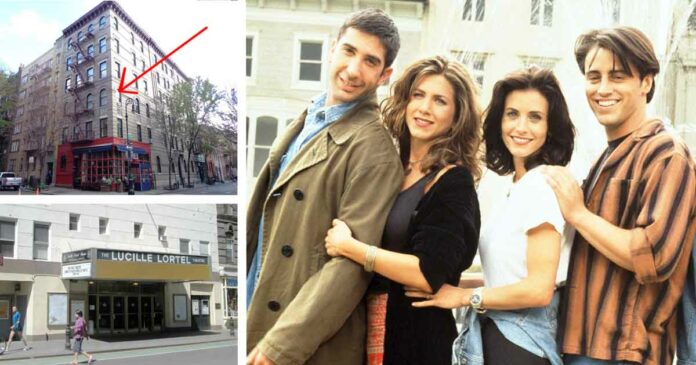 FRIENDS, the iconic show that was based on six best friends who struggle through young adulthood in the heart of Manhattan, reserved a major part of our lives for a complete decade. From the first episode premiered in 1994 to the last one in 2004, and is still a popular sitcom over a decade later.

After ten seasons, ‘The Last One’ signed off with Monica, Chandler, Joey, Rachel, Phoebe, and Ross gathering together in Monica’s apartment for the last time. Before leaving, they went to Central Perk to enjoy one last cup of coffee together.

Many of us expected that FRIENDS was the perfect representation of what it would be like to grow up. Sitting on the couch of a coffee shop and dancing around fountains in the middle of the night. Well, most of us know by now that adulthood is not that easy as they made it look and, no one told us life was gonna be this way!

Many FRIENDS fans do not know that the most iconic scenes of the show were not shot in those places or even New York at all. In fact, some of them never even really existed. So, here we listed some places from FRIENDS that its fans can visit today, and somewhere you could potentially run into the old cast, too. Go ahead and check out:

Monica’s Apartment tops our list because it was the foundation and true soul of the show. The true fans of the show know this home. Purple wall, blue kitchen cabinets, round kitchen table with mismatched pair of chairs, and Chandler and Joey’s apartment just across the hall. However, the interior existed just on set, you can visit the exterior of Monica’s apartment which is at 90 Bedford Street, at the corner of Grove Street in Greenwich Village.

Do you remember the episode titled “The One With Joey’s New Brain”? In this episode, Rachel and Phoebe find someone’s phone at Central perk. She then asks that person to pick it up from her apartment and she tells the stranger over the phone it’s at 5 Morton Street. Reportedly, it’s only a four-minute walk from where Monica, Rachel, Joey, and Chandler lived.

This is the famous fountain where all the six characters danced around during the opening of each episode of the show. It is the most iconic symbol of the show. However, it was just a prop on the set and not the actual fountain in New York. Reportedly, the inspiration behind the fountain was from The Pulitzer Fountain in Midtown West’s Grand Army Plaza and many FRIENDS fan visits there.

Warner Brothers teamed up with Eight O’Clock Coffee and surprised their fans with the real Central Perk on the 20th anniversary of FRIENDS’ debut episode. It is located in the SoHo neighborhood of Manhattan at 199 Lafayette Street. According to Time, they used the iconic orange sofa in the cafe as well as made the same storefront. This all set up was a temporary idea but it became so hit that in 2018, Warner Brothers secured it permanently that also has the logo from the show.

Do you remember that memorable scene, where Monica was stung by a jellyfish at the beach and Chandler urinates on it to relieve the pain? That famous episode “The One With The Jellyfish” was filmed at Leo Carrillo State Park on the coast of Southern California. FRIENDS fans might get a chance to meet the stars of the show there.

The American Museum Of Natural History

These are the few must-go places for a FREINDS lover. Let us know in the comment section if you have visited them before.