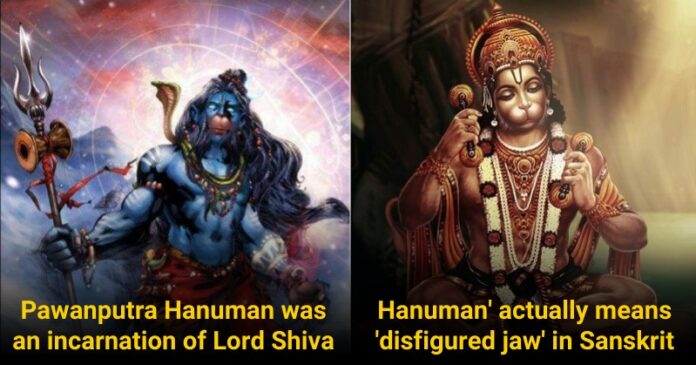 Lord Hanuman is probably one of the most celebrated in Hindu Mythology. He is worshipped by many to gain courage in their lives. Even though we all know many things about Lord Hanuman, there are still few things we don’t know about him and his life.

Scroll down to look into it:

1. Hanuman Was An Incarnation Of Lord Shiva

A beautiful Apsara, Anjana was cursed by a sage in the court of Lord Brahma that her face would transform into a monkey whenever she fell in love. She took birth on earth and Lord Brahma tried to help her. Anjana fell in love with the monkey king, Kesari, and married him. Being a true devotee of Shiva, she continued her Tapasya. Shiva got impressed and asked her to wish something. She wished him to be her son to get freedom from the curse.

A few days later, a Yagna was performed by King Dasrath in which the sage gave him kheer to feed all his wives. A portion of kheer was snatched from Kaushalya and flew all the way to Anjana, where she was meditating. On the signal of Shiva, Lord Vayu kept the kheer in Anjana’s hand which she ate thinking that it is the prasad of Lord Shiva. Later, she gave birth to Lord Shiva’s incarnation, Hanuman. He is the son of Lord of Winds and also called “Pawan Putra Hanuman”.

Lord Hanuman was devoted to Lord Rama. According to an incident, when Sita was putting sindoor on her forehead, Hanuman asked the reason behind it. Sita then explained that it is the symbol of her love and respect towards Lord Rama since she is his wife. After knowing this, Hanuman covered his whole body in sindoor to show his love and respect for Lord Rama. Rama got impressed and granted a boon to the Hanuman that whoever will worship Hanuman in the future will live a difficulty-free life.

‘Hanu’ means ‘Jaw’ and ‘Man’ means ‘Disfigured’ in Sanskrit. When Lord Hanuman was a kid, took the sun as a ripened mango and went to trace it up in the sky. Then Lord Indra had used his vajra and threw Hanuman straight on the Earth. It damaged his jaw forever.

4. Lord Hanuman Had A Son – Makardhwaja Even When He Was A Brahmachari

After burning the entire Lanka, Hanuman dipped in the sea to cool off his body. It is believed that at that time a fish swallowed his sweat and conceived Makardhwaja. Makardhwaja was born to a fish of the same name.

5. Lord Ram Once Issued A Death Sentence To Lord Hanuman

After Lord Ram became the King, Narada asked Hanuman to greet all the sages except Vishwamitra when the court was adjourned. Hanuman did as asked but it did not affect Vishwamitra. Then Narada instigated Vishwamitra which made him furious. He went to Lord Ram and asked him to punish Hanuman by giving a death sentence. Since Vishwamitra was Lord Ram’s guru, he cannot disobey his command.

The next day, Hanuman was to be executed in the field with arrows. But it failed because Hanuman keeps chanting Ram. Then Lord Ram used Brahmastra, but to the surprise of all, it did not affect Hanuman at all. After seeing this, Narada went to Vishwamitra and admitted his mistake which stopped the ordeal.

6. Hanuman Also Created His Version Of The Ramayan

7. Lord Bhima And Lord Hanuman Were Both Brothers

Bhima was also the son of the Lord of the Winds, Vayu. One day, Bhima was searching for a flower his wife wanted. While searching, he saw a monkey lying on the floor with his tail crossing the path. Bhima asked the monkey to move his tail, but the monkey didn’t and instead asked him to move it. Bhima tried all his strength in anger but couldn’t lift it. Finally, he realized that it was not an ordinary monkey. It was Hanuman and he was lying there to reduce the arrogance of Bhima.

8. Lord Hanuman Barred Yama From Claiming Lord Ram When His Time Of Death Was At Hand

When Lord Rama decided to leave his earthly existence, he knew that Hanuman would not let him do so. So, he asked Hanuman to find his ring which had disappeared in the Patal Loka. Hanuman went to find the ring and there met the king of spirits. He told Hanuman that this signifies that the time of Lord Ram’s avatar end had come.

Once Sita gave Hanuman a beautiful pearl necklace as a gift. But by saying that he doesn’t accept anything that is devoid of Ram’s name, he politely declined it. And to prove that, he ripped off his chest and revealed the image of Ram and Sita in his heart.

10. Lord Hanuman Has 108 Names In The Sanskrit Language

5 Ways How To Publish A Book For Free

How To Write A Book Report: The Ultimate Guide

8 Best Books To Read For Beginners