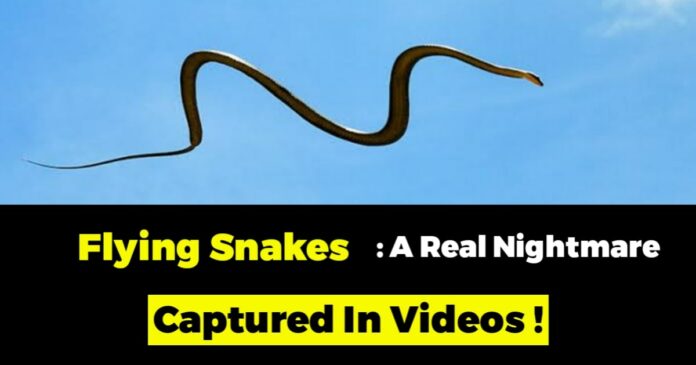 Snakes are a nightmare for many people, we can’t blame those people because snakes aren’t so friendly either; be it in looks or nature!

Snakes are slippery and limbless creatures which can slide through anything! Imagine you are chilling on a beautiful evening in your lawn, and suddenly you notice something sliding up the stairs of your house and going in! That would be it, you will dare not get inside your own home unless that thing is out.

In another case, imagine you have to pee really hard, and you are heading towards a bathroom. Just when you were about to touch the bathroom gate, suddenly your eyes meet a thing on the ground that’s moving towards the bathroom door and finally slipping in through the corner! Will you have the guts to go in and pee? Or would you prefer peeing in your pants?

That is the panic a snake creates in our minds. If we say the same creature that you were scared of while it was sliding on the ground, has now got wings to Fly!

Many may suffer from panic attack by the mere thought of this! Imagine a scene where you are taking a walk in some park, and out of nowhere, a snake falls on you from the sky! Do you need anything else for a cardiac arrest at that moment?

This nightmare can come true if you are in Southeast Asia. Well, for your information, India comes in the Southeast Asia region as well! So don’t feel you are away from this dangerous reality.

The flying snakes have a scientific name, Chrysopelea, which sounds really classy, isn’t it? If you are imagining, how can a snake Fly, whether they really have wings or is it just a hoax? Then let me clarify that these reptiles are actually gliders! Gliders need not have wings, they make use of free fall and their unique body shape to generate lift and stay in the sky.

So basically, they jump from tall trees and flatten their body to make use of the air to reach their destination. Imagine a paraglider in air, these snakes make use of a similar technique to fly. You will be surprised to know that these snakes can fly up to a distance as great as 100 m.

Watch the videos captured to see for yourself how these snakes look like while they are in the sky. If you are scared of snakes, then get ready to have some sleepless nights and insecure walks in parks!

Here in this video, the scientists have tried to figure out how these snakes Fly!

Researchers at Virginia Tech used high-speed motion capture to study how one snake species can leap several meters at a time https://t.co/PTg8GRooh1 pic.twitter.com/TkNAp7XJey

An in detail video with explanation of how these snakes Fly.

Well, these snakes were sighted in India as well. Gujarat, Coimbatore and many more such sightings are reported till date. People even smuggle these snakes and a man in Odisha was caught with a Flying snake hidden at his residence.

Here’s the video of a snake once sighted in Tamil Nadu:

Well, for snake freaks these MEMEs will be so relatable right now!

That’s all folks! From now on, stay safe and look up at the sky while wandering about under the trees, you never know what’s up there!