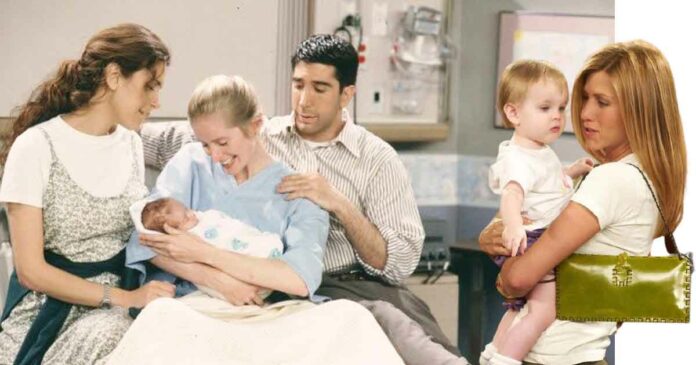 The popular sitcom FRIENDS has many famous storylines that include the Chandler and Monica secret turned true love relationship, Rachel and Ross’s “we were on a break” rollercoaster, Phoebe’s choice between David and Mike, and Joey’s constantly changing acting career.

There are many storylines in the show that were suspended later on for many reasons. But some plots have fans thinking “what could have been happened” if the show included some of those storylines. Let’s check out:

The Richard And Monica Story

Fans will never forget the adorable proposal when Monica got down on one knee and proposed to Chandler and they both were crying. But it is fascinating to see Monica running off to Richard to tell she wasn’t too sure. After all, they shared some serious chemistry. It would have been interesting if Monica had experienced the moment of doubt before proposing to Chandler that she lied about. Fans do agree that this storyline could have gone further, but not enough to replace Chandler.

The Joey And Rachel Story

Well, fans didn’t like this plot that is why it never extended, but this couple could have gone further. Joey revealed his love for Rachel that wasn’t easy for him to do. It was weird to see an abrupt stop in their storyline as it did. This would have opened many possibilities in the show.

The Possible Joey And Phoebe Story

These two have experienced many cute moments, aside from the kisses they shared. When Phoebe pretended to be her twin sister, Ursula, to give Joey a proper breakup, he figured out the truth by himself, showing fans how much they knew each other. The duo shared such great chemistry that fans still think that they should have dated each other.

This storyline was short-lived but never totally abandoned. When Ross married Emily, he was seriously exploring the idea of moving in with Emily because their wedding took place in England. If Ross wanted to be in Ben’s life, there was a possibility to bring Carol and Ben to England. Unfortunately, it never happened because Ross and Emily’s story didn’t last long.

The Story Of How Rachel And Monica Lost Touch

Rachel and Monica shared a great friendship while growing up. However, they drifted apart after high school until Rachel walked in a wedding dress into Central Perk. It would have been interesting to see how their friendship just faded away after high school. It could have shown fans a more realistic view of friendships.

Rachel And Emma Going To Paris

Rachel announced that she got a new job in Paris before the show ended and she would have to shift there with Emma. It would be fascinating for the fans to see her managing herself and Emma in a completely different country. However, it was adorable that Rachel got off the plane and came back to Ross.

The Rachel And Gunther Story

You might not know that Gunther and Rachel were supposed to move in together. We don’t know how this would have happened but as Gunther had a big crush on Rachel could have turned into a relationship between the two. With this storyline, fans might have got a sneak peek at the darker side of Gunther. However, the notion is still intriguing, especially if it got in the middle of the Rachel and Ross story.

Chandler And Rachel’s Past

True fans will remember the flashbacks of Chandler and Rachel’s storyline. Apparently, Chandler kissed Rachel the same night that Ross kissed his sister accidentally. Clearly, Chandler had something for Rachel and Rachel did too. In the episode with “The One With The Flashback”, Rachel was daydreaming about having a steamy session with Chandler. These moments left fans thinking how they would be if they had dated.

The Monica And Joey Story

After Monica and Chandler found their happily-ever-after together, it was revealed that Monica was actually looking for Joey to hookup in Ross and Emily’s wedding. However, she went for Chandler instead because he was already there. Later we saw that Monica didn’t just settle for Chandler when they fell in love and got married. But it would have been intriguing to see what would have happened if Joey was there at that moment.