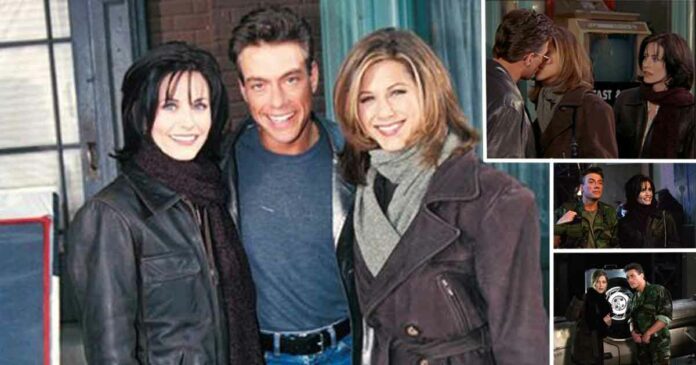 American Sitcom FRIENDS is one of the most popular and highly loved shows worldwide. It has been almost twenty-five years since the episode, “The One After the Superbowl” premiered but the talks haven’t dampened yet. Many actors made guest appearances throughout the ten seasons and one name among them was Jean-Claude Van Damme who was featured in the Superbowl episode. It is often said that he didn’t leave the best impression on the set of FRIENDS while working with Courteney Cox and Jennifer Aniston.

The special hour-long episode “The One After the Superbowl” features Brooke Sheilds, Julia Roberts, Jean-Claude Van Damme, Chris Isaak, Dan Castellaneta, and Fred Willard as special guests. But, it was Van Damme who caused few issues on the set. From unpunctuality to making two of the stars uncomfortable.

He portrayed a version of himself in the episode “The One After the Superbowl: Part 2”, where Rachel and Monica meet Van Damme while he was shooting for a movie. Monica had a crush on him so Rachel approached him to talk on behalf of Monica. Later, both the girls ended up chasing up for the attention of the action hero. Despite Phoebe doing her best to point out that they were being ridiculous, they spend most of the episode placing Van Damme on a pedestal. It’s not until the star suggests a 3esome, they both decide to dump him.

On account of FRIENDS’ 25th anniversary, the episode’s director disclosed that Van Damme didn’t exactly cover himself in glory during his short time on the show. He was unprofessional and quite difficult to manage. In this multi-starrer episode, the crew praised all of the guest stars except one. Talking with The Hollywood Reporter, director of the show, Michael Lembeck remembered an incident where both Aniston and Cox were uncomfortable because of Van Damme.

He said, “He’s unprepared and arrogant! But this is the story I want to share: We shoot him and Jennifer first. Then she walks over to me and says, “Lem, Lem, would you do me a favor and ask him not to put his tongue in my mouth when he’s ki*sing me?” I tell him everything is great but it’s a tight shot so maybe let’s not do that. He continued, “Then we’re shooting a scene later with Courteney. Here comes Courteney walking toward me and saying, “Lem, can you please tell him not to put his tongue in my mouth?” I couldn’t believe it! I had to tell him again, but a little firmer.”

However, it is worth noting that neither any of the cast members nor Van Damme comments on the incident that Lembeck describes. Also, those bonus scenes were not aired on the original broadcast. There is a possibility that Lembeck is remembering the story differently, but if it did happen in the way that the director mentions, it serves as a clear example of how power dynamics can overpower any interaction.

Warren Littlefield said, “Jean-Claude Van Damme may have fallen into the category of who’s more difficult to work with, him or the monkey?” Kevin remembered that the actor arrived three or four hours late to the set. And when Kevin tried to talk to him regarding the scene, the actor said, “No! First, I memorize lines. Then you give me the feeling.”

Few writers of the show commented on the Van Damme storyline as a whole. Writer Michael Borokow said, “He’s not a comedy star, and I think it showed. On the other hand, we didn’t need him to be funny. We needed a big Hollywood star that the girls would fight over and he did that great.” And writer Alexa Junge said, “I didn’t like that storyline. I was upset that my Monica and Rachel sold each other out romantically.”

The guest appearance of Jean-Claude Van Damme on FRIENDS is a reminder that there can be many examples where performers intentionally and unintentionally cross the line. The fact that these incidents or stories are rarely made public doesn’t mean they’re not happening.

Now leaving besides all the negativity, let’s get caught up in something good. We obviously don’t wish to have negativity filled in the air whenever the name FRIENDS is called. So let’s get indulged in some ki$ses that were never awkward. Rather they looked the best and I guess the cast enjoyed it too (or not maybe)! Also, don’t get bumped if we mention a few odd ones because they were really fun to watch!

Most of us did not like the Joey and Rachel thing but you can’t deny that the first time their lips met, it was really magical. The heat they had and the passion in their eyes was all so wonderful. You can’t help but notice the sweetest gesture of Joey when he slides Rachel’s hair before getting busy again. Their relationship did not work out for long but the initial days were so like a college couple love. They had to hide their thing from Ross, so sneaking out and maintaining boundaries in their love was all so childish but cute.

You can never forget this scene if you have watched FRIENDS even casually and managed to reach the part here. The Rachel Ross thing was never stable and they were often seen on and off.

The flashback scenes in the show were funny and the clip that they were watching in this episode was funny for sure but dramatic as well. Ross and Rachel’s looks were hilarious at some point but the best thing we saw in there was Ross’s love for Rachel. The Ross and Rachel story had deep roots and Phoebe said it right that Rachel was his lobster. In the end, it turned out to be true that they were indeed lobsters!

The moment Rachel realizes that there can be no one else in the world who can love her more than Ross is when she gets up from her seat. She is already emotional by then and we could all feel those emotions when Rachel approached Ross to ki$s her. We could see and feel emotions like never before, Ross waited quite a long and his patience alone is enough to make someone fall in love. The scene was so emotional that Monica couldn’t help but shed a tear of happiness in the background. Maybe the energy was real, maybe they were too indulged in their characters and that is the reason why we too could feel it while watching.

Chandler & Joey At The New Year

The best ki$s list is always incomplete if we don’t include this one because the bromance we see here is exceptional! It was surely not the most comfortable scene for the actors but besides Joey and Chandler, everyone else enjoyed it in the room. We can hear others laughing out loud in the blooper clip and this is invaluable. The awkwardness between the two could be felt and the way they react afterward is just so funny. Probably this is why their bromance was so strong because they knew each other in and out and at times had quite a bit of romance (just kidding).

Anyways, the uncomfortable ki$s between the two is surely epic and will be remembered forever!

Now you say to us, which one you think was the best one in FRIENDS. We know the Jean-Claude story was quite upsetting for all of us and is never expected at the level they were working. So instead of fixating on that and spoiling FRIENDS memories, let’s keep the good memories in the frontline and keep rewatching FRIENDS. Now, which season are you in buddy?