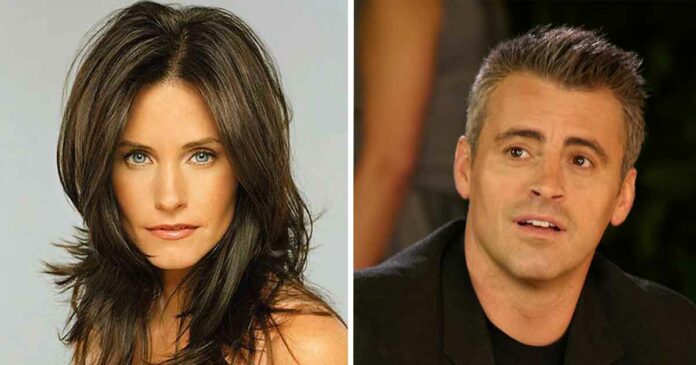 #1 Days Of Our Lives

We know Joey plays Dr Drake Ramoray in the fictional ‘Days Of Our Lives’ but did you know the series exists in real life too. And even shocking is the fact that Jennifer Aniston’s real-life father, John Aniston plays the role of Victor Kiriakis in the real-life series.

In the pilot episode of the show, we saw Monica saying the first lines of the series which were, “There’s nothing to tell, just some guy I work with.” And that is how the best show in the universe came in.

At the end of the show, surprisingly it was Chandler who said the last lines of the show when he uses his wit to create a line that was not even in the script. The line in the end, “Sure, where?” made us laugh even in those last moments and all credit goes to Matthew for this impromptu. So it’s really great that the Bings got to say the last and first lines in the show.

On the day of the audition, Matt LeBlanc appeared with a large elite cut on his nose that resulted from a tumble and land on the edge of a toilet seat. Strange!

If you are a fan you might have seen the episodes a lot many times already. But did you ever notice the artwork at Central Perk? The background of the coffee house is something you should notice the next time you watch the show. You might not believe but the often ignored artwork at the background in Central Perk is changed every three episodes. Yes, the next time you try to notice them and try to spot the changes in every 3 episodes.

You know David in the show as the character Ross but what if I tell you he had more involvement than you know. David has directed 10 episodes in the whole series and it’s not a shocker because even after FRIENDS he directed several other projects in his career.

The theme song “I’ll Be There For You” is something every fan is emotional about. True fans have watched the show several times and it rarely happens that they skip the theme song unless they are binge-watching the show. So on an average, a fan has heard the song not less than 236 times(Number of episodes in FRIENDS). And it’s amazing to know that the song is co-written by the creators of the show, Marta Kauffman and David Crane.

Monica and Phoebe are the only characters on the show who haven’t kissed each other on the show. The count includes the flashback episodes too.

#8 Refrigerators In The Apartment

The refrigerators we see in Monica and Joey’s Apartment actually worked. The one at Monica’s was filled with water and other drinks for the cast and the crew while the one at Joey’s was usually empty unless it was to be shown in an episode.

#9 Why Gunther Came In

#10 They All Stayed At Same Place

In the last episode, it’s mentioned that they all lived in Monica’s apartment at some time or the other. But maybe they forgot the fact that all six of them have stayed in Joey’s apartment as well. They were indeed true friends!

Richard Burke played by Tom Selleck in FRIENDS received huge encouragement from the live audience. He received standing ovations at several instances and the cheering was so intense that the creators had to reshoot the scenes without the audience.

#12 Phoebe Based On Jennifer

It’s strange to know that Lisa Kudrow based her character Phoebe upon her co-star Jennifer Aniston. It’s no surprise that Jennifer has an interest in spiritual subjects and that’s what Lisa tried to put into her character.

After the show ended, the cast members were gifted with a piece of the sidewalk from the outside of Central Perk as a keepsake. Also, recently it was disclosed by Lisa in an interview that Matthew sneaked out a cookie-watch from the sets of FRIENDS for her.