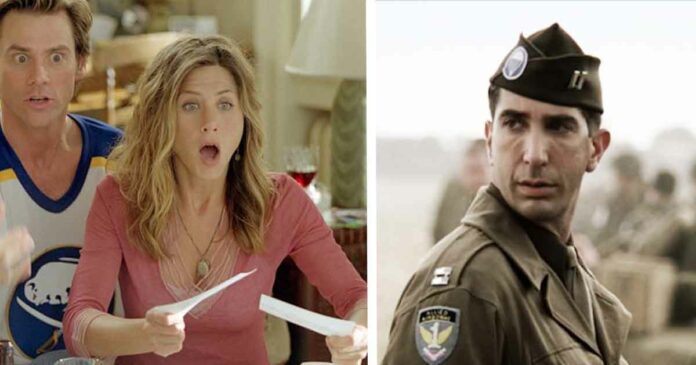 FRIENDS became a television phenomenon after premiering in 1994. Even though the entire cast has worked in TV and movies before, this show worked as a catalyst. It made them megastars immediately. It helped them to branch out into movies which they usually shoot during the show’s summer break.

However, some of the cast members found some success, and others didn’t. Only Jennifer Aniston found success in movies till the FRIENDS ended, while others either stepped away from the spotlight or tried television again. So, here is the list of movies that the cast of FREINDS did in between 10 seasons:

After trying in rom-com career in the 90s, David Schwimmer starred in the landmark miniseries, “Band of Brothers” in 2001 produced by Steven Spielberg and Tom Hanks. This mini-series revolved around the infantry regiment, as they navigate through training and then combat during World War II. David appeared in three episodes as Captain Sobel, but it was singled out for being miscast. Later, David focused on directing films and theatre.

Matt LeBlanc didn’t face too much success in the side projects during FRIENDS. However, he was quite good in the role in “Lost In Space”, which was alongside Gary Oldman and William Hurt. In this, he was an action star that was very different from the character Joey. “Lost in Space” dethroned Titanic’s number after three months at the box office.

Just like in FRIENDS, Jennifer’s first movie, “Picture Perfect” was a rom-com movie. This movie did modest success in the box office and got mixed reviews. Jay Mohr, the actor in the movie said that it was a terrible experience because Jennifer disagreed with his casting.

Matthew Perry didn’t receive too much success in movies, but “The Whole Nine Yards” was one of his movies that received modest box-office success. This movie was a black comedy where Chandler was a dentist who came to know that his neighbor (Bruce Willis) is a hitman. They also attempted to make a sequel “The Whole Ten Yards”, but it flopped.

Lisa Kudrow went all into an Indie movie with “The Opposite Of Sex”. In the movie, Lisa is the sister of 16-year-old Christina Ricci who is pregnant and seduces her gay half-brother’s boyfriend. After that, they run away and Lisa must track them down. This movie was critically received huge success. Lisa got nominated for Best Supporting Actress at the Independent Spirit Awards and the New York Film Critics Circle Awards, she won Best Supporting Actress.

Jennifer finally did a blockbuster movie, “Bruce Almighty” after many modest box-office successes and independent movies. Jennifer plays the girlfriend of a frustrated reporter, Bruce, who briefly gets to see what it’s like to be God. This movie was a humongous box-office success, making it Jennifer’s highest-grossing film to date.

Jennifer went more indie in 1999 and starred in the cult classic “Office Space”. This movie was about office workers which was a satirical black comedy. Jennifer played a restaurant waitress in the movie who shares the lead’s hatred of work-life, resulting to begin a relationship. This movie failed commercially but became a cult classic.

“Romy And Michelle’s High School Reunion” is a cult classic movie that starred Lisa Kudrow. This movie revolves around two blondes who try to look cool at their high school reunion to impress their classmates. This movie achieved success critically making Lisa Kudrow in headlines.

After starring in low-budget movies, Jennifer went with Sundance hit “The Good Girl”. Jennifer plays a depressed cashier but an affair with the new troubled new co-worker adds excitement to her life. This was a critically acclaimed movie for which Jennifer was nominated for an Independent Spirit Award.

Cox didn’t make many movies during FRIENDS but she gave the biggest hit of them all. She was starred in the horror movie “Scream” followed by sequels, directed by the horror legend, Wes Craven. It was one of the most acclaimed horror franchises critically and commercially.