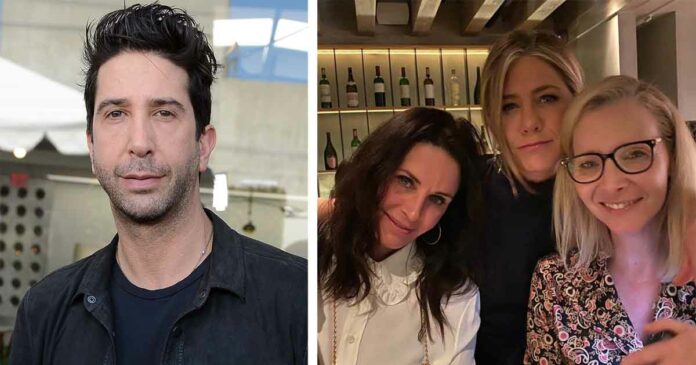 Going back in time, just 26 years ago, the first episode of the largely popular TV Show, FRIENDS came in with a new type of reality into the mainstream. And right from the very first episode, we got FRIENDS’ statement of intent. They put all their cards on the table that this is not going to be the show about “traditional family values”.

Barely three minutes into the pilot episode of FRIENDS, the audience gets introduced to Rachel – as she bursts through the doors of the now-famous Central Perk in her wedding dress. She hotfooted it straight from the altar, leaving behind her Orthodontist fiance Barry.

Later in the episode, we saw Rachel sit with her high-school friend Monica on her kitchen table while the others try to encourage her to cut the credit cards for which her father was paying bills. It might sound lame but if you observe deeply, it is a symbolic gesture of cutting ties to her family while she starts her new life in the city with her friends, Monica, Chandler, Ross, Phoebe, and Joey. “Welcome to the real world. It sucks. You are going to love it” – these were the words Monica used to welcome Rachel to a group where she becomes an inseparable part. And for decades after that, they have always graced our screens.

In the first episode of FRIENDS, which touched the TV Screens 26 years ago, the audience gets a taste of what exactly the show would be about. Parents were out of the picture. Marriage was abandoned. The people they rely on were just each other. They were six slightly confused twenty-somethings, uncovering their way through jobs, relationships, and life, in general. Not sure where they were heading, but not too stressed up about it either.

Before FRIENDS though, the TV was all about families, families, and families. Enough to make you tired. Even when you were playing with the formula, if a network wanted surefire sitcom hits, they set the show in a family. FRIENDS defied all that to make one of the few sitcom hits without the usual family unit. It proposed the radical view that the new family of the 20th century was not made of relatives, but of friends. The people just like you who are figuring out what they want out of life. This created a new tradition, where friends would go on to inspire the whole new generation of shows by saying “I’ll be there for you..”

The pitch of Kauffman and Crane read – “It’s about friendship because when you are single and alone in the city, your friends are your family.” It’s made clear in early episodes of FRIENDS just why the six characters need each other. In the first few episodes, Rachel discovers her parents are getting divorced and Phoebe talks about her mother’s suicide. The Geller parents come to visit and constantly put down Monica. Later in the series, Chandler reveals that his parents announced their divorce during Thanksgiving dinner, which is why he doesn’t eat Thanksgiving food and Joey discovers that his father is cheating on her mother.

It’s in that first Thanksgiving episode, where their individual plans are foiled and they all end up eating grilled cheese together at Monica and Rachel’s apartment, it becomes clear that families can be messy and unreliable. But in situations like those, it’s your friends you can rely upon. Joey says, “This was nobody’s first choice.” And yet, they always spent the holiday together.

The characters were in their Twenty-somethings, a stage in life where they are too old to stay with their real families, also too young to make a family of their own. That is where the friends came in to fill the gap – in real life and on-screen. The six characters on FRIENDS were always there for each other, even as some pairings moved from platonic to romantic – and back again (but were they on a break?).

The show FRIENDS, pushed the boundaries of what family could look like. It was traditional values that ultimately won out. In 2004’s finale, Rachel sacrifices her career to return to Ross and raise their daughter, Emma together. Monica and Chandler move to the suburbs after they get the babies they desperately longed for. Phoebe has married Mike. Only Joey left single, probably for the spin-off sitcom, Joey.

Ultimately the FRIENDS ended and changed the way we enjoy our TV shows. Do you agree? Share your views in the comment section.