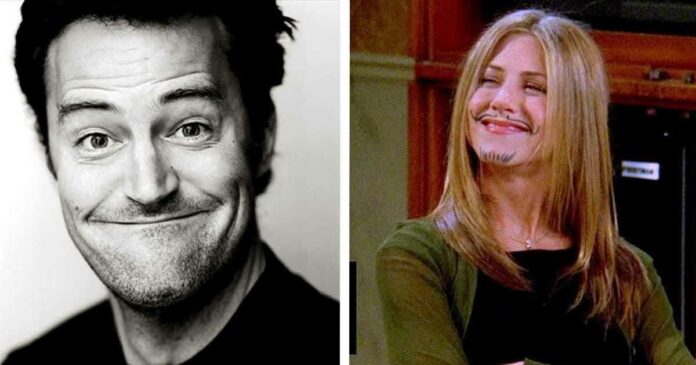 NBC’s hit sitcom FRIENDS, which managed to stay on the binge-watch list for over a decade now is full of hilarious moments. No matter how many times you have watched the gang, they will still crack you up. From “Ross’ Pivot” to “Rachel’s Trifle”, from “Chandler’s Third Nipple” to “Joey’s Moo Point”, the show never fails to burst you into laughter.

Here is the list of top 10 jokes from FRIENDS which we think, will never get old:

This is one of the most hilarious episodes where Ross and Rachel get back together after 4 months. Their rebound was short-lived because Ross did not read the whole letter by Rachel and unknowingly took responsibility for everything that went wrong in their relationship. However, as soon as they both realized what has happened, they were back to the “We Were On A Break” fight but this time with a little more insults for each other.

In the same episode, Rachel takes the last word in their fight when she cracks open one of Ross’ secret by shouting, “Just so you know, it’s NOT that common, it DOESN’T happen to every guy and it IS a big deal!”

This dialogue took fans by confusion for years but recently the writers of the show disclosed their intent behind the dialogue. To know why Rachel used those words and what does that mean click here.

When Rachel and Phoebe enroll in self-defense classes, Ross tries to sabotage their confidence by explaining that they won’t be completely safe unless they learn the concept of Unagi! Well, the girls made fun of him by telling him it was some kind of Sushi, but Ross didn’t give up. He tried to scare them on several occasions. However, the girls end up winning the battle. But the most hilarious part is when Ross went to their self-defense teacher and asked him to attack the two girls together. On hearing that the teacher assumed he was some kind of weirdo who wants to attack women. Poor Ross!

In this episode, Ross was going through some rage issues because of his failed marriages. And it all comes down to a line when someone at work stole his sandwich. It was not just another sandwich but the special thanksgiving leftover sandwich with Monica’s secret moist maker in it, which by the way made it amazing. Ross loses his calm when he came to know that his boss ate a bit and most of it was thrown away. He screamed so loud that even the pigeons outside trembled in fear.

Phoebe set up a date for Joey with her friend but after the first meet, Joey was not interested in seeing her anymore. And the reason was hilarious for most people as he ditched her because she took some fries from his plate. When Phoebe tries to narrate this to Rachel, she confirms by saying that he doesn’t even give a grape to Emma from his plate, so leave alone a fully grown girl!

Phoebe was dumbstruck by the news. But again we were amused and laughing when Joey shouted, “Joey doesn’t share food!” And that’s how a dialogue to be remembered forever was born! Thanks to Joey that now every foodie+Friends Fan can save their plate with ease by quoting the same line.

Ross’ Trip To The Sun

In this episode, Ross gets jealous of Monica’s new bronze skin which she got from the tan spray. After staring at her sister’s legs like a pervert, he decided to try it himself. But the tan process came out to be a little tricky to him, which resulted in multiple sprays on his front and none on his back.

It’s not that Ross gave up on his first attempt, he gave it another shot but unfortunately, the rectification turned out to be a disaster. Chandler as expected blurts out a hilarious comment on seeing Ross. And things get funnier when Ross shows the difference in skin color to Chandler and Monica. Such scenes make us wonder, why wrong things happen to Ross always! Again. poor Ross!

It’s surprising to see Joey act smart because we love his cute dumbness. When we think of Joey, things like Joey’s apple come to one’s mind. But expecting something that is logical seems off the table!

The moment he gave his arguments for the Moo Point, not just Rachel but everyone was taken by surprise because it was something that made sense. So you might want to think that Joey was a genius but never showed it in public. Nothing wrong with imagining, after all, it’s only possible in our imagination.

Rachel’s Inside Out Cat

Rachel did pretty hasty things throughout the series but the most striking was when she bought a cat. And not just a regular cat, but an inside out cat! Soon after getting a few scratches and some spooky calls from the cat, she finally realized she needed to get rid of the cat.

It’s funny and sad that she actually found someone to sell the cat. Poor Gunther had to shed double the money to buy the cat thinking it might give her a chance to see Rachel every day. But he was unaware of the fact and that’s what makes us sad. Also, it’s funny that he thought it was some kind of a snake.

The series of events in this episode is unforgettable. While watching, all the confusion and Joey’s reactions will make your stomach ache with laughter.

Remember the episode where Ross tried a new pair of leather pants for his date? Well, the date was a disaster as he felt hot in those leather pants and decided to take them off in the washroom. But to his surprise, he was stuck and couldn’t put it back on. He called Joey for help but that was a wrong call! So we know how things ended up for Ross.

And all this while, Chandler, the king of sarcasm was mute because of his New Year resolution that forced him to not make fun of his friends. Chandler was dying from inside to comment on those tight pants but his lips were sealed. However, in the end, the Sarcasm King couldn’t hold it anymore and realized losing money is better than losing his peace of mind. And for Ross, he felt amazing at the end when his son, Ben drew him as a cowboy.

Rachel was never a great cook as we know from several occasions on the show. But there’s one notable moment when she left no doubts was when she made the trifle for thanksgiving.

Unfortunately, pages of the cookbook got stuck together and the thing that she made was half trifle and half shepherd pie. Judging from everyone’s reactions, the result was a disaster and everybody tried to find a way to get rid of it. But there was one person who was an exception and that was the fun part! Joey actually enjoyed eating that weird dish and his reply regarding the so-called pie was exceptional.

Hope you enjoyed our top 10 picks from the show. But I guess it, you have your own favorite jokes too, so why not share it in the comments and spread more laughter!