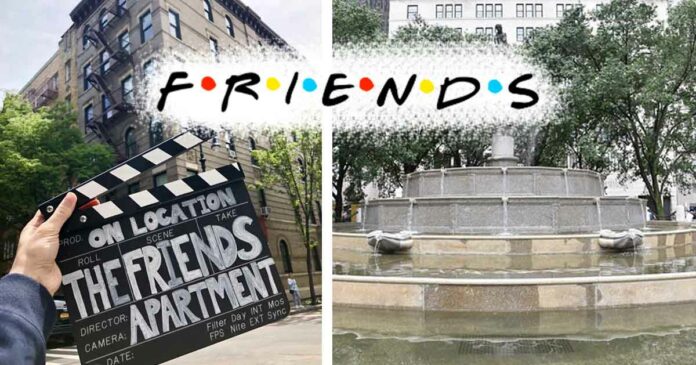 The iconic show, FRIENDS followed six best friends through young adulthood in the heart of Manhattan. Many of us thought that FRIENDS was the perfect representation of what it would be like to grow up, but most of us have found out by now that adulthood isn’t as easy as they made it seem. Sorry to burst your bubble but many of us don’t realize that our favorite places from the show were not shot in New York at all. Here is the list of 13 outdoor shooting spots of FRIENDS you ought to visit:

Thompson Street used to be home to the charming Moondance Diner. Monica was forced to work here and to wear rollerskates and a blonde wig as one of the diner’s waitresses. The Moondance Diner is in SoHo and had a revolving moon sign in it. The Friends landmark has been torn down for a luxury condo block.

Ugly Nak*d Guy was mentioned frequently in the early episodes who lived across the street from Monica and Rachel. It’s located at 19 Grove Street, where Ross also lived. His apartment is now featured on virtual travel guide Roadtrippers as its own listing. 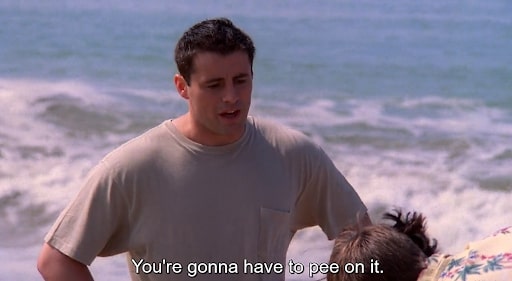 Do you remember that memorable scene, where Monica was stung by a jellyfish at the beach and Chandler urinates on it to relieve the pain? That famous episode “The One With The Jellyfish” was filmed at Leo Carrillo State Park on the coast of Southern California. FRIENDS fans might get a chance to meet the stars of the show there if they too plan a holiday around the same time.

The London episode features several notable cameos. Among them, one is featured by Richard Branson. There he sells a Union Jack hat to Joey on Trinity Square. It is located just across from the landmark, Tower of London. FRIENDS fans who are planning a trip to London must visit Big Ben, Buckingham Palace, and Westminster Abbey. These all are featured in the series too.

Do you remember Joey’s memorable words, “London, baby!”? It was filmed at the London Marriott Hotel in Grosvenor Square. In the episode “The One With Ross’s Wedding”, the gang goes to London to celebrate Ross and Emily’s wedding. The London Marriott Hotel is where Joey and Chandler “go into the map” by stepping on a three-dimensional map. FRIENDS fans could surely recreate the moment.

This is the famous fountain where all the six characters danced around during the opening of each episode of the show. It is the most iconic symbol of the show. However, it was just a prop on the set and not the actual fountain in New York. Reportedly, the inspiration behind the fountain was from The Pulitzer Fountain in Midtown West’s Grand Army Plaza and many FRIENDS fan visits there.

When Joey’s big break finally comes, he gets an important role in the hit movie Shutter Speed. They send him off to the desert, Vasquez Rocks State Park to become a star. It is located just outside of Las Vegas. When Joey reaches there, he finds out that the film is closed and it is not his big break.

Caesar’s Palace was a symbolic spot throughout the FRIENDS series. It is located in Las Vegas. According to The Mirror, the creators of the show were quite certain that it would be a success and probably it was the last time they had a party in anonymity. Later, they decided to have Rachel and Ross’s wedding take place at Caesar’s Palace after the show became a wild success.

The Plaza Hotel is the place where Monica and Chandler’s engagement was celebrated by toasting a glass of champagne. It is located on the south side of Central Park, on the border of the Upper East Side. The 20-floor Plaza Hotel has been named by the National Trust for Historic Preservation. It certainly is a significant slice of history for Friends fans as well.

10. The American Museum Of Natural History

Probably, you remember Ross Geller was a paleontologist who worked at the Museum of Prehistoric History. He worked there for the first five seasons of the show and, Joey too worked there for a while as a tour guide. The Museum of Prehistoric History in Central Perk was none other than The American Museum of Natural History. It is located in the Upper West Side of Manhattan on West 79th Street.

Bloomingdale’s is the place where Rachel gets a job as an assistant buyer. She decides to pursue a career in fashion during the show’s third season and quits her coffee shop job after encouragement from Joey and Chandler. It is located at 1000 Third Avenue. It is a 30-minute subway ride away from Bedford Street, where Rachel lives.

In the show, we were always confused about what Chandler exactly does for a living. Well, as it turns out he works as an IT procurement manager. His office is in the Solow Building on West 57th Street. It is one of the most expensive real estate around the place. Of course, you can’t go inside, but you can pop by for a look at the landmark.

Warner Brothers teamed up with Eight O’Clock Coffee and surprised their fans with the real Central Perk on the 20th anniversary of FRIENDS’ debut episode. It is located in the SoHo neighborhood of Manhattan at 199 Lafayette Street. According to Time, they used the iconic orange sofa in the cafe as well as made the same storefront. This all set up was a temporary idea but it became so hit that in 2018, Warner Brothers secured it permanently that also has the logo from the show.

If you have visited any of these locations, then please share your pics in the comment section and make us jealous now! And for those who haven’t visited these places yet, what are you waiting for?